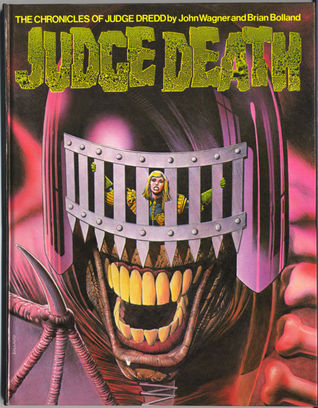 This volume of Mega-City One’s fascist lawman, contains two stories: ‘Judge Death Lives’ and ‘Father Earth’. To disguise the fact that John Wagner was writing so many strips for 2000 AD, pseudonyms were used, which is why you’ll see him credited here as both T. B. Grover and John Howard. Wagner wrote many great Dredd stories, and ‘Judge Death Lives’ may well be the greatest.

Judge Death first appeared three years after Dredd’s creation, finally giving him an enemy that couldn’t be easily defeated, with Death often described as Moriarty to Dredd’s Holmes. He could, however, be stopped. Here Death’s three cronies – Fear, Fire and Mortis – liberate him from his imprisonment. Once he’s back in corporeal form (an impressive sequence, one of many within the story) they go on the rampage.

Eventually, after much gorgeously-rendered mayhem, Dredd and Anderson follow the Dark Judges to their own dimension, and they are dealt with. At least until the next time, as Judge Death proves harder to kill than the Joker: he was to appear time and again in later Dredd stories, most notably Necropolis and the first Batman/Dredd team-up, Judgement on Gotham. Although, to be fair, and as he often likes to remind us: “You cannot kill that which doesss not live!”

This was the final complete Dredd story that Bolland was to draw, though he would return to draw one episode and assorted covers for 2000 AD. American deadlines suited his time-consuming style no batter, and he’d eventually drift into a career producing covers almost exclusively.

Bolland had the luxury of having a few months to work on the strip, though he still struggled to finish on time. He produced many roughs for the Dark Judges, and the designs he settled on are superb, with the fearsome foursome amongst the coolest-looking villains ever to appear in a comic. The front cover of this book is by Bolland and it also includes a handful of his Dredd covers and pin-ups.

Tight plotting, great characterisation and fantastic artwork combine to produce a lean, mean story that features some truly outstanding work, like Bolland’s incredible double-page spread of the four Dark Judges. It also includes one of the best panels in any adventure comic strip, ever, when Dredd answers Judge Fear’s lethal gaze with “Gaze into the fist of Dredd!” and a fist through the face! This story is a stone cold classic: the very best of Dredd.

‘Father Earth’ is shorter at 24 pages, but a bog standard Dredd story elevated somewhat by Bolland’s fine artwork in the first dozen pages. It was drawn just over a year into his Dredd career, and although impressive, it doesn’t have the impact of his later work. Ron Smith takes over for the remainder of the story. Never a fan favourite, Smith is accomplished and consistent, but his style always appears overworked, and looked dated even at the time, especially when compared to Bolland’s crisp, uncluttered artwork.