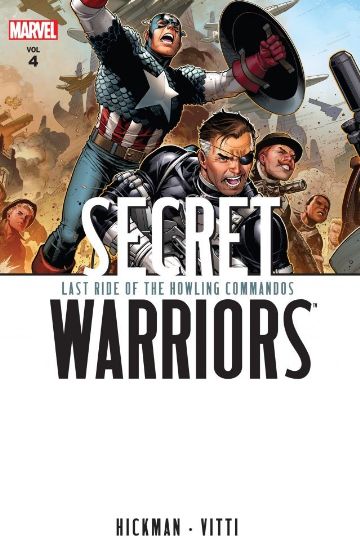 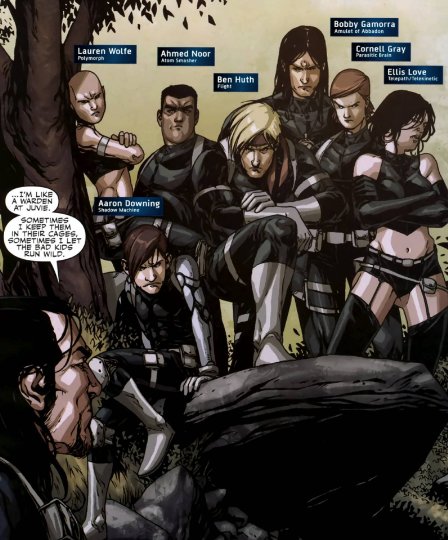 The die has been cast, Norman Osborn throwing everything he has at Asgard (crossing over loosely into the events of Siege) while Nick Fury aims his Howling Commandos at Hydra base Hell’s Heaven. Dum Dum Dugan and Jasper Sitwell face a UN Security Council enquiry into the events that took place in China behind closed doors, the pair relating their perspective on the battle. It’s told in flashback over a period of two to six weeks, giving the history of the Howling Commandos, their relationship with Fury, their first leader Captain America, and the bond of soldiers who remember their fallen comrades.

Writer Jonathan Hickman and artist Alessandro Vitti hit their sweet spot in this story, the best of the series so far thanks to its heartfelt and bitter-sweet narrative. For those only familiar with the Howling Commandos of the Marvel Studios productions Captain America: The First Avenger and Agent Carter, this is a wonderful and moving introduction to the group of grizzled old war veterans. Brotherhood and honour are strong themes, Vitti expertly catching the tension of the UN enquiry and the bond between these soldiers who have been through so much together. The number of flashbacks tends to interfere a little and certainly can confuse, but Hickman and Vitti really excel at the emotional aspects. Some of the best frames are those with no dialogue, the emotion in the facial and body language telling the story so well it brings a lump to the throat on more than one occasion. One well caught scene is Gabriel paying respects to his fallen comrades in a toast, very respectful and without over-much bravado. It conveys a familiarity with the heroism, patriotism, brotherhood, and of course the brutally heavy cost of war on the human soul.

Without the previous three volumes or even a rudimentary knowledge of events throughout Dark Reign and Siege, this doesn’t exactly stand alone too well. If anything it suffers mostly because it is one part of a very long and over-arching storyline that started even before the events of Civil War.

Appearances to the contrary, by the time you reach the end of this story it is far from over and we return to the Secret Warriors as they try to finish Hydra once and for all in Night. However, you are more than likely to develop a deep admiration and affection for the old war dogs of the Howling Commandos before you get there.

This is also available along with the following two volumes in a bulkier paperback The Complete Collection Volume 2, and with all other Secret Warriors material in an oversize Omnibus edition.