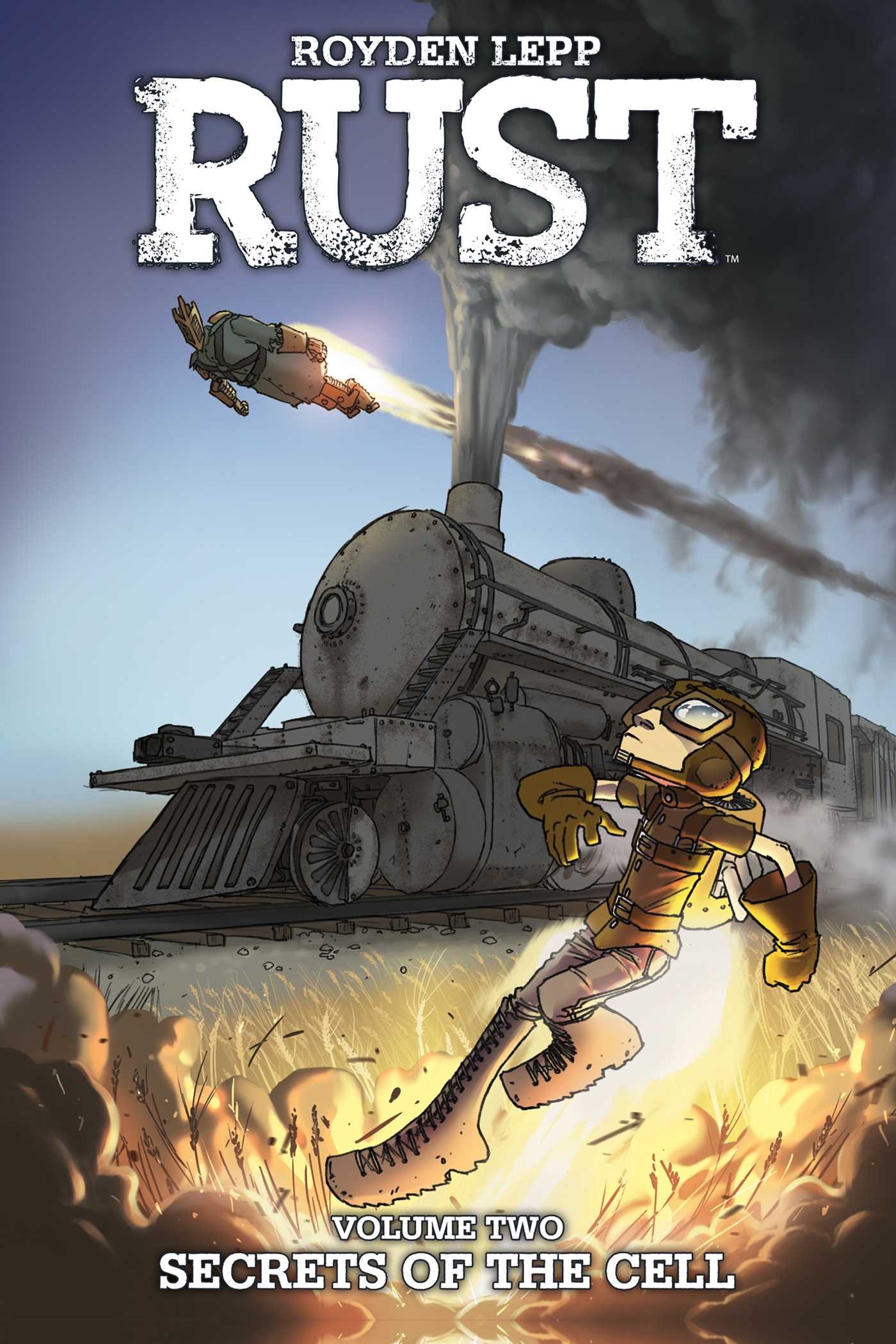 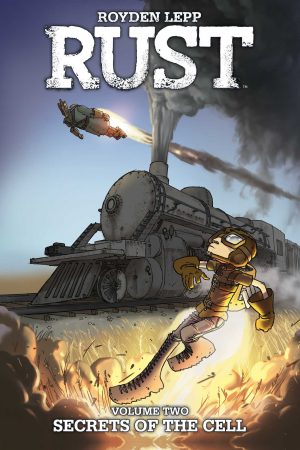 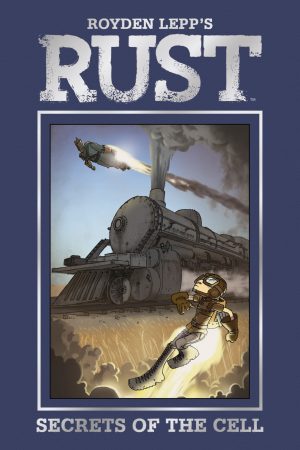 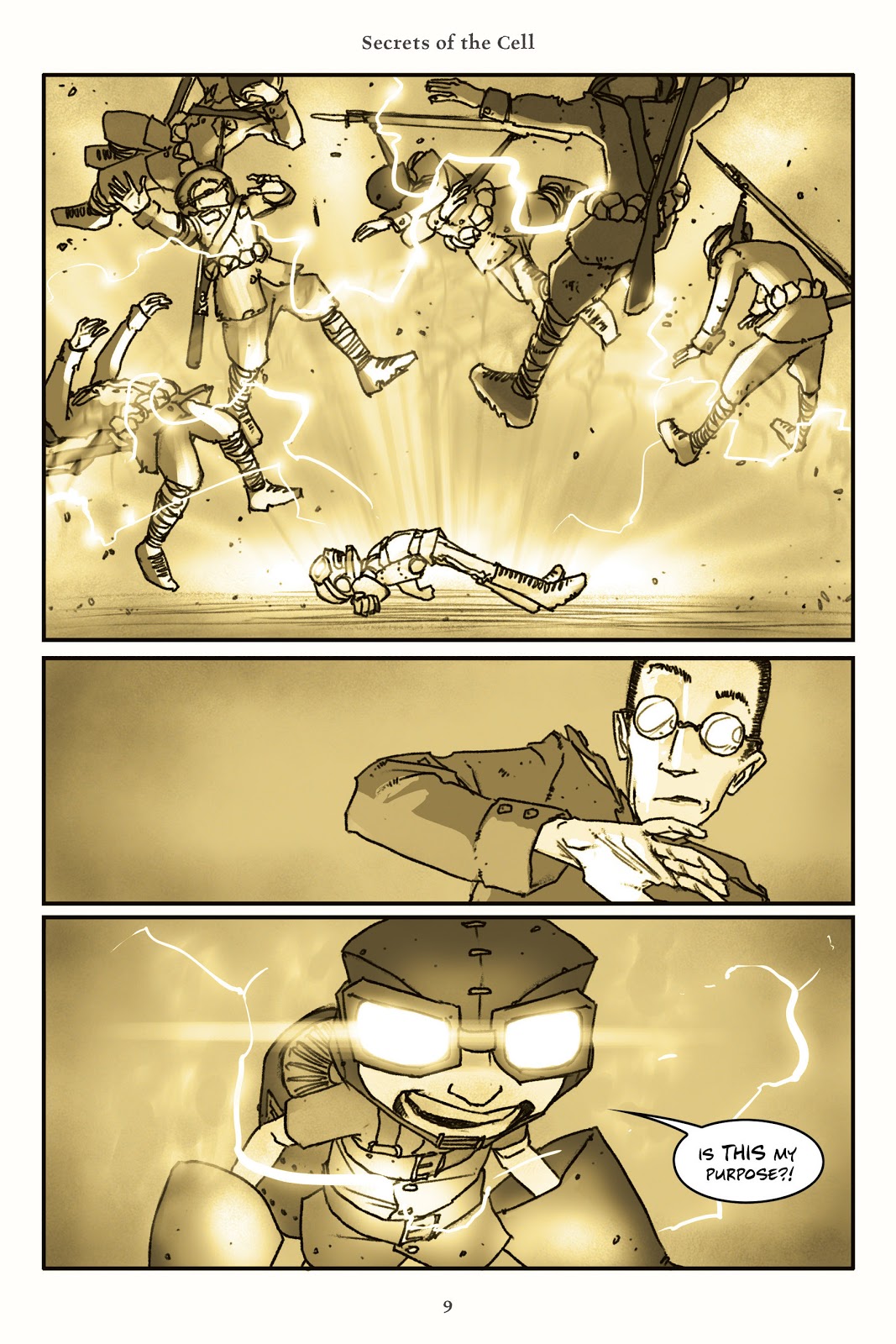 He set about it leisurely, but Royden Lepp certainly captivated with his opening volume of Rust. A prologue detailed a war 48 years previously, also referenced later, but most of Visitor in the Field took place on Roman’s farm. A flying boy with jetpack and goggles he never removes crashed there, almost immediately followed by a giant robot intent on killing him. It was stopped, but Jet keeps his secrets, and Roman doesn’t pry.

This an alternate Earth, but one with recognisable comforting qualities, Lepp reinforcing the serenity and timelessness of farm life via lingering scenes of wheat fields and wide open spaces in sepia tones. Calm is narratively important, reinforced by Lepp separating scenes via illustrations of grass in the wind, raindrops on a path or everyday occupations like washing up. He’s very particular about the experience, not just placidity, but the rush of movement, blurring the art to indicate the speed at which its being passed.

Much about the war remains secret, but what is known is that mechanical killing machines were used to replace soldiers, and remnants of those devices can be found and reprogrammed. Roman’s reconstructed a model as a farm helper. Occasionally there’s a glitch, causing the machines to become problems. What Roman doesn’t know, but Lepp has revealed to readers, is that Jet is a more sophisticated, humanoid robot. However, that secret doesn’t last long here. It opens into a fascinating explanation of the technology, updated steampunk if you will, with all robots powered by a form of clock known as a cell. “These cells were marvellously designed”, explains a neighbour, “they literally self destruct. They explode once they’re fully dismantled. That keeps the secrets of the cell safe from the enemy”. Who the enemy actually is/was remains undisclosed, and the destruction mechanism is a marvellously simple device preventing even adept mechanical tinkerers from reverse engineering. However, the full properties being unknown has its own dangers.

A final chapter concludes with a beautifully juxtaposed sequence in which one fight describes another. For a second volume Lepp presents serene isolation undergoing significant disruption, innocence corrupted, and the demand to consider how much form defines perception. It’s emotionally draining and wonderful. Rust continues with the horribly foreboding title of Death of the Rocket Boy.