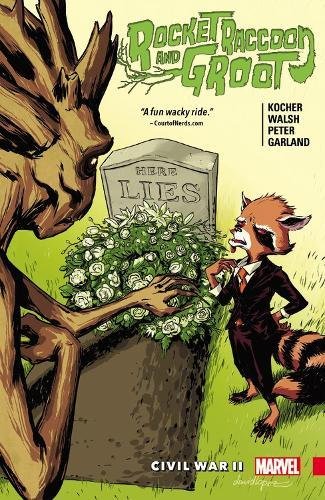 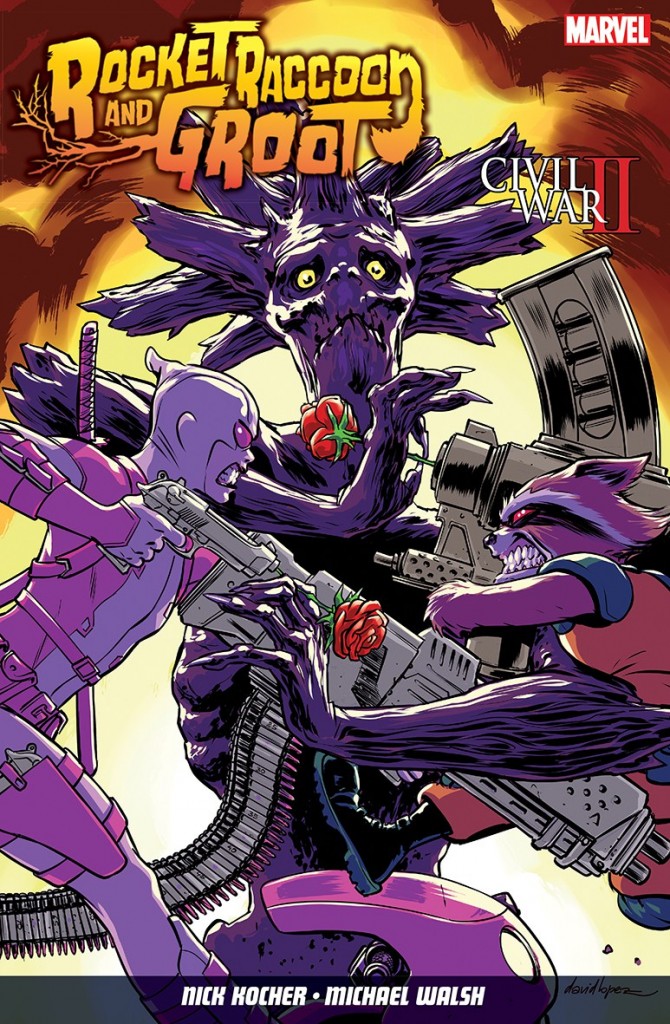 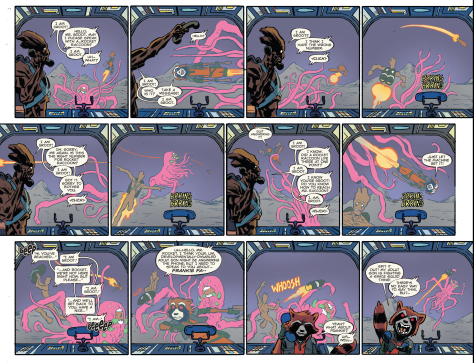 Tricks of the Trade recast Guardians of the Galaxy buddy act Rocket Raccoon and Groot as madcap animated surrealists. While also ranking high on the whimsical scale, so united in spirit, the injection of some plot by new writer Nick Kocher is extremely welcome.

As the cover shows, Gwenpool’s popped in for a guest shot, and her stream of consciousness motormouth personality fits right into a story that actually has very little to do with Civil War II. In that case the cover’s deceptive. Civil War II occurs in the background of a few panels, and gets along very nicely with no participation from out title stars. They’re more concerned with Chammy, an alien criminal recently located on Earth, who’s a nagging loose end from early in Rocket’s bounty hunting career. There may be bigger matters on the boil (see Civil War II), but Rocket’s secret self-serving plan is to settle an old score. Cue Gwenpool, team-up hi-jinks and more jokes.

Michael Walsh has a nice loose sketchiness about his art that often makes his characters seem drunk, which is fine for the tone of this book, and his comedy aliens are great.

Kocher’s new to comics, but has plenty of comedy writing experience as fifty percent of BriTANiK, and his plot for most of the book is consistently funny and entertaining. Gwenpool’s presence permits the breaking of the fourth wall as prospective story elements are underlined and discounted as unfeasible. Is Captain Marvel really going to be killed in a book titled Rocket Raccoon and Groot? No, but it’s at this point where the plot becomes more than a little self-referential and occasionally smug and tiresome. Still, that’s 90% of a good story over three chapters, and that’s without mentioning a funnier opening chapter in which Rocket’s called home for the funeral of an old friend.

Don’t like this version of Rocket Raccoon? Prefer him as straighter action hero, well, as the comic series was cancelled leaving Marvel a little short on a full graphic novel, filling out the back pages there’s Rocket’s first appearance in a Bill Mantlo and Sal Buscema Hulk story. That’s definitely not as funny as Mantlo believed.

While Kocher was writing this series when it was cancelled, the damage was surely done with Tricks of the Trade. The good thing about cancelled series is that the books rapidly drop in price, and this will be a bargain.