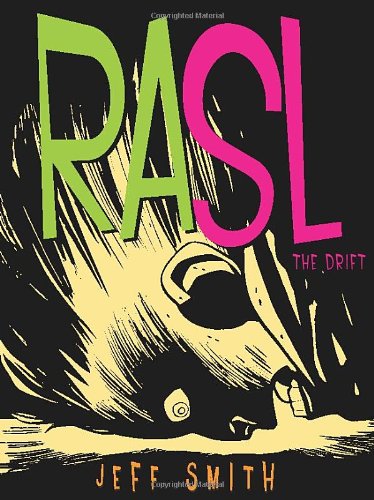 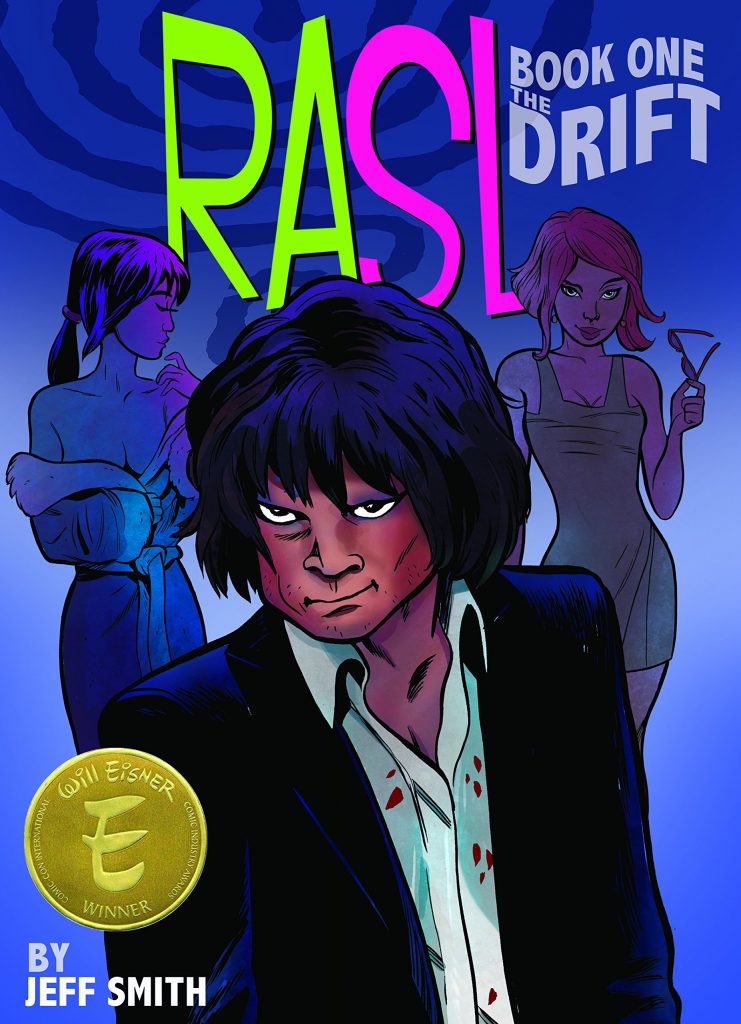 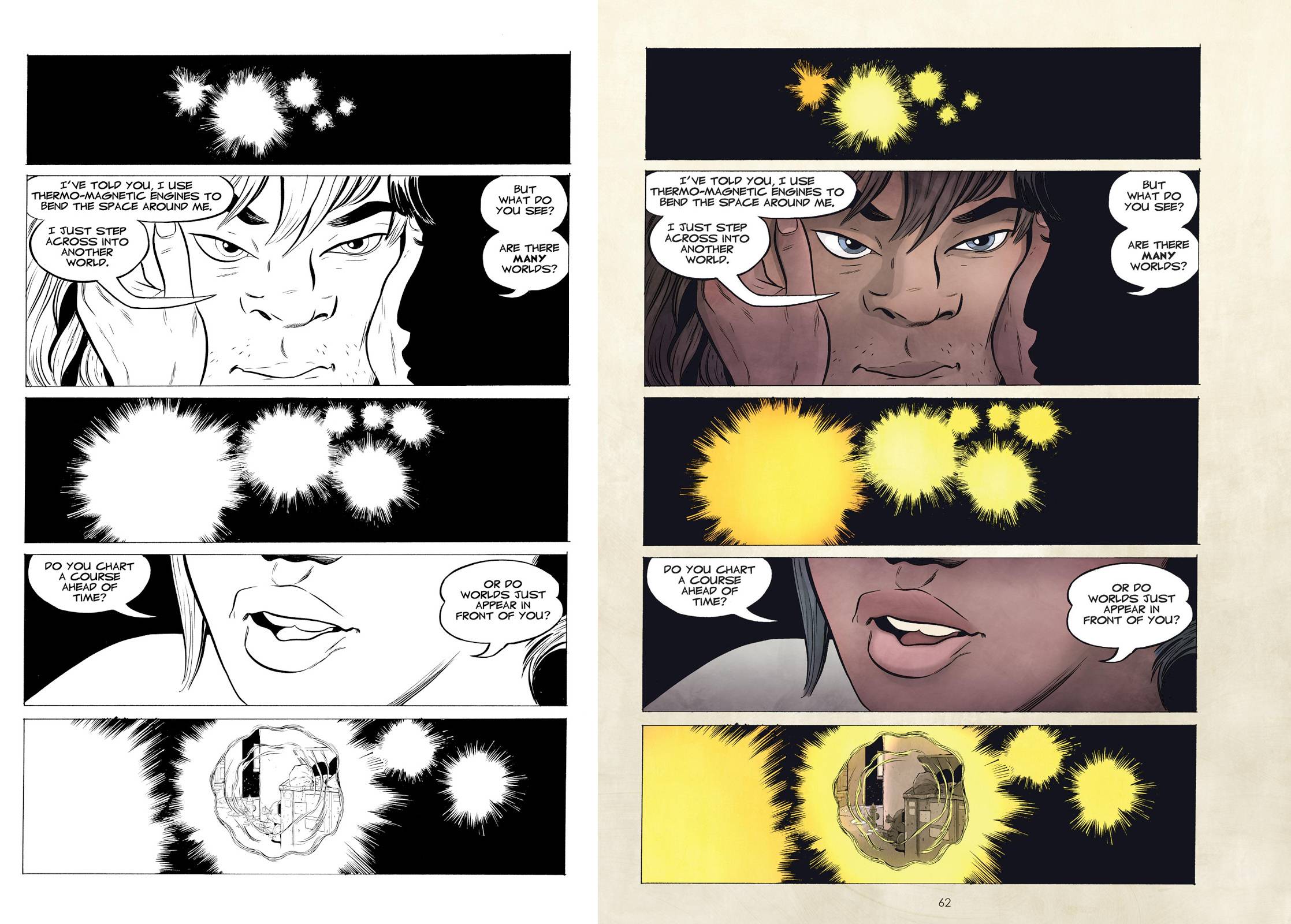 Having spent a considerable portion of his working life writing, drawing and publishing the Bone saga, is it any wonder that for his next project Jeff Smith moved into entirely different territory? Over four volumes, or one complete collection, RASL is a strange exploration of scientific possibility, a consistently thought-provoking and imagination-bending miasma telling a tragic story.

An art thief signing his crimes as Rasl travels between alternate Earths by using thermo-magnetic engines to bend space around himself, as shown in the opening chapter and explained in the second, the visuals surely influenced by Jack Kirby. Some variant Earths are only distinguished from his core Earth via minor differences, a recording artist named Robert Zimmerman instead of Bob Dylan, and travelling through what Rasl refers to as the Drift takes its toll. This is before factoring in beings intent on stopping him and his dissolute lifestyle, Smith emphasising that choices may be random, but they have consequences. Despite not being a sympathetic protagonist, and one who gives little away, Smith deftly ensures there’s an undercurrent of sadness and regret to Rasl, who’s seen at different stages of his life. How the Rasl seen over the first pages battered and stumbling through the desert relates to the person followed through most of the following pages isn’t clear, but by the time The Drift ends most of the background has been delivered.

Is Smith’s art under-rated? To begin with it seems too many years drawing exaggerated cartoon humans for Bone’s world has left Smith short when producing more figurative humans, but that’s quickly overcome as we’re sucked into Rasl’s world. Smith features plenty of single panel abstractions separating Rasl’s activities, effective splodges of white on otherwise black rectangles, most sequences representing a form of isolation, such as the single pebble dropping into water. The symbolism presumably reflects Rasl’s ripples, the effect of what he does, and it’s a neat visual device. Look at any individual panel and it’s interesting at the very least, and often a superbly composed illustration. The technique is first rate, the linework elegant and the storytelling refined.

Three long chapters extend over a hundred pages building what Rasl is without joining all the dots. They add to the tragedy in his life and provide a persistent opponent also capable of travelling the dimensions, seemingly representing a sinister, controlling body. The Fire of St George continues an already intriguing series.

Both volumes are combined with added colour in the Eisner Award winning RASL collection, and Smith has broken that down into four volumes matching the original pagination. The colour works for brighter scenes, but those are limited, meaning there’s not a lot of variety to dull pages that worked better in the original black and white. That should be the format of choice, and all links lead to it. 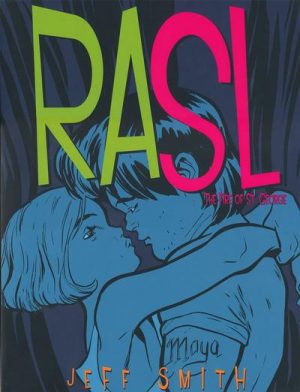 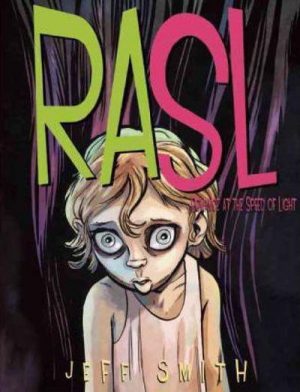 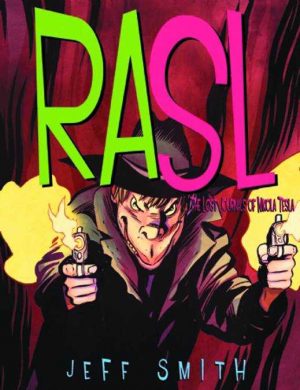