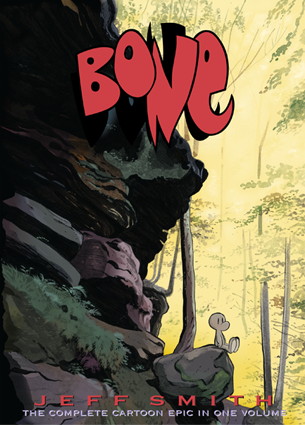 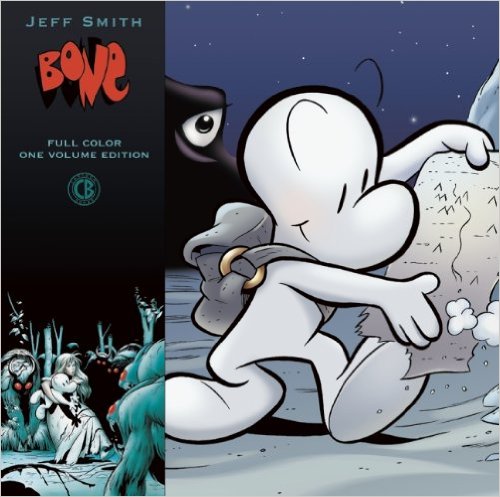 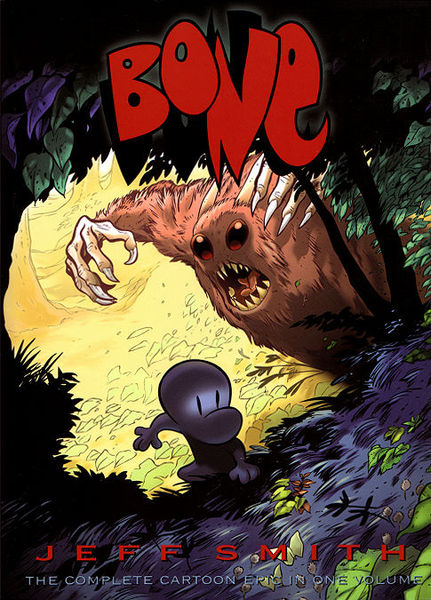 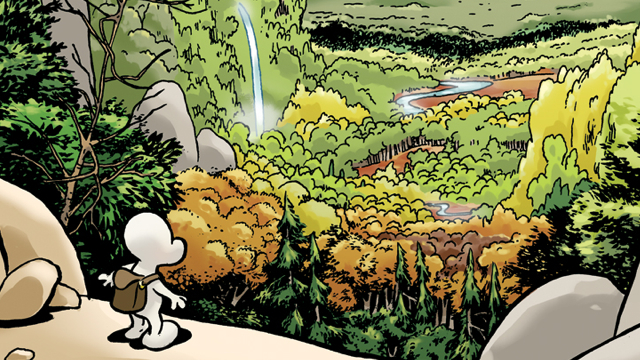 Writer and artist Jeff Smith suckers us into Bone with his beguiling cartooning, and opening chapters concentrating on three simple and appealing looking cartoon blobs, and before you know if you’ve become engulfed in a vast fantasy saga. The blobs are the Bones of the title, cousins, and they’ve been evicted from their community after Phoney’s campaign for mayor enraged the citizens. Phoney is conniving and materialistic, Smiley dim, and Fone the heart of the series, conscientious, loyal and considerate.

After some bumbling about, the Bones chance upon the humans of Barrelhaven, most particularly the teenage Thorn and her crusty old Gran’ma Ben. Smith explores the eccentricities of village life before launching into the tale he really wants to tell, which is a perilous situation into which the Bones have inadvertently stumbled.

We’re introduced to a princess, dragons, an enormous mountain lion (equivalent to the Fenris of Norse legend), a hooded villain reporting to the ethereal Lord of the Locusts and legions of speaking hairy rat creatures led by the fearsome Kingdok. At stake is nothing less than the future of the world as its known.

The first impression Smith makes is with his superb cartooning. The locations, cast, and action scenes are all stunningly illustrated. He imbues the amorphous blobs with life, creating completely credible characters with a full range of emotional responses, which is a masterclass in itself. Their intrusion into the fairy tale mix of humans and mythical creatures raises not an eyebrow.

Move beyond the cartooning, and the writing is equally accomplished. Smith’s background in animation has instilled a great sense of comic timing, and by the time the majority of the background has been revealed, around two-thirds of the way through the book, the full picture has an astonishing scope. Smith’s not just drawing on fairy tales, but on real world beliefs, twisting them slightly to suit his needs. The cast flow and develop as the story progresses, and by the end we’ve been taken into some very dark areas.

Bone is a wonderful achievement, and these monster collections are probably now the best way to appreciate it. There’s a choice of black and white or colour versions. The colour was added for mass market publication, and while good, adds little to the story itself, but there are plus and minus points to both alternatives. Where the colour version might be considered superior is that it was slightly re-jigged, dialogue altered, extra pages added, some cut, and other tinkering in order to make the story flow more smoothly. Weighed against this is that the mass market audience was perceived to be younger, so the dialogue has been simplified. The black and white version reprints the comics as originally published. Both One Volume collections incorporate material that never made the nine original collections, which start with Out from Boneville. These extras are shorter stories produced for magazines other than Bone, or as promotional giveaways. While none are essential to the ongoing plot, the diversions are of the same standard and welcome additions.