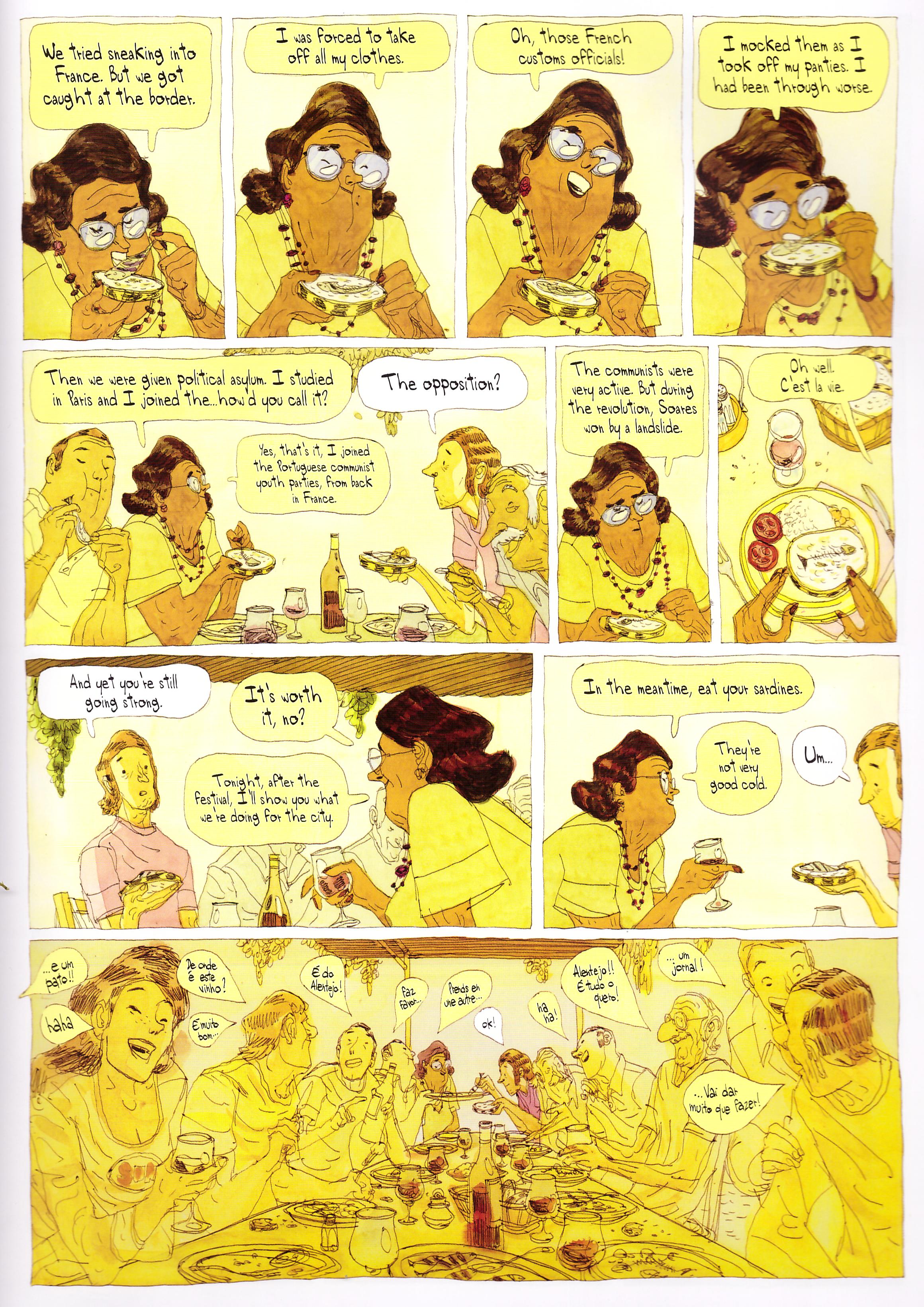 The Audience Prize at the 2012 Angoulême International Comics Festival was awarded to Cyril Pedrosa’s Portugal. It’s an immense work that unfurls very slowly and concerns itself as much with what’s not said as what is. Pedrosa captures this well, with numerous panels of Simon Muchat twisting in the wind, unable to express his feelings even with relationships at stake. This lack of expression extends to his work also. After a widely acclaimed book he’s been unable to create anything of substance, and has drifted into employment as a visiting art teacher.

It’s difficult not to draw parallels between Pedrosa’s own lack of activity between the 2008 publication of Three Shadows, winner of a secondary prize at Angoulême, and Portugal, and it hurts the book overall. The first hundred pages are set-up for what follows, establishing Muchat’s discontent, along with the strange feeling of calm achieved on a promotional trip to Lisbon, birthplace of his grandparents, and where he still has relatives he chooses not to visit. Pedrosa’s character establishment is good, but his pacing is questionable. While more personal than what follows, and featuring some elements required to set that up, this opening section is positively dull in places, with Pedrosa repeatedly hammering home the points made. After 95 pages to relate what could have been better told in a third that amount, there’s a suspicion that the Angoulême audience of 2012 got it seriously wrong.

They didn’t. The subsequent 166 pages are a glorious exploration of a family who’ve become distanced from each other, and the beginning of Simon’s path to recovery. Simon and his father travel to the remote French countryside for a wedding that reunites the family over several days. In contrast to the opening section, Pedrosa here applies a light touch, using conversations to explore the family history, and logically explaining Simon’s personality by contrasting him with his father, uncle and aunt. In different ways all have a stoic acceptance of events and the males avoid conversation about anything heartfelt, although have a way with an anecdote. The responses to assorted events during the wedding and its aftermath build the personalities of the cast.

A final section sees Simon returned to Portugal, this time contacting his relations and following up on family history. It’s not the be all and end all, but a mystery running from the mid-point is why Simon’s grandfather remained in France while his brother returned to Portugal. Abel Muchat never did, and Simon’s keen to discover why.

Pedrosa’s loose and expressive cartooning is wonderful. He brings a person to life in a few strokes, not just via facial expressions, but by posture and gesture, and the cast are implanted in some glorious locations. He does a wonderful job selling the French countryside and Portuguese villages. The visual metaphors in the opening section are a little contrived, but the one consistent reservation about the art is the colouring. It appears to have been conceived to reflect the prevailing mood, but the watercolour variations of a single shade frequently work against clarity. This may be also be deliberate as subtle evocation is key to Portugal, but it’s also frustrating.

Portugal overcomes the dreary and self-indulgent portions of the opening section to blossom into a glorious, rich dissection of a family’s dynamics, revelling in quiet moments, and cheerfully sweet passing encounters. It’s languid, melancholic, joyful and reflective, and removed from the opening pages would be five star material. The world becomes a better place when you switch your attention from yourself, and Portugal exemplifies that.