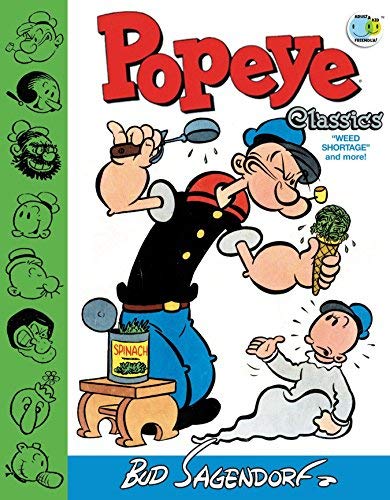 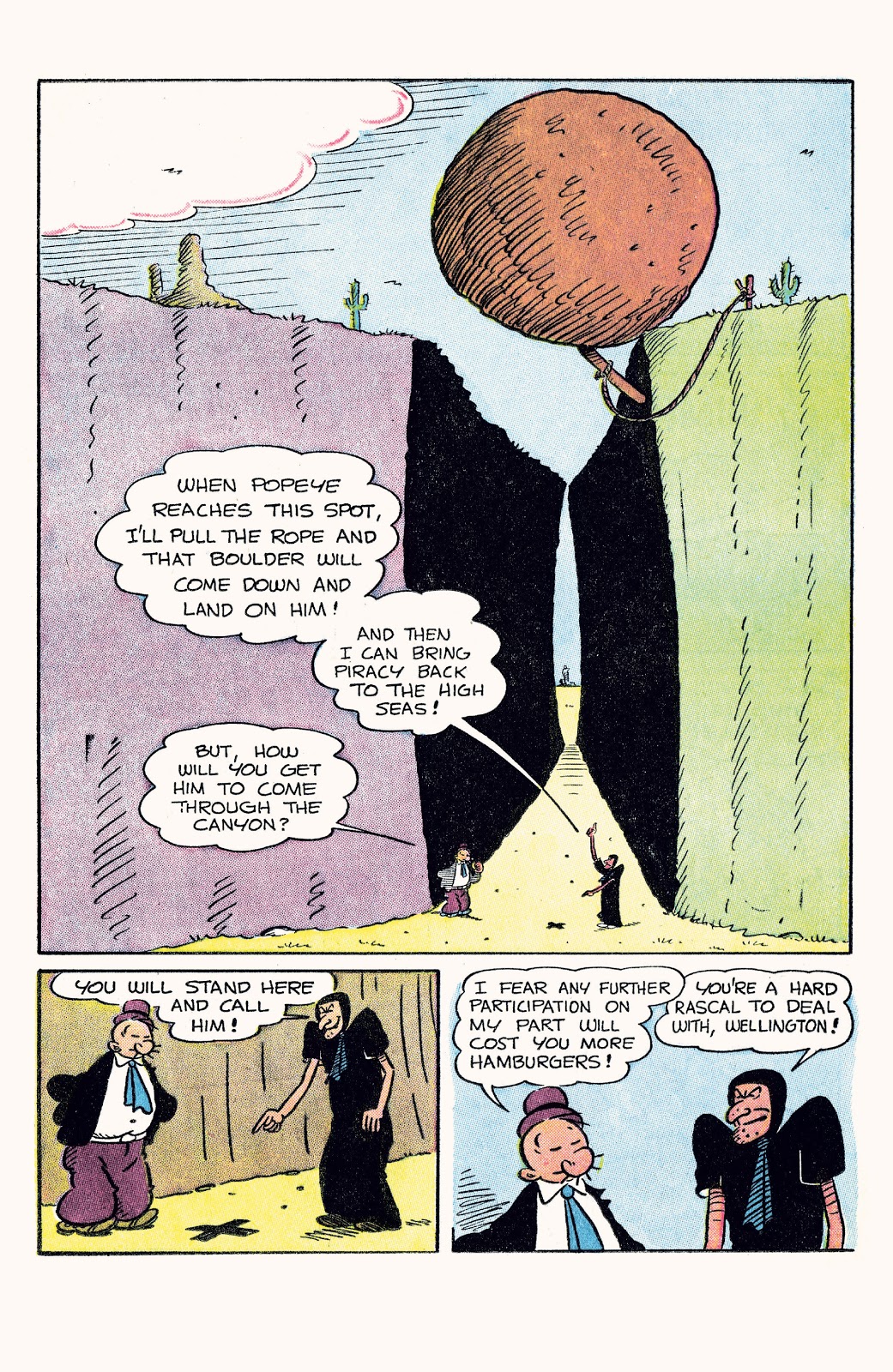 Collected in their entirety in this beguiling full-colour hardback are five more issues of Popeye comics produced by the irrepressible Bud Sagendorf, collectively spanning July-September 1953 to July-September 1954.

We rejoin the ceaseless parade of laughs, surreal imagination and thrills, with some stories with infant Swee’ Pea as the focus, a theme that continues throughout. ‘Shrink Weed!’ has some “wild spinach” reduce the old salt and baby Swee’Pea to the size of insects with potentially dire and outrageous consequences, while ‘Live Game’ finds infant Swee’Pea contending with a little Indian boy and his pet bear before teaming up to play a prank on the adults. Later Swee’ Pea stories include ‘Popeye and Swee’Pea in “Kid Raising!!”’, which finds Popeye and Olive using book learning to counter Swee’Pea’s pester power, while Popeye and Swee’Pea then clash as the little nipper tries boosting his strength with a spinach overdose in ‘Full Power!’ In a later piece the nipper even manages to bamboozle prize moocher J. Wellington Wimpy in ‘Moneybag! Or “Buddy, Can You Spare a Nugget?”’ when he sees Swee’Pea playing with Popeye’s bullion bags. They become allies, though, when Popeye refuses to give his kid a dime. Swee’Pea consults Wimpy and crafts a brilliant get-rich quick scheme in ‘Pay Dirt!’

In addition to his cartoon brilliance, Sagendorf concocts a wacky text fairy tale to open and close each reprinted issue. His first here has a cow named Harriet dealing with her unlikely passion for baked goods, echoed in the next, ‘Cat Fish’, when an inner-city moggy imaginatively satisfies a yearning for fresh fodder. A parable about a blacksmith’s cat discovering a new toy in ‘Space Ball!’, an alley cat promises a slap-up feed for his pals and ‘Nine for Nine’ has Garry the Cat playing fast and loose with his stockpile of spare lives. They’re not drawn, but they’re as madcap as the features that are.

Back-up feature Sherm is only seen once, succumbing to the juvenile blandishments of the girl next door in ‘Ah Love!’ The resourceful kid is shunted out by Axle and Cam, a robotic father and son, who début in a wild romp featuring a spare-parts scavenging rogue called the Black Mechanic. The clever kid later constructs a junk yard dog from junk yard junk, has trouble as the junior robot starts copying human kids and their bizarre games, and Dad Axle swept off his feet by Junior’s latest invention.

As ever, the restorative power of spinach is stressed, first in ‘Weed Shortage” or “Pass the Spinach!”’, which finds the sailor man scuppered by a global spinach blight, and in the final tale’s confrontation with the Sea Hag. She unleashes magical menace ‘The Boo-Bird!’ in the certainty that the old salt has no defence. That reckons without Olive, or spinach!

Outrageous and side-splitting, these all-ages yarns are evergreen examples of surreal narrative cartooning at its most inspirational. This book is definitely top-tier entertainment for all those who love lunacy, laughter, frantic fantasy and rollicking adventure.