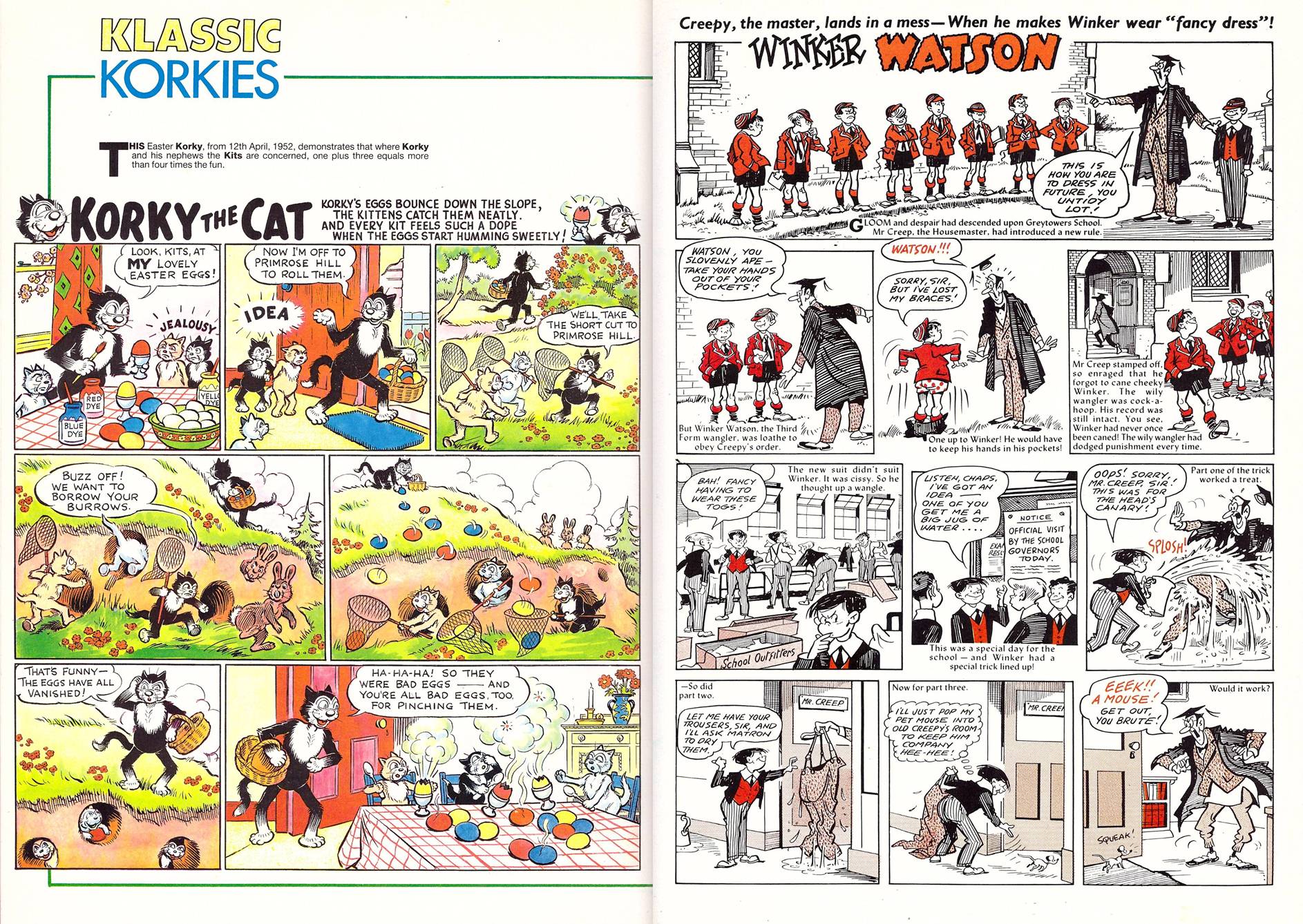 There’s no understating the importance of The Dandy and The Beano to both British comics history and popular culture, and 1987 publishers D.C. Thomson issued this well planned hardcover spanning highlights. If you take the spine as the title it reads The Dandy and the Beano – Fifty Golden Years, rather than the cover’s The First Fifty Years. Either alternative adequately conveys the content. In the late 1930s replacing much of the traditional text accompanied by illustration with comic strips revolutionised children’s publications. The Dandy was rapidly followed by The Beano, and by the 1950s D.C. Thomson published several other weekly anthologies with equally archaic names like Beezer, Topper and Sparky.

In hindsight the 1930s innovation from an always very conservative and traditional publisher seems uncharacteristic. Not a single writer or artist’s name is mentioned throughout the book, while pictures of celebrities are frequent, and pride in a congratulatory letter from then Prime Minister Margaret Thatcher is shown by allocating it a full page. Ignore the lack of credits, and this is an enlightening and fascinating skim through the comics’ history, and takes an admirably broad approach to inclusion. The star turns such as Dennis the Menace, Desperate Dan and the Bash Street Kids are given greater space, but not at the cost of entirely squeezing out lesser features. Articles contextualise the strips, placing them alongside historical events.

A strangely guileless editorial presence results in some questionable decisions. Fair enough that samples of World War II era strips reducing Hitler, Goering and Mussolini to knockabout comedy idiots are included, but should they have been accompanied by a large picture of Hitler and stooges giving the Nazi salute? On the one hand it’s nice to see Dudley D. Watkins’ great illustration of Desperate Dan holding up a dozen people, but even in 1987 some would have been considered racist caricatures. The inclusion of later disgraced celebrities among those professing their love for the comics was obviously beyond editorial control.

The obsessions of many strips even up to the 1970s reveal the past as a different country, but provide interesting social documentation, be it the continual threat of corporal punishment or the lives of others. All too often there’s a wish for more of the strips, Jack Prout’s delicately drawn Black Bob for one, and while the greats like Leo Baxendale and Ken Reid aren’t credited, they are present. The sample spread combines James Crighton’s neat cartooning for Dandy cover feature Korky the Cat, and the distinctive art of Eric Roberts illustrating Winker Watson’s school capers.

Both comics just about lasted long enough to merit collections celebrating 75 years, but the print editions now struggle, and it’s probably only a matter of time before they’re consigned to the past represented by this nostalgic memoir. It’s more a book for historians than kids now, who’ll not connect with the world presented.