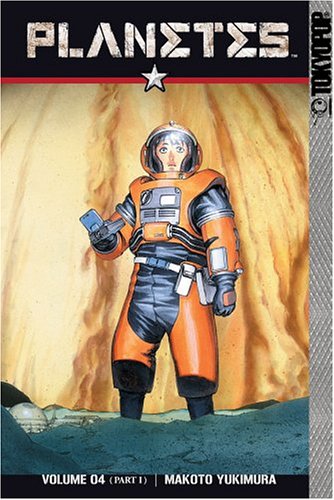 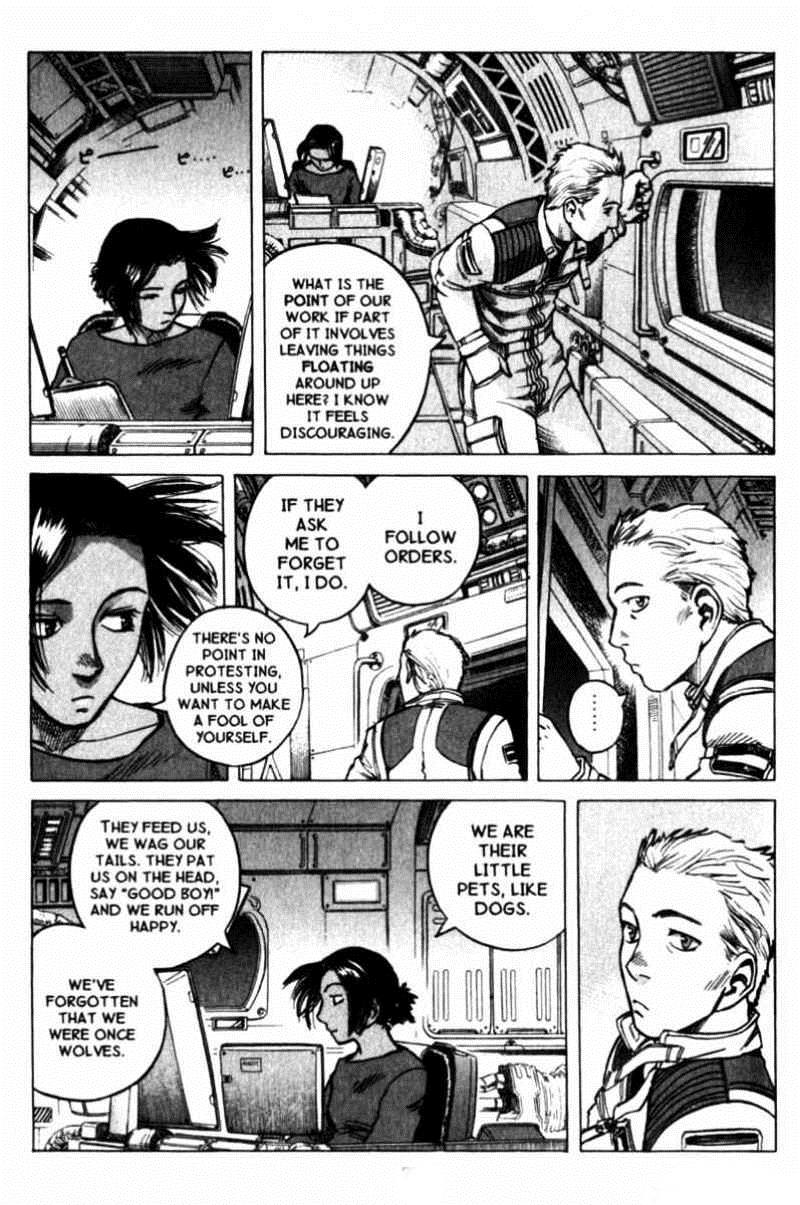 Planetes has developed from light comedy of space garbage collectors into a contemplation of man’s place in the wider universe, which makes it strange that this volume opens with a seeming return to the light comedy. Hachi, who’s been the lead character over the previous two volumes isn’t seen, as Makoto Yukimura instead looks back on other people whose stories seemed to have been sidelined. This is cleverly done, however, as time is still moving forward.

After the perhaps surprising events of Planetes 03, Tanabe is back to work with the DS-12 space garbage collecting crew, who have to deal with a new addition believing himself to be an alien, and constantly jotting down learned lessons about emotional responses in a notebook. That’s followed by Werner Locksmith, head of the Von Braun project, confronting the consequences of a past tragedy, rather glossed over in Planetes 02. It opens up a new interpretation of him. Is he just single-minded, cold and used to getting what he wants, or is there something more sinister about him? It’s a complete switch of mood from the opening chapter.

It’s also more representative of what follows, with the bigger picture changing dramatically. The third chapter begins with Tanabe questioning the point of there being space garbage collectors if some items are off limits, but develops into a look at Fee’s life and how sick she is with certain aspects of it. She’s an example of how smart the plotting is. In Planetes 03 Fee noted her son’s habit of adopting stray dogs, which at the time just seemed a comment in passing, but with her back home we see the consequences, and that expands into allegory in the final volume. Fee’s disenchantment leads into a discussion of Kessler Syndrome, mentioned when Planetes began, a real world theory concerning the possibility that a single loose piece of space debris could crash into something large. It would fracture and disintegrate with parts of varying sizes causing more problems, leading to a toppling domino effect destroying much of what’s in orbit around Earth. That’s relevant because while the DS-12 is in space, political events are moving rapidly on Earth.

It’s interesting that Yukimura hints at a nation chafing for war in space without actually naming them. Having their more reasonable side represented by someone named Colonel Sanders is a hefty clue, but then there’s a sequence of the USA threatening another nation. By the end of the five chapters there’s been an incredible escalation, so much so that readers will have forgotten about Hachi never being seen. Fee is especially well developed, her personality and past combining to prompt what she does, and there are some secrets about her still be revealed in Planetes 4.2.

What’s been a very satisfying read ends with a long text section explaining some of the science behind the stories and some speculation about the world that led to what we’re reading in Planetes. These chapters are alternatively available in the second Planetes Omnibus.