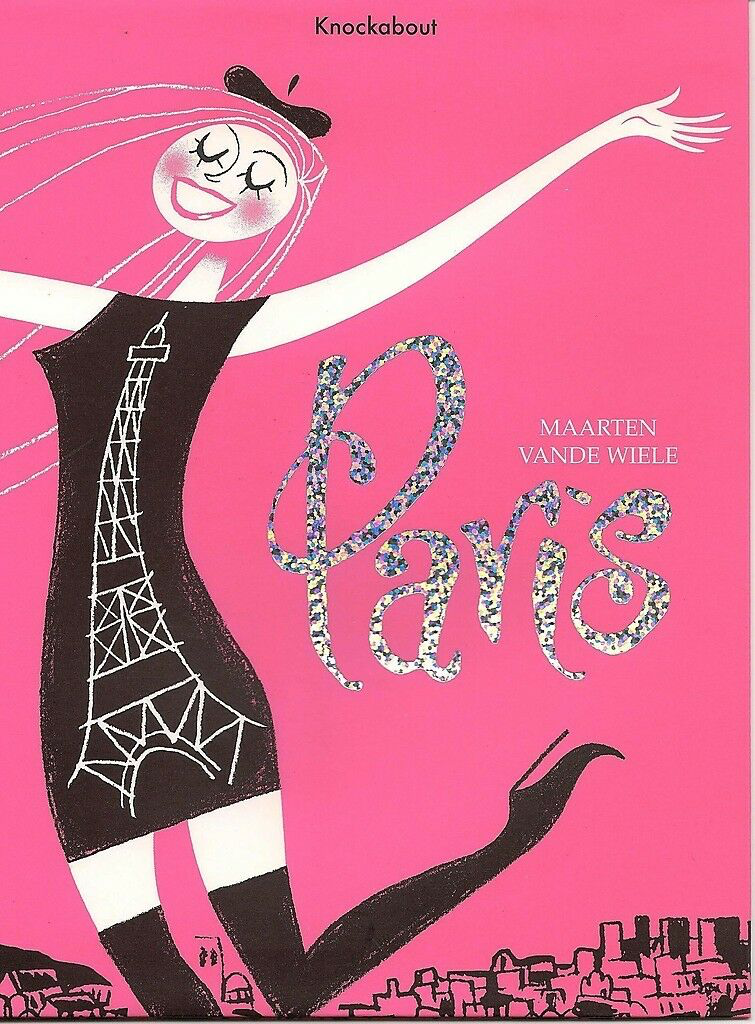 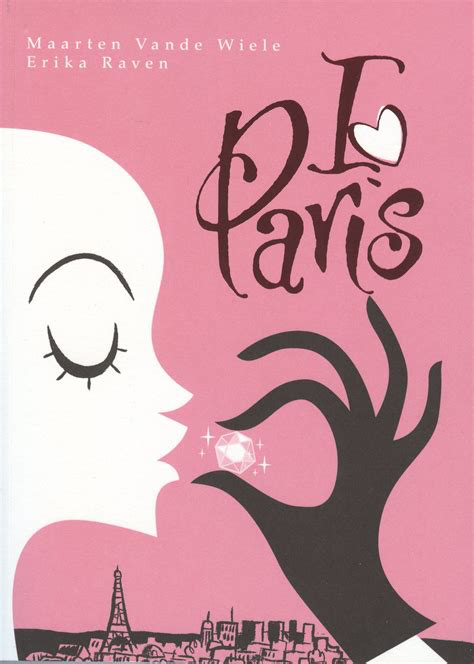 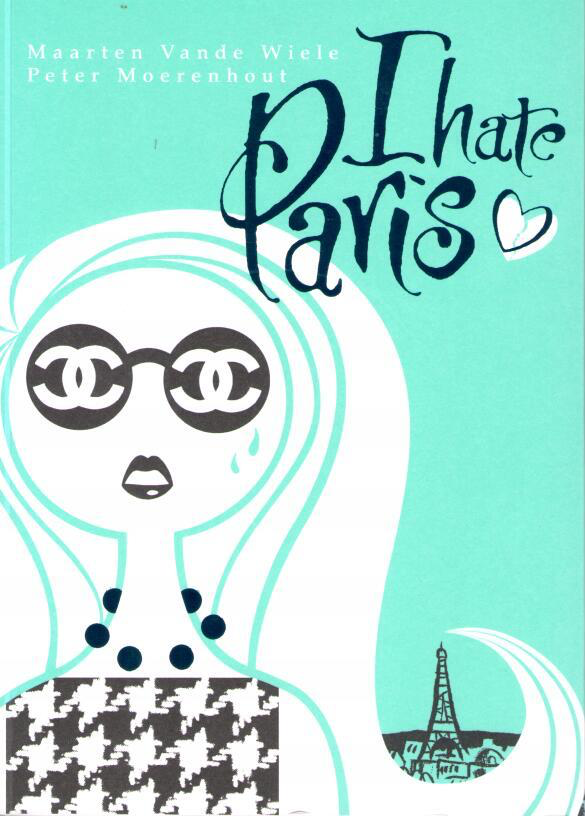 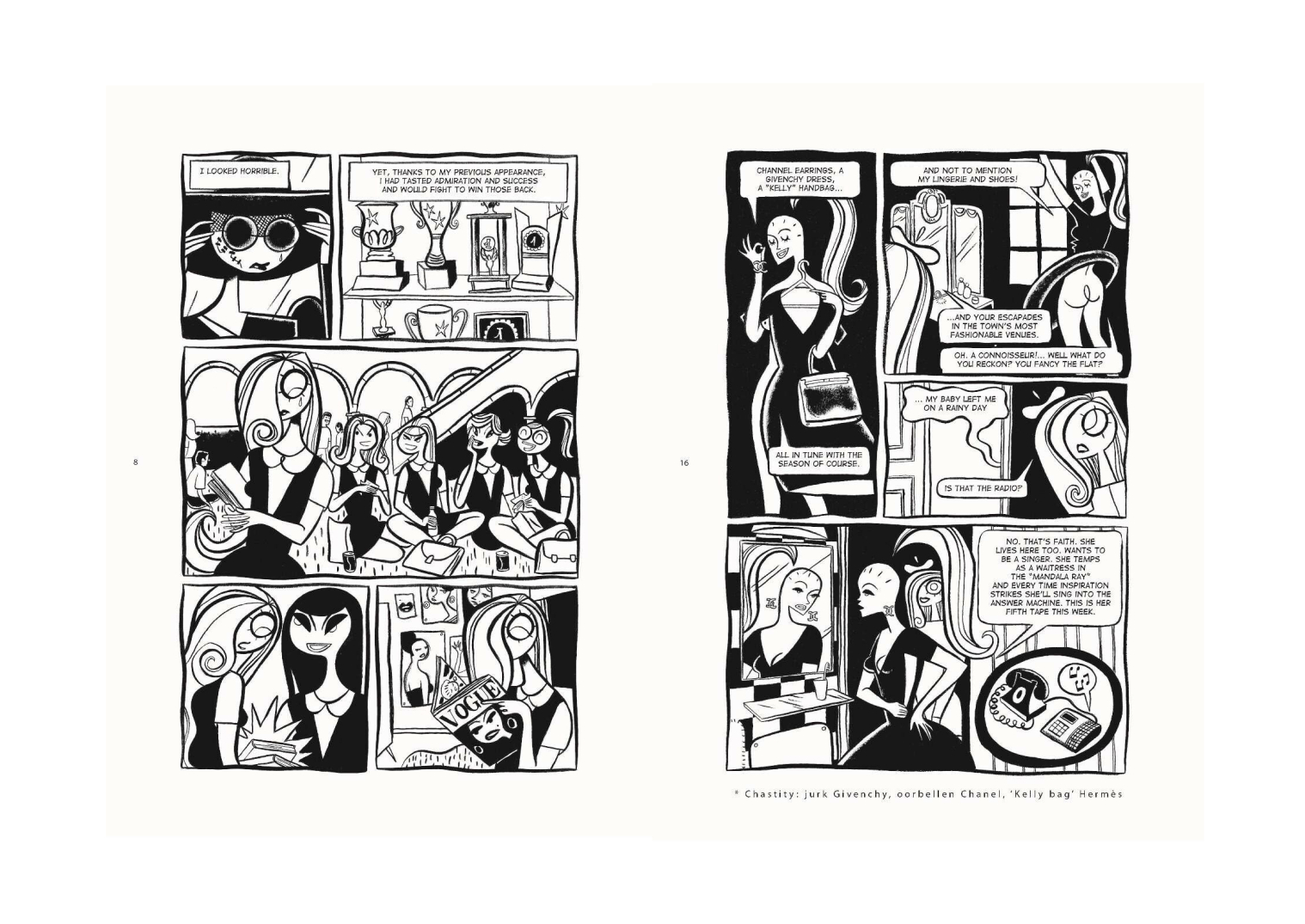 Paris is illustrator and graphic novelist Maarten Vande Wiele’s English language début, combining his European releases I [heart symbol] Paris, and I Hate Paris (alternative covers), into a single volume. He works with writers Erika Raven, then Peter Moerenhout to turn his love of comics and fashion into a satisfying graphic novel.

The sweet cover, and glittery logo might suggest a departure for underground comix survivors Knockabout, but the suggestive positioning of the Eiffel Tower hints at the hedonistic frolics within. Vande Wiele’s joyous cartooning and jazzy inking should also appeal to admirers of the publisher’s stalwart talent Hunt Emerson.

Paris is a wonderfully trashy soap opera of three young women seeking fame and fortune in the French capital. Faith seeks success as a singer and songwriter, while Hope, aspires to a career in modelling, and finally, Char… sorry Chastity, ironically is happy to trade on her allure more directly. As the original titles suggest, it’s a rise and fall story with a champagne and nose candy lifestyle both hard won and hard lost. Faith, finds bad faith in the music industry, Hope’s camera appeal is tempered by the scars from a childhood car accident, while Chastity is driven by a different childhood trauma. What may suggest a Hallmark style tear-jerker is saved by a light touch and mischievous humour. For example, Hope is delighted to be the subject of a photo-shoot by admired lensman Rico, who seems as taken with her face as her figure. However, on arrival at the exhibition launch she finds her scarred features have been replaced with those of housemate Faith, who’s hooked up with Rico into the bargain. The story of gold-digging Chastity plays out similarly inventively: when she strays from the fidelity expectations of her twilight years fiancé, it’s with previously well-matched couple Sebastien and Sébastien. All of that is in the rise or ‘love’ half, and there are plenty more twists and turns, as Vande Wiele and friends convincingly capture the price of success and the pain of it’s loss.

Vande Wiele’s art brings his professional illustrator slickness to his ‘true passion’ of comics. Also in the mix are the elegant lines of fashion illustration, and the expressive distortions of the city’s modern art pioneers. A genuine love of catwalk chic is evident in Vande Wiele’s appealing renditions of designer outfits, respectfully credited in footnotes (featured image, right). His characters have distinctive and expressive faces, though are perhaps too physically interchangeable, so losing the rationale of Rico photoshopping Faith’s face onto Hope’s similar body. Other key storytelling elements are fudged, like being unclear a conversation happens over the phone, and whether or not an irate shopper has physically assaulted would-be sales assistant Chastity. More significantly, in a pivotal early scene, it’s not clear what some sketchy cars and ink flourishes represent, until we cut to a funeral. Still, these niggles, and some saccharine over-stylisation (featured image, left) are near the start, and Vande Wiele finesses his style over two hundred pages.

Vande Wiele and co dress up high drama as light entertainment, creating a distancing effect that lets the reader have their own reaction to powerful events. He pitches it confidently, but could both better stage manage some key scenes, and helpfully linger on their aftermath.

Ultimately, Paris is an open-eyed, ironic, love letter to fashion, showbiz, sex and the city, and could also serve as a primer for young people feeling the allure of celebrity. It’s an appealing and page-turning book, and it’s to be hoped that more of Vande Wiele’s work will be published in English.