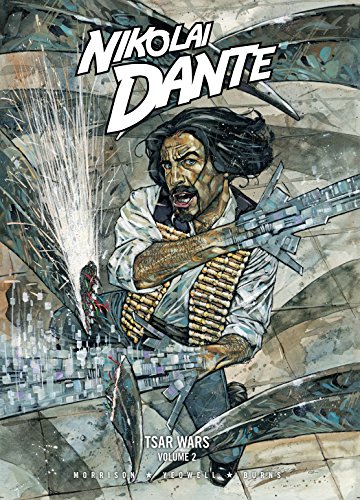 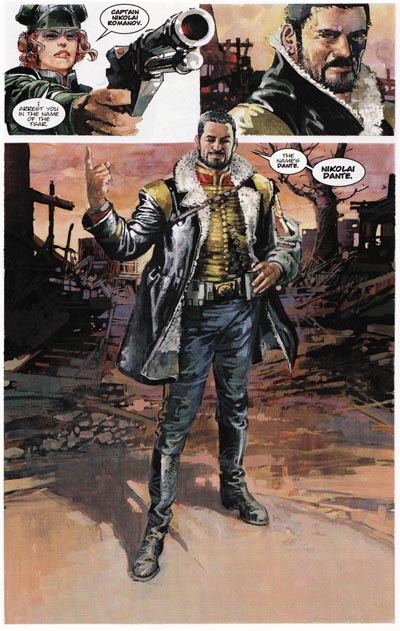 The opening chapters of the Tsar Wars saga were an intense and bleak affair so it’s a relief when Robbie Morrison takes us back to the roguish Nikolai Dante we have come to know and love. The ongoing war currently favours of the Romanov Dynasty and while Nikolai has now taken the name Romanov, his disagreement with Jena Makarov and the harsh realities of war and petty politics is driving him back to his defiant old ways. What ensues is a return to the House of Sin (see The Great Game) with his Irregulars, an encounter with three bored and “playful” sisters, and some vampire hunting before a return to the savage conclusion of this ego-driven civil war.

John Burns proves he has a funny bone with some great illustration work and comedic timing in the rather irreverent opening stories, one of which parodies The Polar Express. He has a great  artistic range and differs from his earlier work on the series, the style similar to Simon Fraser’s in some ways but also more European in others. It’s very good and the regal ambience only adds to the humour. When Burns and Morrison return to the serious side in the desperate events of the closing story, he proves it wasn’t a one off by helping to deliver some good laughs to break the despair even if they are pitch black. One scene in particular, depicting Dante’s defiance at a last-stand scenario, deserves to be enlarged and hung on the wall so that you can look at it when it feels like life is overwhelming you. Steve Yeowell’s work intersects with Burns, excellent in depicting an off-kilter vampire story. This is a science fiction series and 2000 AD, so as silly as that sounds, it isn’t out of place. Morrison delivers the funny but there is also redemption, victory, defeat, regret, despair and retribution galore. There are some good ideas and his artists help him blend those period drama charges with the futuristic decadence of science fiction. Morrison adheres to the notion that if a character’s death creates a better storyline then heave-ho, off you go. This has more than its fair share of violent exits, some make you cheer and others you’ll be sad to see occur. Morrison has crafted the cast so well that the reader connects quickly, and Tsar Wars is a great storyline with all the right components. When it ran Nikolai Dante was awarded an Eagle Award for Best UK Character, the first time in twenty years that it wasn’t Judge Dredd. It is a well deserved honour.

Our lovable rogue returns in Hell and High Water. 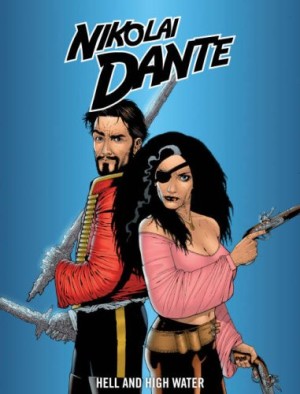 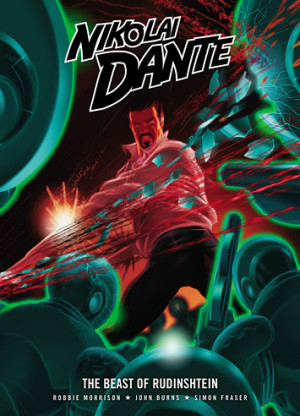