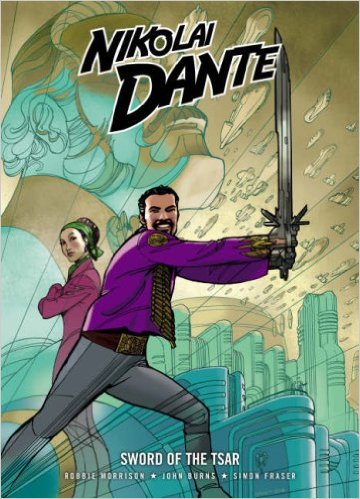 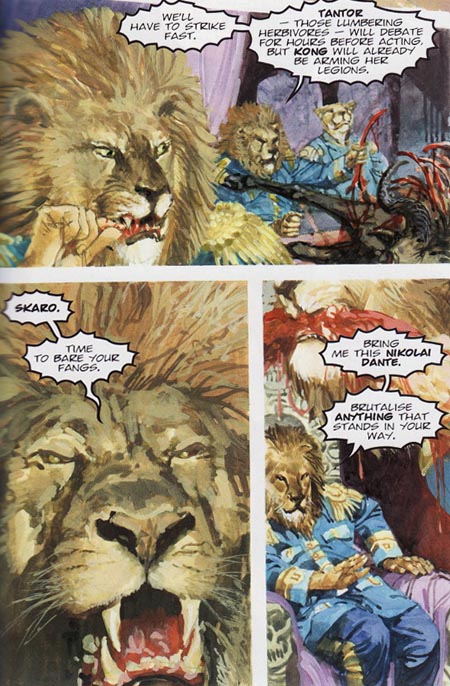 “There is something about your personality that drives normally rational women to act with ever-rising levels of homicidal mania!” – Crest

That about says it all for Sword of the Tsar. Well, not completely, because we don’t find out why it’s called that until the second half. In the mean time Nikolai Dante has to rescue some old friends, gather an army of pirates, bed half of his mother’s pirate crew, avoid being killed by half of his mother’s pirate crew, have a deadly family reunion and still look devastatingly sexy doing it. And as you may have already guessed there are a large number of women trying to separate Dante’s genitalia from his body, including Jena Makarov. Then there is the title story and Dante may have to make a deal with the devil himself in order to survive.

Robbie Morrison has a furtive imagination that that takes inspiration wherever it finds it. Disney films, Rudyard Kipling, heist capers, low budget sci-fi thrillers and believe or not, even the works of Sir H. Rider-Haggard. Thankfully he is never short of a sense of humour, irreverent as that may be, which makes this tons of fun. He even pokes fun at his own Scottish stereotypes, especially the Glasgow accent, but of course he knows how its actually meant to sound. John Burns flourishes with the change of scenery from the oceanic landscapes of Hell or High Water to terra firma, in turn taking his inspiration from bootleg posters and creature films to give opening tale ‘Primal Screams’ a nice pulp fiction aesthetic, with chimp concierges, pachyderm lords, leonine warriors and a wonderfully ruthless casino owner. The first third of the book revels in the shallow Dante we came to know and love in the first two volumes, the gags frequent if likely to be lost on younger readers.

“Who the blazes is that Vixen, Nicola?”

Other little problems are that Burns’ action sequences don’t always work and his anthropomorphic gorillas are too Planet of the Apes-esque, but the good news is that Burns has got his groove back since Hell or High Water and his work contributes more than its fair share to the high fun factor. When he heads back to the ocean he delivers some good naval battles and the inconsistency of the previous book is forgiven.

The last third sees Morrison moving his plot back towards the Makarov/Romanov storyline and Dante’s status as celebrity thanks to his escapades in title story ‘Sword of the Tsar’. Simon Fraser is back to help and, boy, is it ever a welcome surprise since his work opening High Water. It has improved dramatically looking modern, sharply detailed and nicely coloured in well placed frames with that lovely energy about it when Morrison and Fraser get together. It’s worth mentioning that the jump from Burns deliberately traditional style clashes with Fraser’s work where previously this hadn’t been a problem. In its original weekly serialisation, with big gaps between stories, it wouldn’t have registered, but the shift in style is sudden here. Fortunately it doesn’t take long to get used to.

Fraser’s modern aesthetic is very welcome and gives the series a new lease on life. This is a fun return to form for the trio generating anticipation for a return home in The Beast of Rudinshtein.