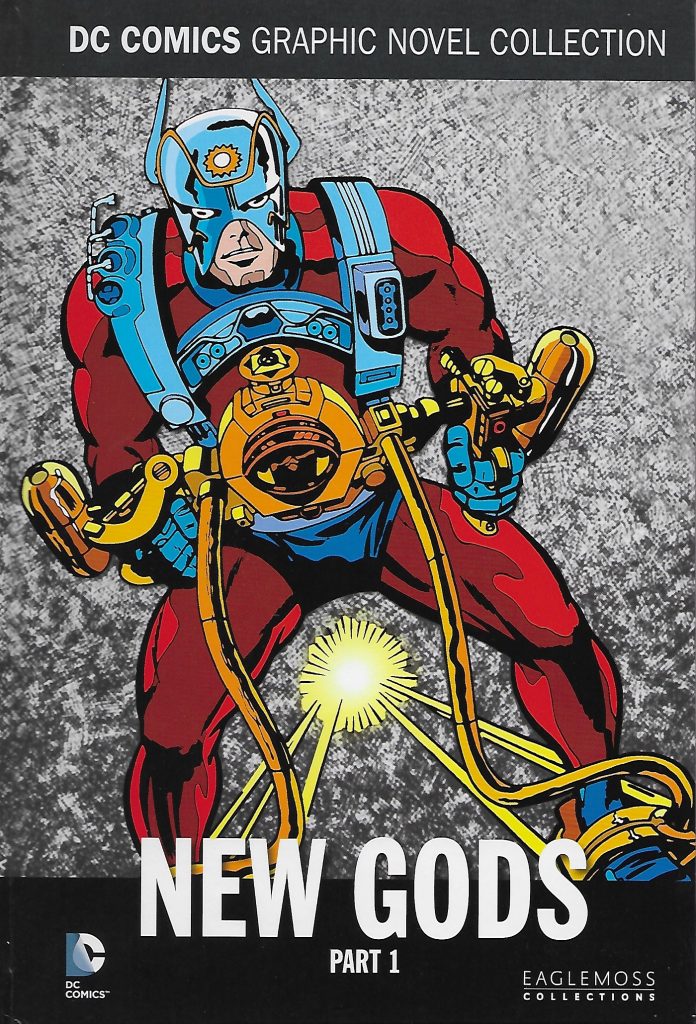 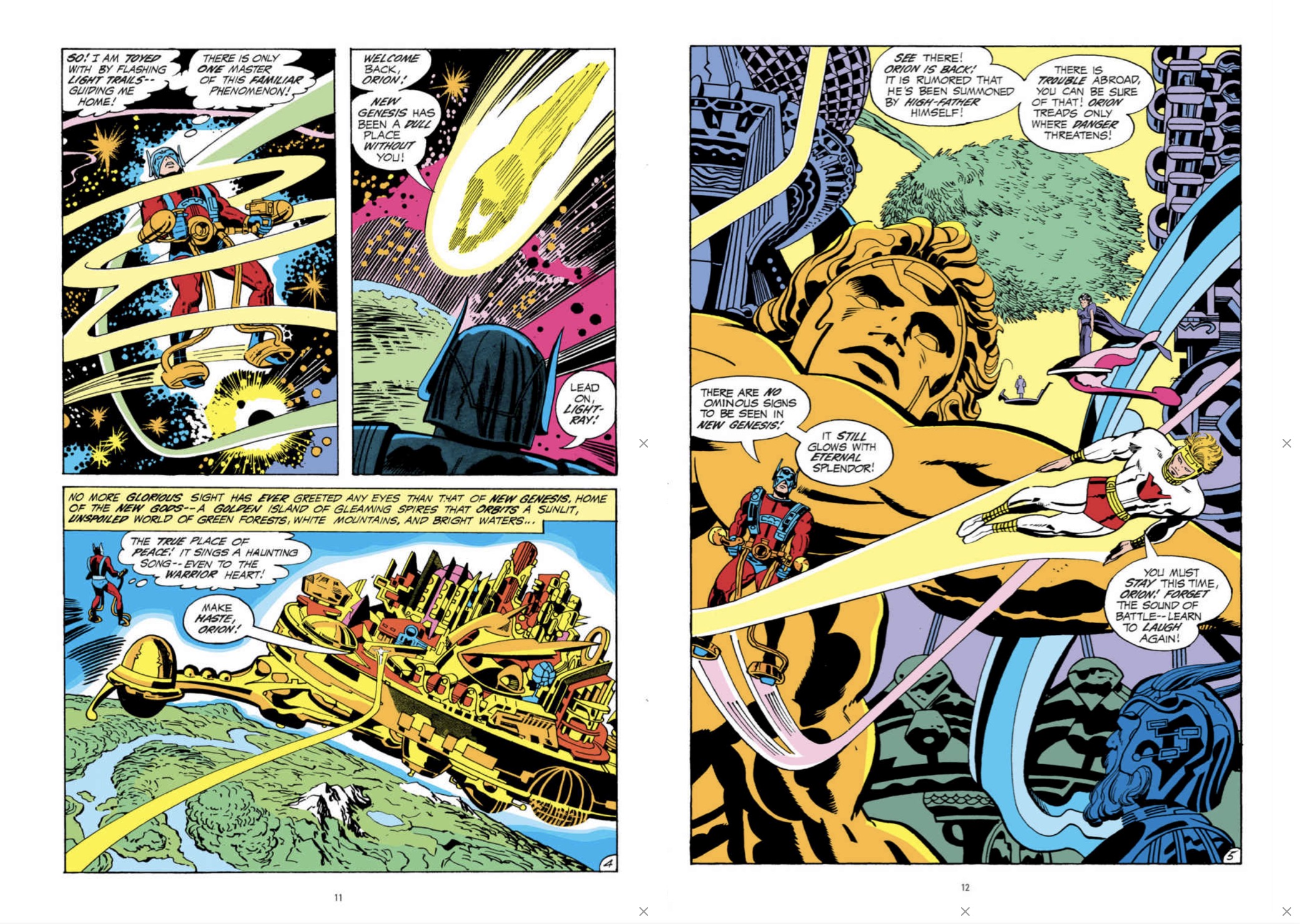 After a decade at Marvel co-creating their ever more lucrative superheroes, Jack Kirby felt under-appreciated. A deal with rivals DC let him start the 1970s with his own set of interlocking Fourth World series’, including the subject of this volume: New Gods.

Reputedly based on a planned revamp of Marvel’s Thor, it’s an epic work, opening with the destruction of a world and its ‘Old Gods’. The New Gods are split between the dualistic extremes of idyllic New Genesis, (pictured, complete with airborne island); and the orb of gaping ‘fire pits’, industrial blight, and prison camps, aptly named Apokolips. As war breaks out between the two worlds, Kirby has Orion (cover image) undertake to protect Earth, with the help of a handful of humans rescued from Apokolips, and visiting allies Lightray and Metron. It’s a riot of ideas, as Kirby introduces a parade of new characters and concepts. In the first episode, alone, we are introduced to The Anti-Life Equation, the Boom Tube transporter, a secret network of tunnels beneath Earth’s great cities, and, er, the Dog Cavalry.

At Marvel, Kirby was increasingly the main creative force on the series’ he drew, with writer/editor Stan Lee adding narration and dialogue to the pencilled pages. Kirby’s contract with DC saw him finally acknowledged as writer/artist and editor of his titles. Few would refute the natural justice of that, but Kirby’s scripting lacks Lee’s deft touch, and sense of irony. While grandiose narration fits the concept here, it becomes fatiguing, and there is some clattering dialogue, with characters repeatedly telling the reader their full name and character attribute. Still, given Kirby’s major strengths, these qualify as ‘allowable weaknesses, and he does improve over the volume.

At his best, Kirby combines celestial and human drama, as in final and strongest episode here ‘The Glory Boat’, where a human and a New God face parallel struggles. Kirby reflects the world he observes, and proves that the liberal sensibilities in his Marvel work, weren’t all down to Lee. Kirby had co-created The Black Panther, and includes black characters here, who’re mostly free of the nascent decade’s blaxploitation clichés. This includes Sergeant Walker, also a disabled veteran of the then current and controversial Vietnam war, who’ll moonlight in the New Gods pantheon.

The art is always strong, and often stunning. Kirby clearly relishes creating the all-new characters, costumes, settings, and paraphernalia of his world. He’s also wonderfully extravagant with space, with each episode typically opening with a prologue splash-page, followed by a double-page spread, and another splash for the title page. The spread of the Promethean Galaxy is a breath-taking career highlight. Finisher Vince Colletta, achieved a singular notoriety as “the inker who ruined Kirby”, but turns in a creditable job (pictured), before Kirby’s inker of choice, Mike Royer, takes over from the fifth of the six episodes here.

Prior to 2018, New Gods was only available in book form as a greyscale paperback, by spending hundreds of dollars on the Fourth World Omnibus set, or the even more extravagant Artist Edition. This and New Gods Part 2 were a welcome addition to the options. The production is good, and the colour (taken from the 1980s ‘prestige’ pamphlet reprints) takes advantage of the greater subtlety the improved production allowed, while remaining true to the flat colouring of the originals.

Extras include a 1957 story about a man discovering (a pre Marvel) Thor’s hammer. It’s a fascinating curio, but with little bearing on New Gods.

This volume and Part 2 are good packages though topped by the complete and better curated, 2018 New Gods paperback 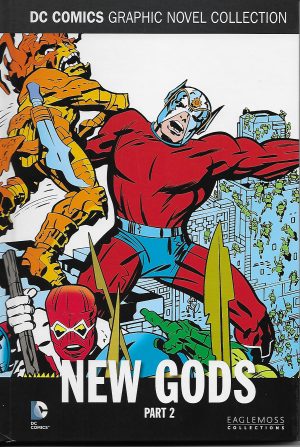