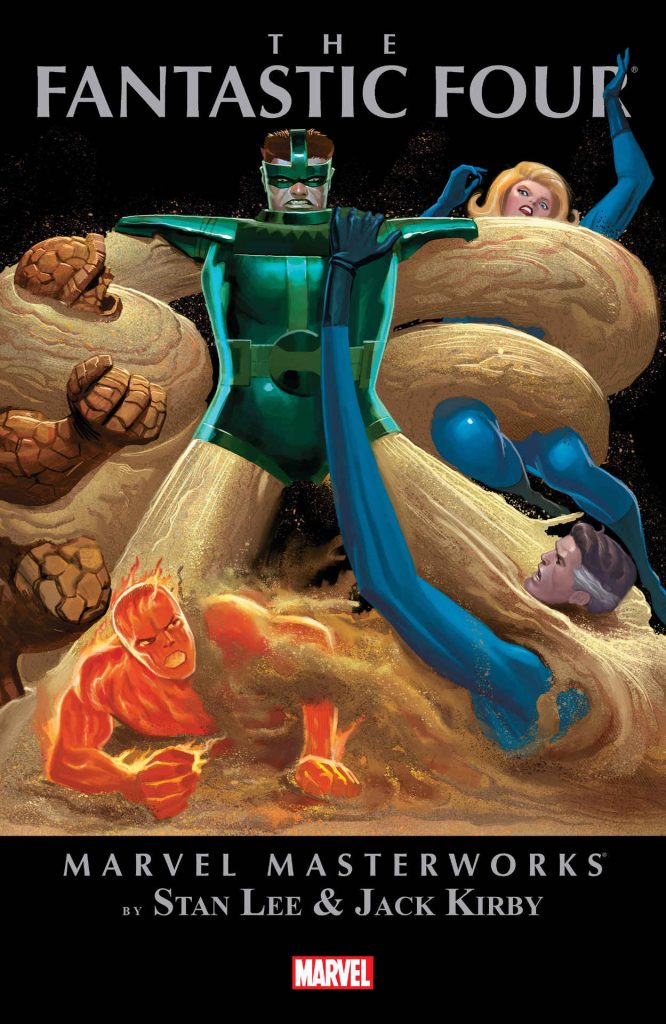 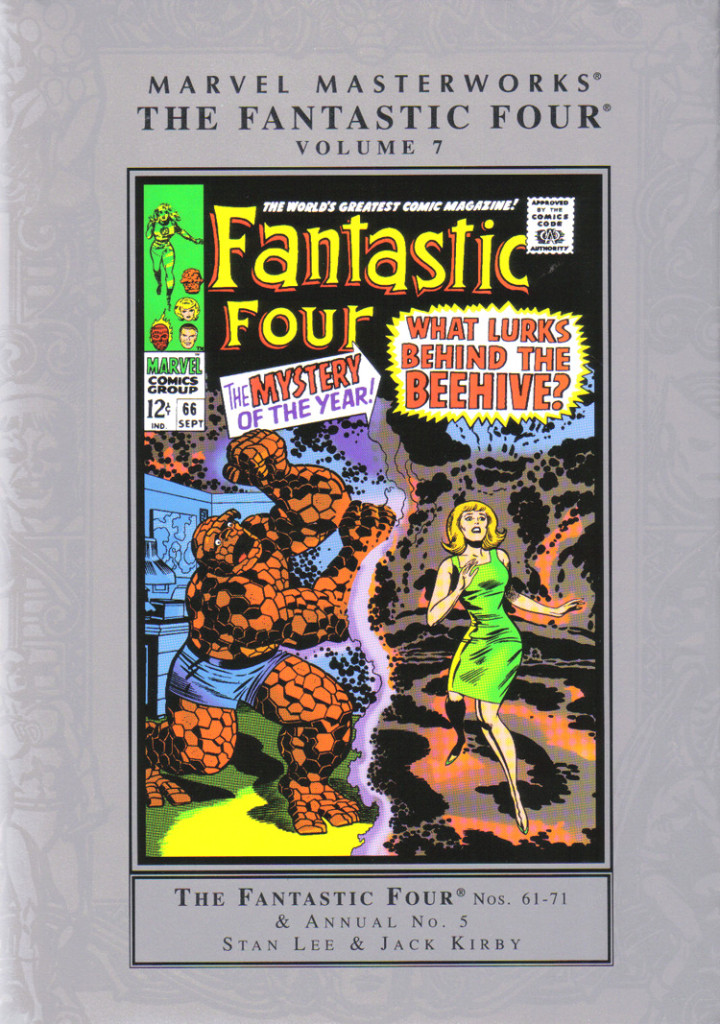 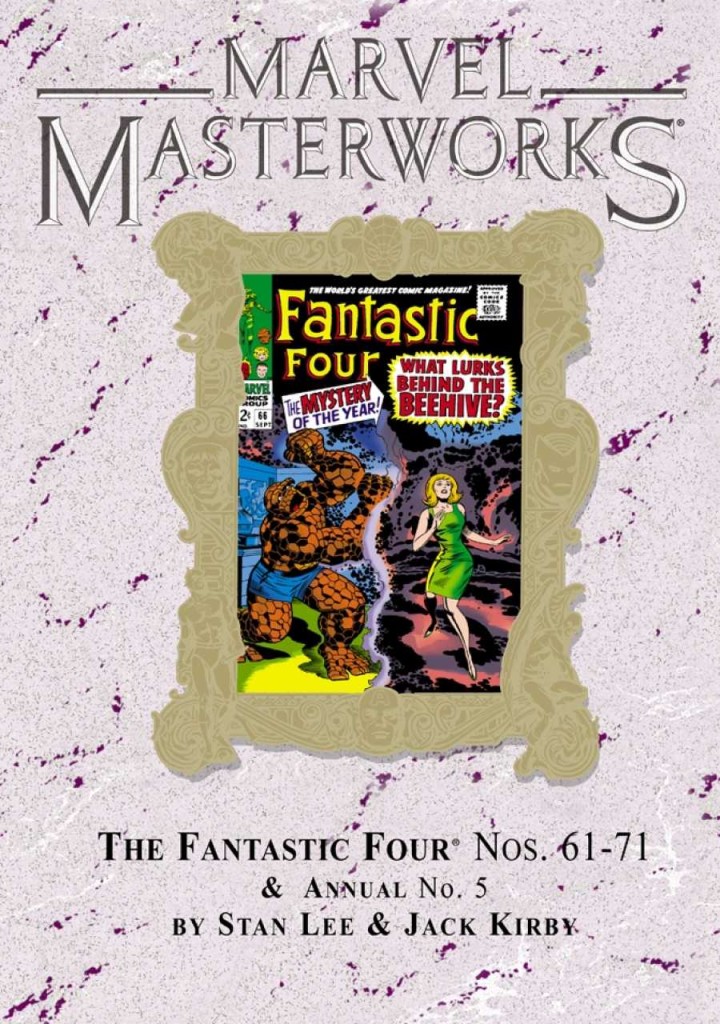 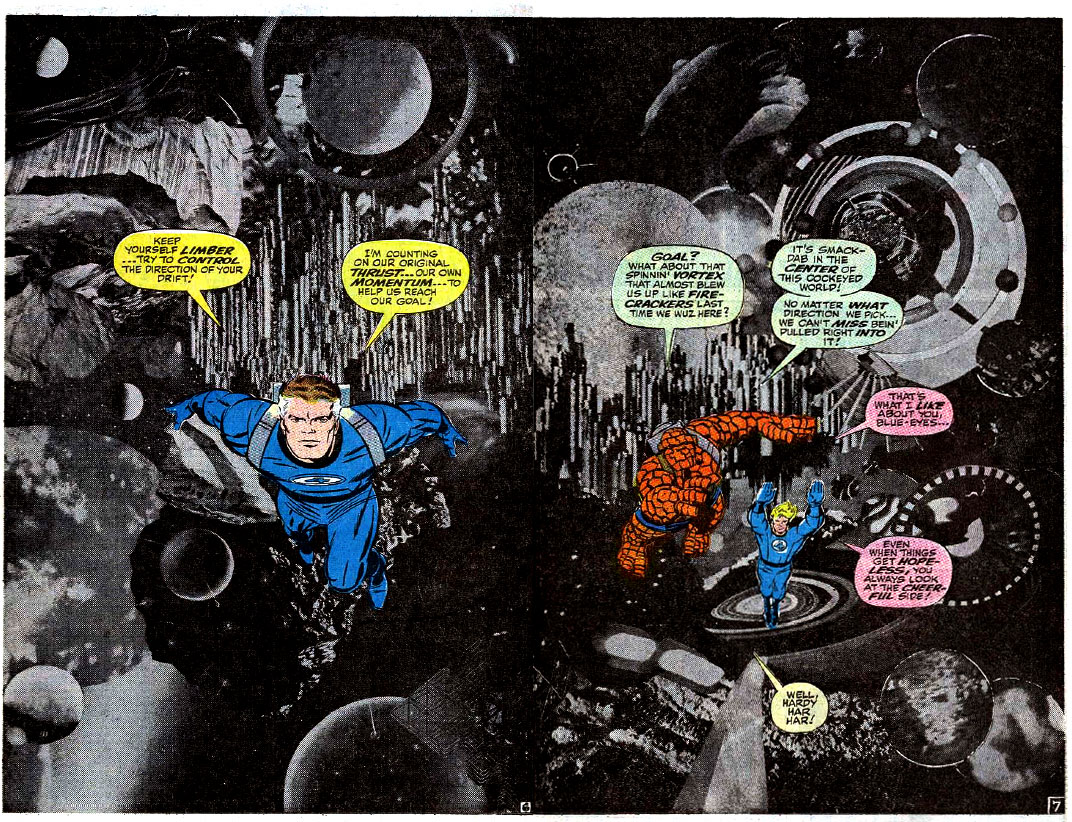 Kirby thrives on the visual opportunities of super-powers. There’s the stylised geometry of the Thing, the dynamic movements of the flying Torch, the infinitely malleable Mister Fantastic, and the Invisible Girl – rendered in dotted lines beautifully arranged over the backgrounds. By this point there are fewer panels per page, sacrificing narrative length for visual immersion. Knowing Kirby rattled through several pages a day just emphasises what an awesome talent he was.

Joe Sinnott’s inking retains Kirby’s distinctive style while applying naturalism and refinement. It perhaps loses some of the naive charm of the earlier issues, but that’s progress. Sinnott became so integral to the look of the series that he was kept on for years after Kirby left. Frank Giacoia’s lush ripping brushstrokes on a Silver Surfer short, are quite stunning.

Kirby has a powerful, deep-rooted, almost mythological, sense of narrative. The more analytical and ironic Lee now just adds text to the drawn pages. Story strands run across issues. A run-of-the mill encounter with Sandman, traps Reed in the dangerous Negative Zone. His team mates seek the Inhumans for their specialist abilities, but as they free Reed, they release Blastaar, a dangerous criminal dumped out of harms way.

The next story revolves around ‘spacemen’ ruling pre-historic earth: an idea that would sell millions of supposedly non-fiction paperbacks in the 1970s. A professor finds proof of his theories in the mothballed earth base of the Kree. Unfortunately, this reactivates ‘The Sentry Sinister’. There’s a great story in the ‘man’ left behind and reawakened, not knowing if his race, his planet, still exists, but it’s glossed over amidst the action. A troubling dream shared by the whole team presages the return of the Kree, in the form of Ronan, a sort of intergalactic Sheriff Officer to exact ‘justice’. The idea of being held to account by a legal system you were unaware of, and which is inherently biased against you is intriguing, but again feels under explored. Judge Dredd would pick that up. More interesting is the build-up, where we see the FF attempting normal lives only to each be plucked away in a puff of smoke. An earlier Annual focussed on the Wedding of Reed and Sue, and this reveals another life-changing development.

The series has always thrived on super-powered supporting characters. Previous volumes introduced philosophical extraterrestrial the Silver Surfer; pioneering African superhero the Black Panther; and the hidden race of variously powered Inhumans. A single story here showcases them all, as Psycho Man has each fighting embodiments of their own unrecognised fears.

The most interesting supporting character is the cover featured Alicia Masters, a blind sculptor with exceptional empathy, and an innocent fearlessness. She brings out the sensitive side of the defensive, sarcastic Thing, and was previously crucial in convincing the Surfer to support and protect humanity. Here she reaches out to the embryonic artificial human, known here simply as Him, and later to become Adam Warlock.

While the other three members revel in celebrity glamour, the Thing tormented, by his monstrous exterior, yearns for an ordinary life with Alicia. Reed’s latest attempt to restore his human form, is compromised by an mystery antagonist, and instead simply magnifies his hostility and resentment to his team mates, in the self-explanatory ‘By Ben Betrayed!’

Earlier books in this series ended mid-storyline, but here an extra issue is included to conclude some matters. Nonetheless, it still finishes with a cliffhanger about the future if the team. These stories also appear in Essential Fantastic Four 4 and Omnibus 3.