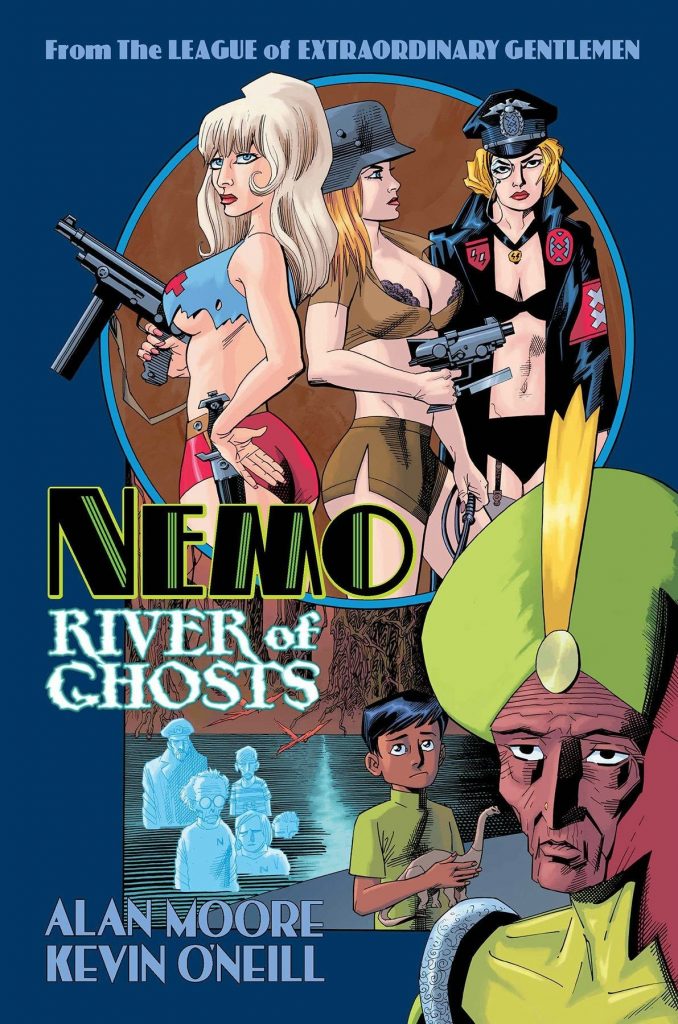 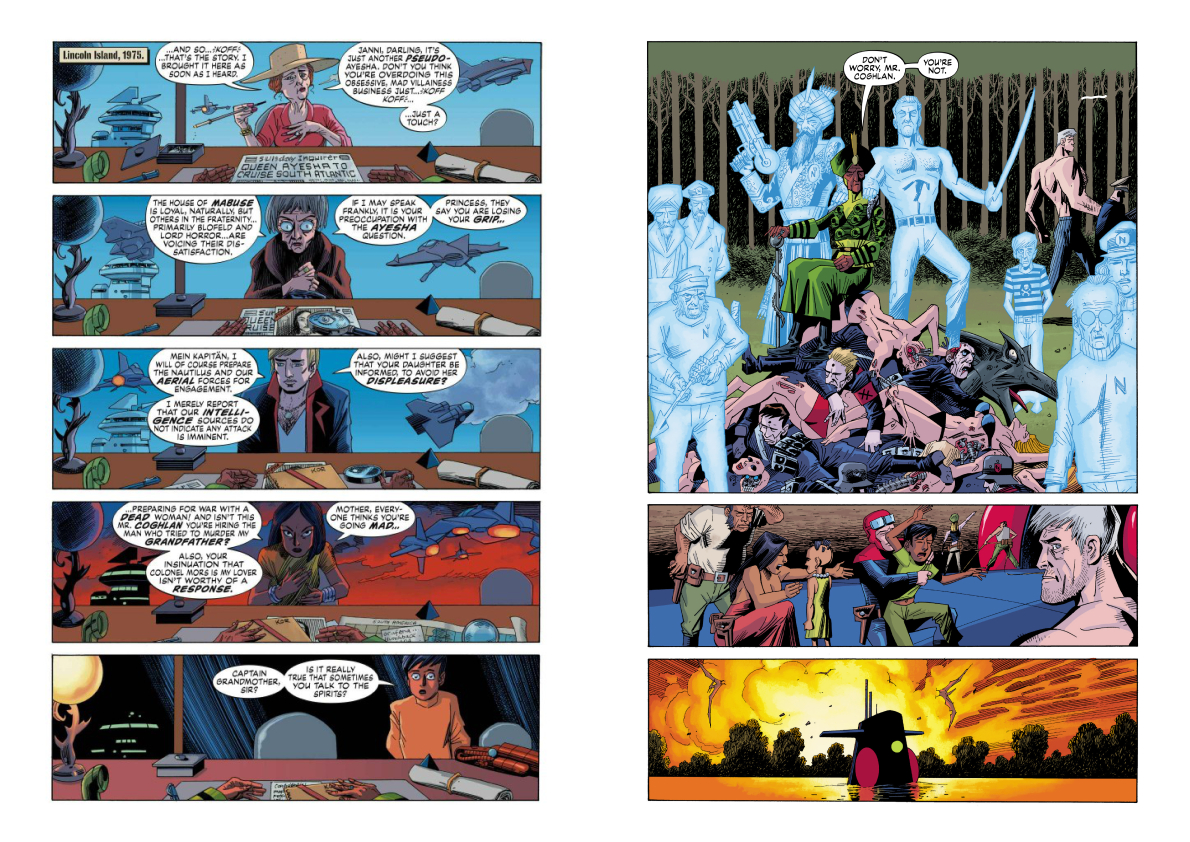 The League of Extraordinary Gentlemen spinoff concludes with River of Ghosts. The crew of the Nautilus submarine has been taken to unexplored times and places in this all-encompassing fictional world: Antarctica in the 1920s, Germany in the 1940s, and now South America in the 1970s.

We join Janni Dakkar, the second Captain Nemo, on her island haven in 1975. She’s elderly, ill, and possibly delusional, the latter perhaps explaining the ‘ghosts’ of lost shipmates (pictured, right): husband Broad Arrow Jack, First Mate, Mr Ishmael, and of course her father. Janni’s also preoccupied with her nemesis of the preceding books, African enchantress Ayesha. The opening page demonstrates Alan Moore’s storytelling skill, neatly introducing the plot, and accumulated cast, as as they each sit across Nemo’s desk (pictured), questioning sightings of Ayesha, and the wisdom of “war with a dead woman”. Nevertheless, Nemo with new bodyguard Hugo Coghlan, stowaway grandson Jack, and the ghosts of her dead, sets off towards the Amazon, explaining the title River of Ghosts.

This quest story neatly reverses the first instalment’s pursuit story, but with a common creative goal of taking the reader to previously unseen places, including The Lost World, and The Black Lagoon. The journey ends in an enclave of World War II escapees, so picking threads from the previous instalment’s alternative history of Germany, and reflecting both fictions and real-life fears of the 1970s. The assault upon that settlement also neatly mirrors the previous instalment’s siege of Berlin.

Moore plunders with purpose, creating a vivid picture not just of a fictional South America, but of the era. Lethal bikini-bots, for example, combine the submissive Stepford Wives, with the period’s ‘anything goes’ permissiveness and a (perhaps unrecognised) fear of emerging feminism. A more serious aspect of the period is the spectre of surviving Nazis at large, multiplied here with the additional threats of emerging robotic and biologic technology at their disposal.

The series’ spectacular plots propel strong human stories, following over the half-century the developing cast of Nemos, Roburs and Ishmaels. Moore is tireless in finding and re-appropriating characters. Janni’s own backstory told in (Century 1910) merged her reaction against the Nemo legacy, with Brecht’s Pirate Jenny, in turn based on real life Jenny Diver. Similarly, Janni’s bodyguard Hugo Coghlan weaves Hugo Hercules, star of the “earliest superhero fiction comic” into the intertextual history, as Celtic demigod Cú Chulainn. Another ingenious twist across sources deftly explains the numerous apparent sightings of Ayesha. The erudition doesn’t detract from the entertainment, though. There are numerous moments of heroism, drama, humour, and tenderness, with all present in a closing scene featuring little Jack Nemo.

Kevin O’Neill refined his art style over decades, and by 2015 was as confident on quiet character moments, as on spectacular seventies-style cinematic set pieces. This is a career peak. Ben Dimagaliw’s colouring, always impressive yet sometimes intrusive, now perfectly complements O’Neill’s art, resulting in pages equal to anything.

Whether read as the conclusion of the Nemo trilogy, or in isolation, whether as entertainment or as a study of the fictions of the 1970s, River of Ghosts is a brilliantly conceived and executed, thoroughly satisfying, graphic novel. The Nemo cast reunite with Mina Murray and the survivors of Century, in final League volume The Tempest. Alternatively all three Nemo volumes are combined in slipcased edition Nemo Trilogy.