Vincent Perriot presents the future, and the future is dinosaurs! Technology exists, used for the likes of experimental weather control, but Jarri herds dinosaurs just as his father had done. That is until the day a faulty device sets off an electrical discharge that destroys his entire herd. It’s when Jarri adopts revenge as a career path.

This isn’t quite the SF thriller that may be suggested from the synopsis, as Perriot is a leisurely storyteller who obviously enjoys drawing wide open vistas, seen from both ground level and the air, and they occupy a good number of pages before the main story kicks in. His style within that is fascinatingly detailed. There’s no-one wearing just jeans and a t-shirt. Everyone has ornately designed clothing, in a world that’s vastly influenced by Jean Giraud in both his artistic identities. Perriot has the talent to pay homage to the busy art of Giraud’s Westerns, but also acknowledges the wildness and absurdism of Moebius. Negalyod may not always make sense, but it’s two hundred pages of great art.

When Jarri reaches the city, imaginatively designed as if constructed piecemeal, he starts at the bottom, falling in with Kam, who can see the future and wants to start a revolution against the privileged living high in the sky. The machinery they use to pump water from within the planet occupies two-thirds of the surface. Perriot pours in as much detail to the technology as he does the landscapes, and these offer more opportunities for visual design.

As far as the art goes, no-one’s short-changed by Negalyod, but in looking back to the French SF comic greats of the 1970s as his primary influence, he’s a little too faithful, not just aiming for the high artistic standards, but also adopting the meandering storytelling style. Five pages to bring down a pterodactyl is around right, but that’s followed by a dozen chasing down a truck, which is thrilling at the start, but too prolonged. In the construction of such sequences Perriot forgets all about the plots he’s already introduced, and he’s also prone to random moments without any logic. One is Jarri finding help when he most needs it from creatures claiming to have studied him his entire life. What a convenient intervention!

There’s a vague ecological message, but so much about Negalyod is vague because the cast behave as puppets, their only purpose to take readers to the next plot bomb. As with everything else, the climax is extended too far, and the actual ending skirts cliché. Anyone picking this up is going to find it difficult to resist the art, but just don’t expect much of a story to accompany it. 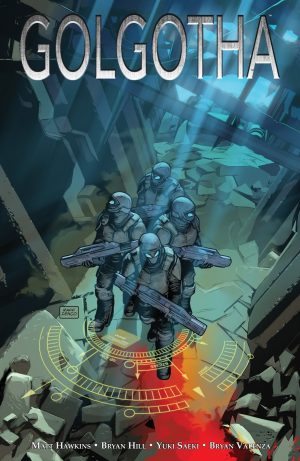