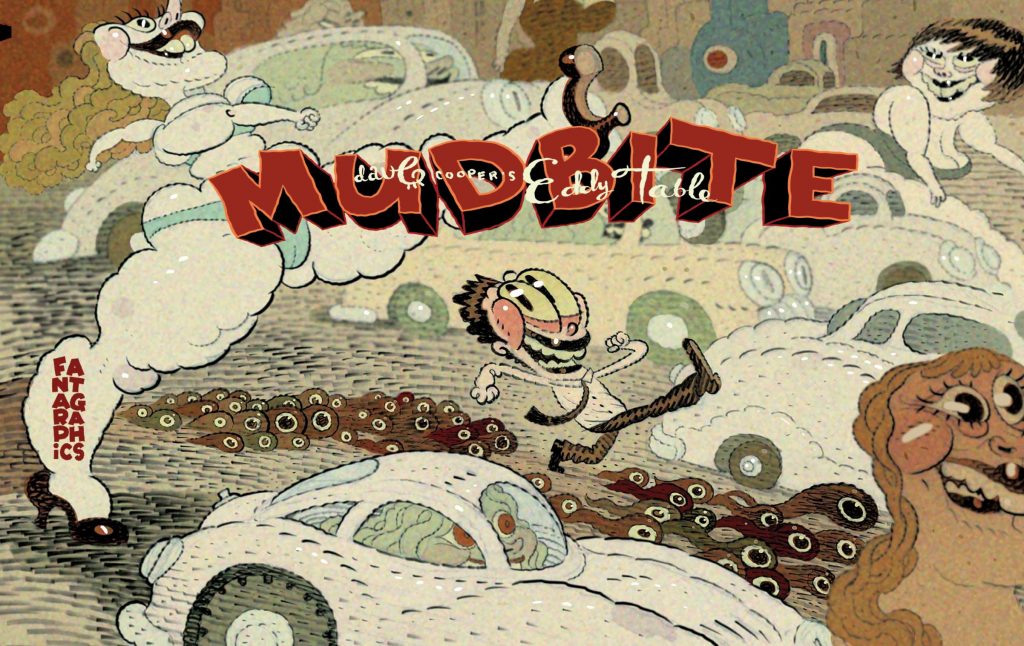 Dave Cooper is a polarising cartoonist. Some look at his pages and note the influence of early 1930s animation on his art and appreciate the surreality. Others can’t see past the lumpy figures and strange circumstances. For fans, Mudbite was the graphic novel they thought they’d never see, his first in fifteen years as Cooper had long since transferred his talents to animation and oil painting.

It features two pieces, ‘Bug Bite’ and ‘Mud River’, both well seasoned with elements common to Cooper’s earlier work. He loves strange life forms that squish, squirm and slime, and sooner or later his cartoon avatar Eddy Table is going to come face to face with them. ‘Bug Bite’ begins with a family trip to New York, and evolves into a journey through a strange underworld loaded with sexual symbolism and ‘Mud River’ does much the same with the family absent. Cooper’s dropping himself squarely into Robert Crumb territory, where his bewildered alter-ego dreams of voluptuous women, completely contrasting his petite wife, and indeed his petite self. These women envelop Eddy, and he luxuriates in their fleshy charms, the lust for them overcoming any qualms about their disgusting aspects. What are we to read into this? Surely Mrs Cooper has questions of her own.

Where Cooper differs from Crumb is that his women aren’t objectified to the same degree, they’re naked and available, but within the same lumpy, style Cooper applies to all his art, rather than lovingly defined. That wider surreal world where eyes literally pop from the head and squads of multi-legged slugs skitter across surfaces is wonderfully rendered, in fully realised disturbing environments conjured up by Cooper from God knows where. Let’s face it, you really don’t want to know where he pulls those nightmares from, just be content there’s distance between reader and reading. In addition to the stories, Cooper ends Mudbite by supplying equally disturbing paintings, expanding on the idea of women as car and vice versa from ‘Mud River’, and perfectly formed character sketches as endpapers, resembling nothing so much as old-fashioned letraset sheets.

Whether taken as Cooper’s confessions or just as straightforward stories, it’s unlikely any Cooper fan is going to be disappointed. If you’d like a sample of his style there’s an Eddy Table animation on You Tube.