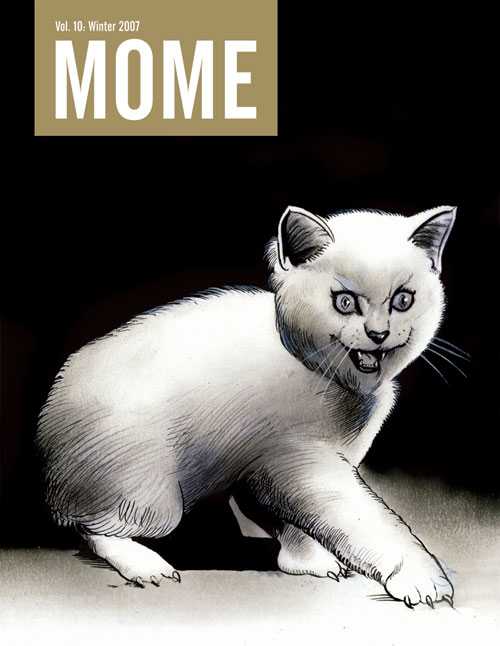 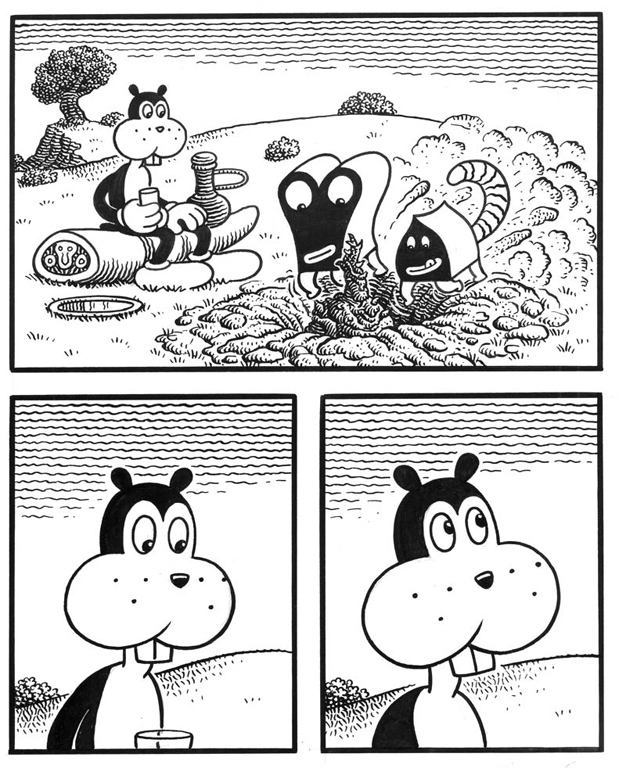 This tenth issue of  their paperback format anthology highlights Fantagraphics’ ongoing commitment to supporting the development of new, or at least little known, creators. Having begun with a focus on autobiographical and slice-of-life stories, this issue shows them branching out.

The most established artist here is perhaps furthest from the previous editorial policy, if firmly within his self-created genre –  Jim Woodring. The concluding twenty-odd pages of his ‘The Lute String’ (from Mome 9) see his unnamed anthropomorphic entities go, courtesy of what looks like Hindu elephant god Ganesh, through a portal from their psychedelic normality to the weirdness of suburban America. His characters are expressive, and his rendering richly toned and textured, in a modern take on the ‘contour hatching’ of old engravings (see sample page). It’s beyond immaculate, almost to the point that readers may bounce off it’s surface.

Brief episodes of long running stories are provided by Paul Hornschemeier, Kurt Wolfgang, and Tim Hensley. The former’s ‘Life with Mr Dangerous’ is in it’s eighth episode, and we still don’t know who the (presumably ironically named) eponymous character is. Its slow paced melancholy, clear linework, and flat colours suggest a debt to Chris Ware, but it continues to engage. This same can’t be said though of Wolfgang’s ‘Nothing Eve’: this is only part five, but it’s outstayed it’s welcome. This may be due to his mannered, over-rendered cartooning. He’s writing about the last day before the world ends, but sure doesn’t draw like it! Tim Hensley’s cryptically absurd ‘Wally Gropius‘, though, works as a single page.

Tom Kaczynski is by now a regular, his contributions are self-contained, yet collected as Beta-Testing the Apocalypse they reveal common themes. His contribution ‘Phase Transition’ starts with a man bemoaning the inadequacy of technology to protect us from our environment, triggering, in a piece of lateral thinking, a search for his more primitive self. ‘Success Comes to Westpoint, IL.’ by John Hankiewicz seems an unintentional companion piece, the environment here triggering more individual memories, left mysterious by his non-literal depictions. It’s a Mome début that merits a return.

Ray Fenwick continues his fascinating work on the boundary of comics, with ‘The Five Oracles of Gossip’. They read like pages from an absurdly brilliant guidebook – conceptual fun, yet still illuminating about the manifestations of this quirk of human behaviour. As with his earlier contributions they’re apparently painted onto the cloth bound covers torn off unmarked hardbacks. Emile Bravo pushes the medium in a different direction, returning with another story with images instead of words in the balloons. As with his piece in Mome 6, his broad comedy masks a satirical edge.

Dash Shaw, will become a regular, and one of the finds of the series. He crams into six small pages an intricate time travel story that’s as humane as it is technical, with people born centuries apart sharing the most ancient human connection. His dismantled palette of primary colours adds coherence to his intercut scenes. Also new to these pages is Jeremy Eaton, who here channels both the style and signature strangeness of Gahan Wilson.

It all adds up to another appealing issue, with a fine balance of regulars and débutants. If Mome‘s focus is shifting, the standard is consistent – well crafted, if now sometimes more mysterious work.