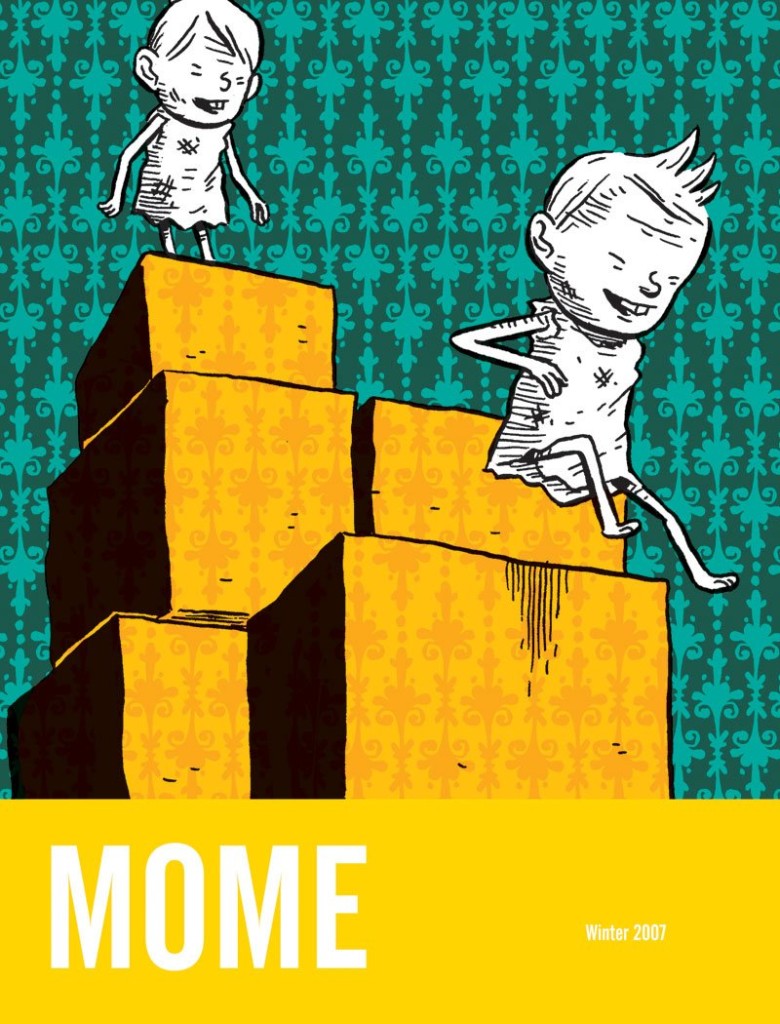 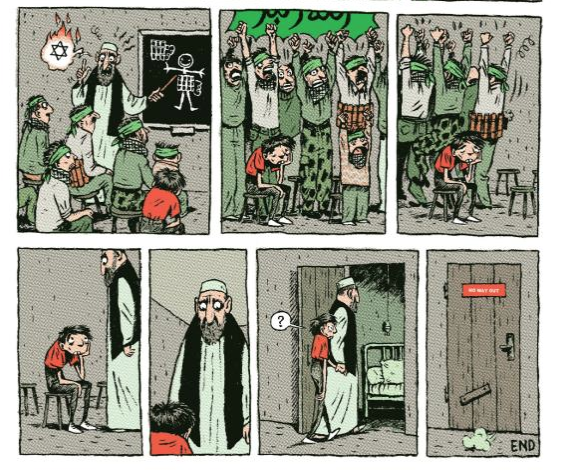 Tim Hensley gives a number of short pieces orbiting his spoilt rich kid Wally Gropius. When he falls for debutante Jillian Banks, it affects his ability to perform with his Monkees styled group: “The whole basis of our sound is sexual frustration. See?”

R. Kikuo Johnson’s contributes some nicely drawn single images that nonetheless hint at narratives, with ‘Love Gazebo’ and ‘First Teen Fancy’ being beautiful pastiches of Romance comics. In the latter a female US soldiers falls for an dashing Arab man: “I occupied his country — he occupied my heart“.

The Middle East is a recurring theme. David Heatley explores liberal American guilt about military intervention in his dream piece ‘Iraq’ and Frenchman Emile Bravo debuts with ‘The Brothers Ben Qutuz in Frustration Land’. There are no words, instead speech and thought balloons are told in symbols and pictures. When the brothers arrive at the military checkpoint, the soldier’s word balloon is a passport. The younger brother responds [picture of pair of jeans with back pocket hanging off]. Soldier [picture of donkey with a question mark], and so on. It’s a well rendered, entertaining read. The humour masks a thoughtful and balanced consideration of the perspectives of those involved.

Anders Nilsen too, mentions the Middle East in his long monologue about the state of the world, and how everything loses certainty, even meaning. There are interludes where he’s using a calculator – perhaps suggesting people’s desire to reduce such complexities to simple numbers, or dollars and cents.

Another French creator debuting here is Lewis Trondheim. Aged 40, at the height of his success, he killed his top character, and announced retirement from his production line. He recorded his thoughts as a diary in comics form, the first part of which is translated here as ‘At Loose Ends’. It appears genuine, with pages dated and drawn in an ‘off the cuff’ straight to pen style. He flies to conventions, and ponders the point of it all: how do you keep the work fresh, and keep enjoying it? He’s thoughtful and self-aware, and recognises, “…these are all questions for the privileged… petty aggravations to torment those of us who’ve succeeded“.

Seeing his lookalike on a train sets off strange chains of thought for Jonathan Bennett. What’s ostensibly a slice of life piece, veers off into the imagination. Elements of the imagined scenes linger when he switches back to the narrative present. It’s nicely done, but the repeat-image-with-variations technique is tiring with more realistic drawings: do we really need to see the detail of the parquet flooring seven times?

A few issues back Bennett’s piece featured pigeons, this time Gabrielle Bell has them. It sometimes feels as if Mome with its regular contributors is something of an echo chamber, with contributors drawing on each other rather than more varied sources of inspiration. Still, it’s a charming story that contrasts her life as a young adult finding her way in the city, with her upbringing in rural California.

Kurt Wolfgang continues ‘Nothing Eve’. The day before the end of the world is a good device for the distant, somewhat cynical Wolfgang characters. Can they fully experience and enjoy what might be the last day of their lives? His drawing style though still feels both too mannered, and over-rendered.

Anthologies are rarely fully satisfying, but Mome is mostly solid material from the regulars, although it still feels that their best work is ahead of them. Mome debutante Emile Bravo is the highlight this issue.