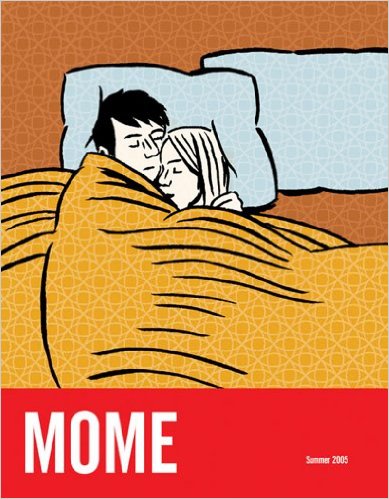 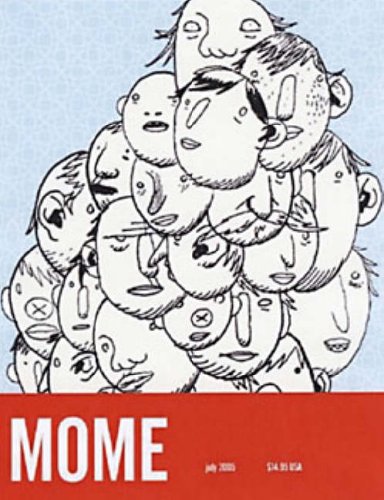 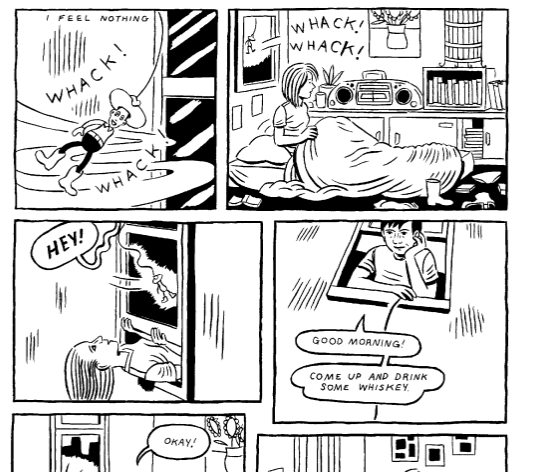 Fantagraphics Books have an admirable commitment to the development of the graphic novel, and a track record of finding and publishing new and varied work. This paperback book anthology was launched in 2004 and focused on (then) relatively unknown creators. In the early issues the stories are mostly autobiographical or slice of life.

Gabrielle Bell’s ‘I Feel Nothing’ opens the book. It immediately catches the attention with a drawing of a cowboy doll with one arm, and the sound effects “Whack! Whack!”. The doll has been lowered from a window to get Gabrielle’s attention, and is an invitation to join the guy in the flat upstairs for a drink. He’s had a fight with her flatmates, explaining the method of contact, and it’s only 8 in the morning. He talks of his formative experiences: boys school, and lack of contact with girls. Now, as an adult, he still doesn’t know how to relate to women, and as in the title, still experiences a lack of feeling. His approach with Gabrielle is inept and uncomfortable, yet this feels an honest and illuminating account of two people sharing a brief moment of partial intimacy.

”Part Time’ is another ostensibly autobiographical piece. We join Jeffrey Brown as he struggles to start a story that is due. It’s an experience many creative people will recognise: the agony of a blank sheet of paper. This could be painfully navel-gazing, but he pulls it off, perhaps due to his self-awareness, and storytelling skills. His art is low-fi, looking like he just draws each panel direct in marker, and he doesn’t worry about the details of anatomy, yet he has a fine grasp of body language, posture, and timing: it’s well ‘acted’. In fact it’s like a short play. There’s no thought balloons or captions, so everything is told in conversations and the visuals. Given that almost nothing happens, this is an achievement.

John Pham and Paul Hornschemeier start continuing stories. In the latter’s ‘Life with Mr Dangerous’, we observe a youngish single woman on her journey and arrival home. She has some phone calls. It seems, so far, another slice of life story. It’s partly told from her point of view: the captions seem to be her internal monologue – there’s no explanation of what is happening, for example who is on the other end of each call. Yet when she’s on the phone we only hear her side of the conversation, as if we the reader were in the room with her, but suddenly not in her head. In itself it’s a fine device – it could become banal to hear the whole conversation, yet it’s inconsistent – we were in her head and now we’re not? That said, both text and art are well constructed. It looks observed from unglamorous life (Hornschemeier may have used models) and is inked in a plain brush style and coloured with a palette of soft, mainly autumnal colours.

Sophie Crumb gives some slices of a perhaps more interesting life of youthful partying and protest. Being the daughter of accomplished cartoonists Robert and Aline (Kominsky) Crumb may be both a blessing and a burden. Her work is similar in style and content to that of her parents, but at this early stage in her career, lacking their authenticity and brilliance.

$15 dollars is a relatively expensive gamble for an anthology. While there are no earth-stopping discoveries so far, there’s enough promise as to how stories and creators will develop. 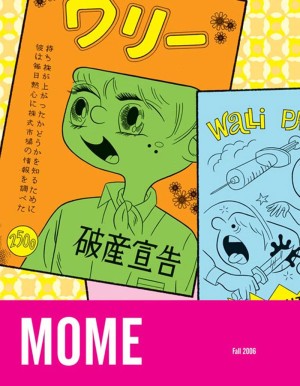