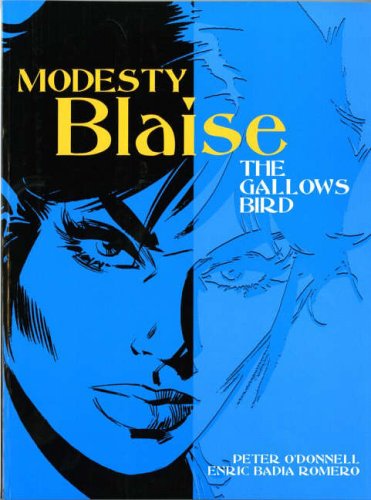 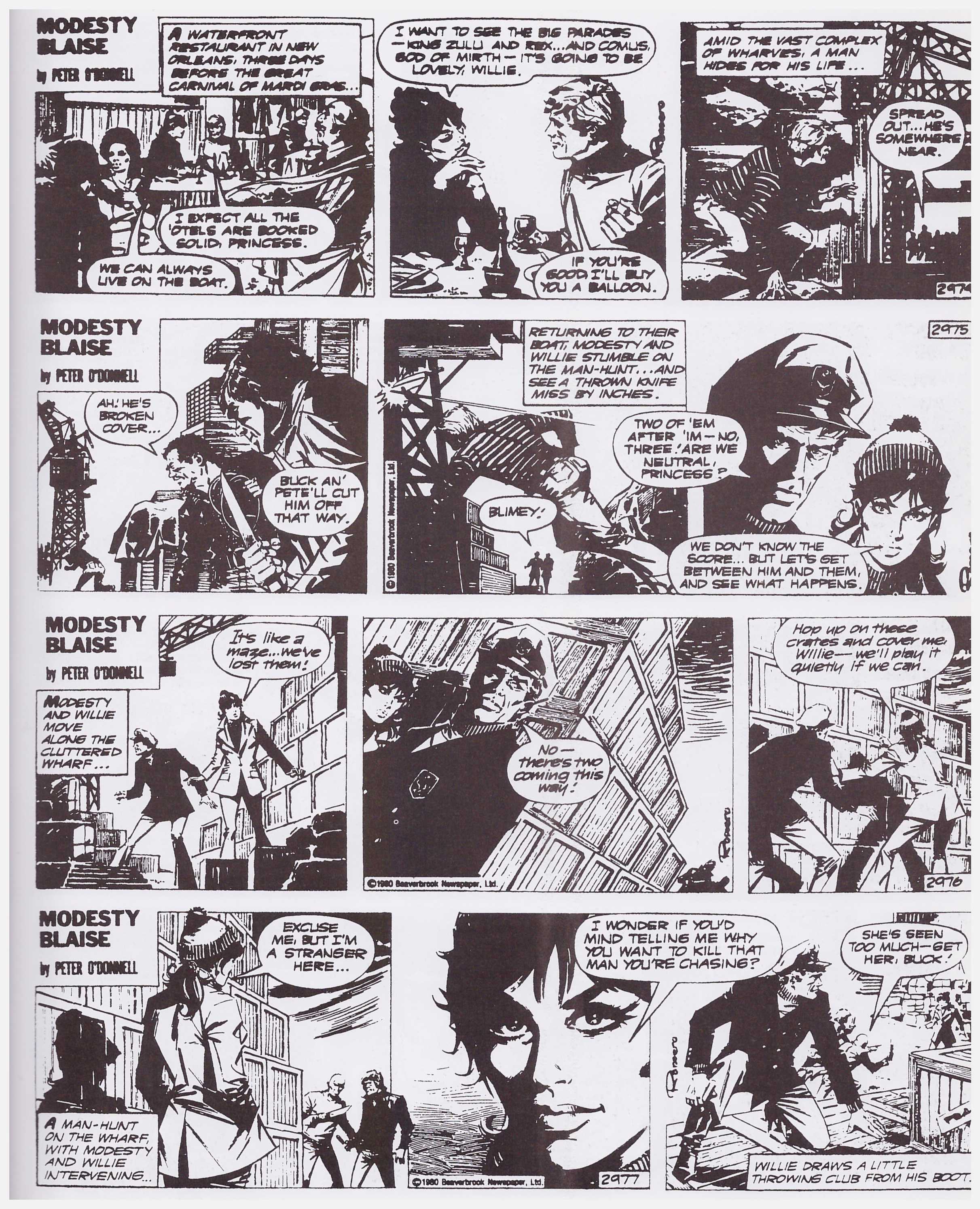 The four Modesty Blaise strips reprinted in this collection span the strip from 1972 to 1974, with the villain of the opener, ‘The Bluebird Affair’, as calculatingly callous as any Peter O’Donnell introduced. Baron Rath is a serial murderer of wives, each time inheriting their fortune. The title originates with a French legend of a similar character, as O’Donnell explains in his introduction, mentioning ‘Bluebird’ as a familiar term to his generation, yet largely unknown now. It’s rather sad that the same comment might now be applied to Modesty Blaise.

For a strip known for featuring glamorous women, Enric Badia Romero rose to the task of creating a pair of sisters whose inner ugliness was mirrored by their appearance. He doesn’t take the lazy option either. Both look gruesome, but he’s differentiated them. Elsewhere, though, it was decided his women in negligees were too racy for a syndicated newspaper strip and an introductory article displays the censorship involved. In some cases the women were just removed from the panel altogether with the area they occupied being filled with black ink, but one full panel illustration was replaced by a black box with a word balloon! There are some interesting double standards in play, as in the collection’s final strip it’s apparently okay to show naked natives of Papua.

Bluebird’s most interesting character proves to be French Intelligence Chief Réné Vaubois. O’Donnell characterises him much in the stiff upper lip manner of British equivalents, but also conveys the concern of a powerful man unable to act in desperate circumstances. O’Donnell’s sense of whimsy emerges in the revelation that Willie Garvin owns the majority share in a circus in addition to his pub. Just as well, since circus tricks are required in a later strip.

Titan Books preface the remaining reprints by noting they’ve been reproduced from the best possible source materials. The reproduction is in some cases shoddy. Yet as the alternatives are either an incomplete run of strips or paying a lot more than £11.99 for the book if restoration were to occur, Titan have made the practical choice. The sample art is from the title strip enabling the purchaser to do so also.

As noted in the introduction, the title strip’s threat to drown the city of New Orleans was horribly prophetic, but despite a strong introduction ‘The Gallows Bird’ isn’t the best. The villains are overly caricatured, the use of Mardi Gras costumes extends thoughts of the Batman TV show, several matters are too coincidental, and unusually, there’s a predictable conclusion.

‘The Wicked Gnomes’ tips over into comedy territory, with more costumes, Laurel and Hardy substitutes, and confusion all round. That’s enveloped, though, in a clever plot, genuine peril and some nice character touches. One strip is missing on the final page, bizarrely replaced by an earlier one rather than just omitted, but it doesn’t impact greatly on what’s a fun story. ‘The Iron God’ is even better. It mixes science and superstition, introduces a cunning enemy in a deadly situation, and is surely one of the few stories O’Donnell wrote where it’s not Modesty or Willie that saves the day.

The only continuity is the odd recurring character, so Modesty Blaise strip reprints can be read in any order, but those wanting to follow the strip as originally printed are directed to Cry Wolf next.