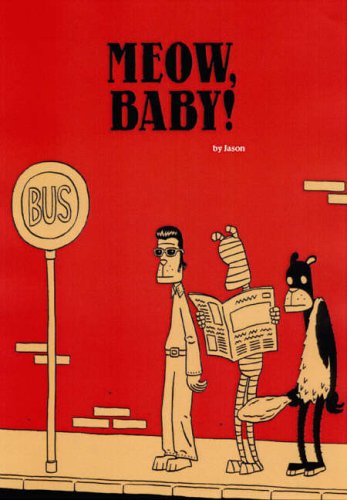 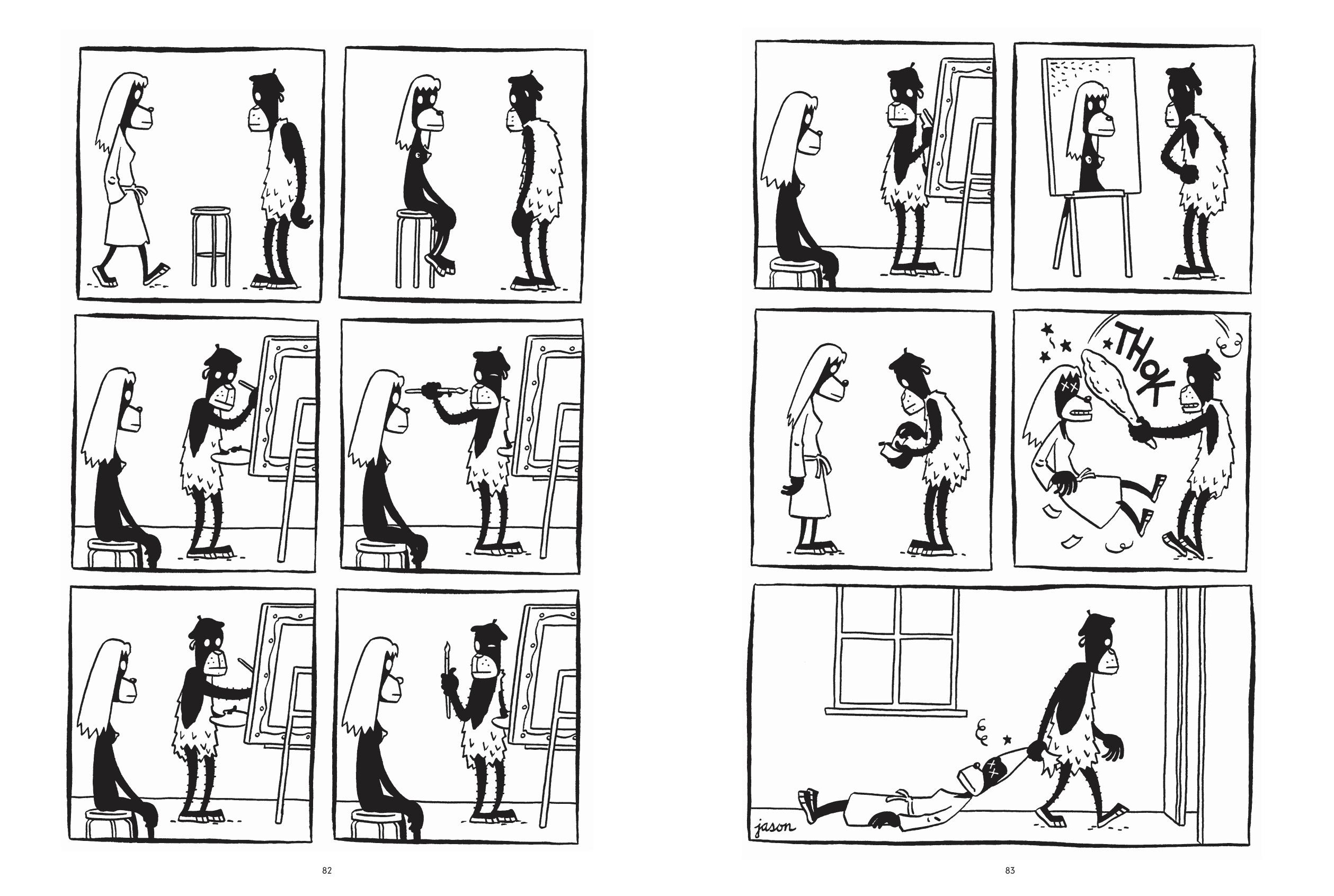 Meow Baby! finds Jason in especially whimsical mode. Each successive release sees him switch genre, like a graphic novel Coen brother, and here he toys with the conventions of animated slapstick, in a series of stories that become progressively shorter as the book continues. Jason starts with a mummy, then adds a killer, a vampire, a spaceman, a skeleton, an angel, a caveman… all set loose in the opening story. These are variations on Jason’s customary bird, cat and dog people and over forty pages he reduces them all to banal in a series of sequences in which they interact or are united by connecting events. The vampire’s night out ends in rejection and an early return to the TV, the mummy is chased by Jason’s version of Thomson and Thompson from Tintin, and the spaceman is forced to wait for a bus.

This introduction is followed by a series of two page gags featuring the previously introduced cast in the basic set-up and resolution format, all of them playing to type. The caveman, for instance, can’t overcome his compulsion to club women and drag them off. More characters are introduced, all of them also archetypes, the zombie, Elvis, a gangster… and again they interact. While the cartooning is excellent, the jokes aren’t. They fall flat, fail to surprise or peter out, only very rarely raising a smile. An exception is Elvis being returned to the grave, but more representative is the gag providing the sample spread, which takes too long to work to a predictable Mad style punchline. A brief selection toward the end of this section feature dialogue, but for the most part the strips are wordless, Jason’s cartooning providing the emotional impact.

The Mummy’s Secret’ runs to eighteen pages of surrealistic whimsy, connecting many of the previous characters in absurdist fashion, but leads nowhere, and again disappoints. There is a reason for this as much of Meow Baby! Is culled from Jason’s earliest work, some as early as the 1990s, and while the art is fully formed, he’d not quite developed the intricate sense of pacing and fine narrative techniques associated with his later work. Think of this as Jason’s development chronology.

With much of the book not living up to Jason’s usually high standards, there possibly won’t be any anticipation for a fourteen page closing section of three panel gags. These, however, form Meow Baby!’s best content. They’re excellently composed, raising a smile at the minimum, and some much more. They play with classic gag standbys, the sign hung out, the prank call, yet subvert expectation time and again, with zombie extensively and imaginatively used. Having begun to wonder when Jason found his mojo it’s comforting to know he pulls it all together in the end, but sadly it’s not enough to rank the book more than average overall.

Meow Baby is now out of print, although used copies are easily available, but also forms half the content of the hardcover Jason compilation Almost Silent.