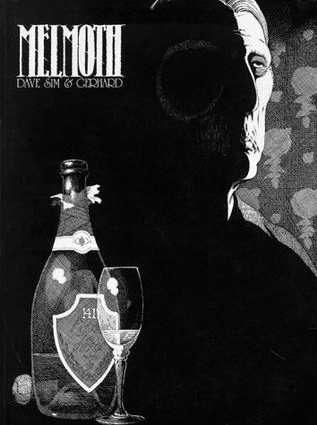 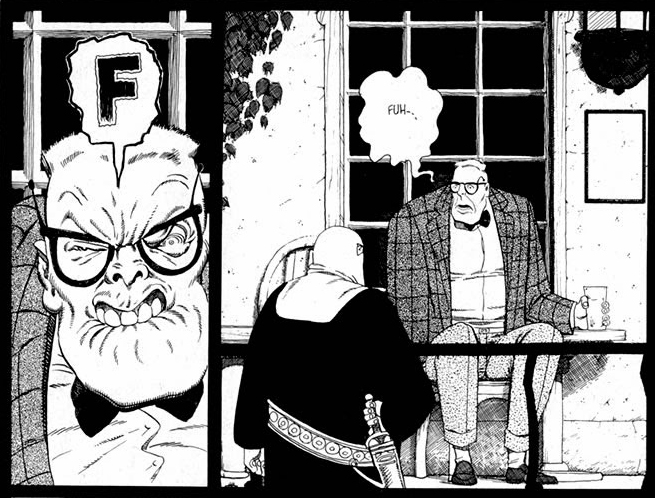 Sim, and the ‘Cerebus effect’ (buying books rather than each issue of a comic) contributed immensely in popularising the graphic novel format, and up to this point Cerebus ‘phonebooks’ (with the exception of the first, a collection of short stories) had been large novels: High Society and Jaka’s Story are around 500 pages each, and Church and State ran to 1,200 pages. This explains why Sim, in his introduction, calls the 248 page Melmoth a short story.

The book opens, after some beautiful establishing shots by Gerhard, with Artemis Strong (AKA the Roach) sitting outside a bar. The first words he speaks are, “Fucking cunts!” Artemis disappears after the prologue, and his brief appearance, little more than a cameo, would be repeated by other characters from earlier books. These don’t intrude upon the main story, which depicts the decline and eventual death of Oscar Wilde, through the eyes, and letters, of his close friends. Although it may not even be the same Oscar that we met in Jaka’s Story, the previous book. In that novel there were strong hints that there were two Oscars, and the deliberate ambiguity is continued here.

Cerebus, who doesn’t even appear until page 52, spends most of the book in a near-catatonic state, sitting outside the same tavern where we first saw the Roach. When he does finally explode into violent action, in the epilogue, it almost takes one’s breath away, and it’s as if the last 230 pages have existed merely to lull the reader into a false sense of security.

This is a quick read compared to all other Cerebus books, and one can see why Sim referred to it as a short story. However, reading the same story in comic form over two years made for a very different experience. Two years of waiting for Cerebus to just do something – other than eat the occasional raw potato – really made the blood-spattered epilogue all the more dramatic, and, frankly, a bit of a surprise after what had gone before.

Sim wrote, drew and lettered the entire book, and has deservedly won awards for his lettering. He was more than ably assisted by Gerhard. Much more than just a background artist, Gerhard’s buildings are truly works of art, and he made certain everything physical in Estarcion fitted together beautifully. His invaluable contribution helped make Cerebus one of the most attractive and professional independent titles on the market.

The writing is very good, though Sim has a tendency to wordiness and you wouldn’t necessarily want to start reading Cerebus with this book (High Society is a much better place to start). The tale of the death of a gay Irish writer may not be presumed to everyone’s taste, and it wasn’t, with the title shedding readers at this point. Though that was nothing compared to the shit-storm that Sim would cause with his next book, Mothers and Daughters, (split over four volumes: Flight; Women; Reads and Minds), comparable in size to Church and State, and concerning itself once more with Cerebus, after two books in which he’s little more than a supporting character. This makes Melmoth an interesting, if slightly odd, diversion from the main story. But it’s mature and polished, while pushing hard at the boundaries of what’s normal for a comic, and that’s something that should always be applauded.