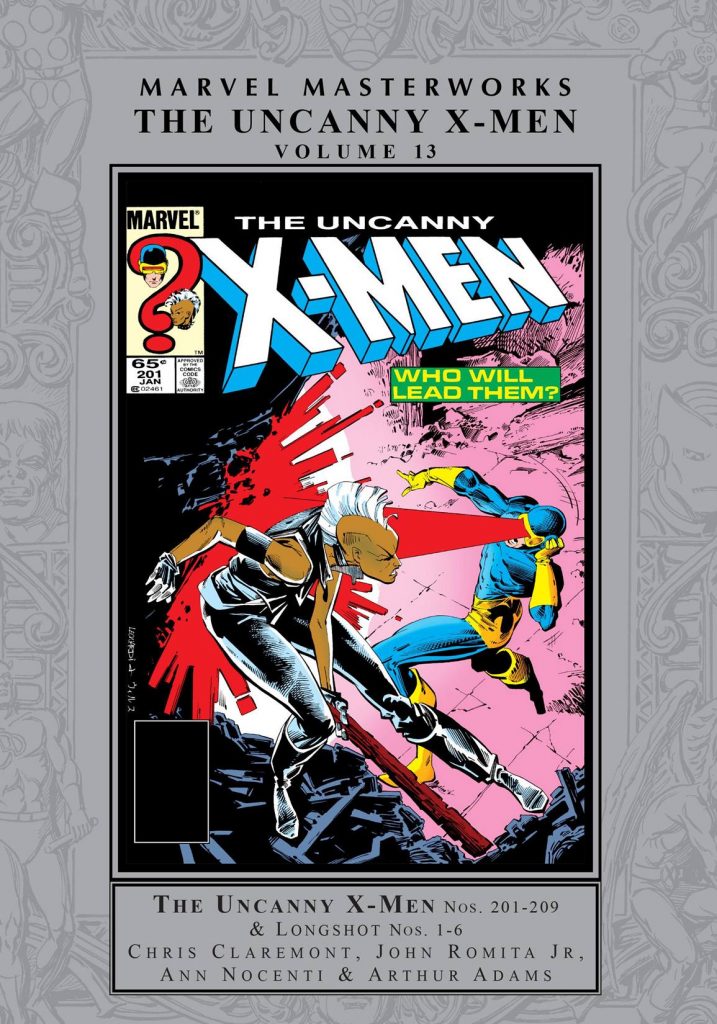 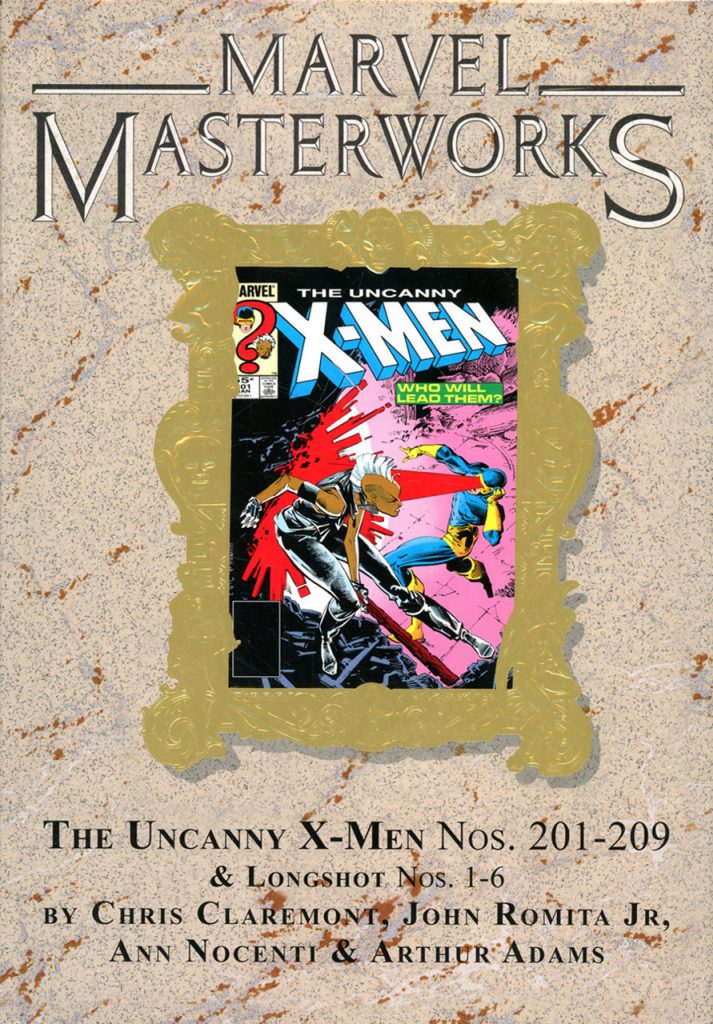 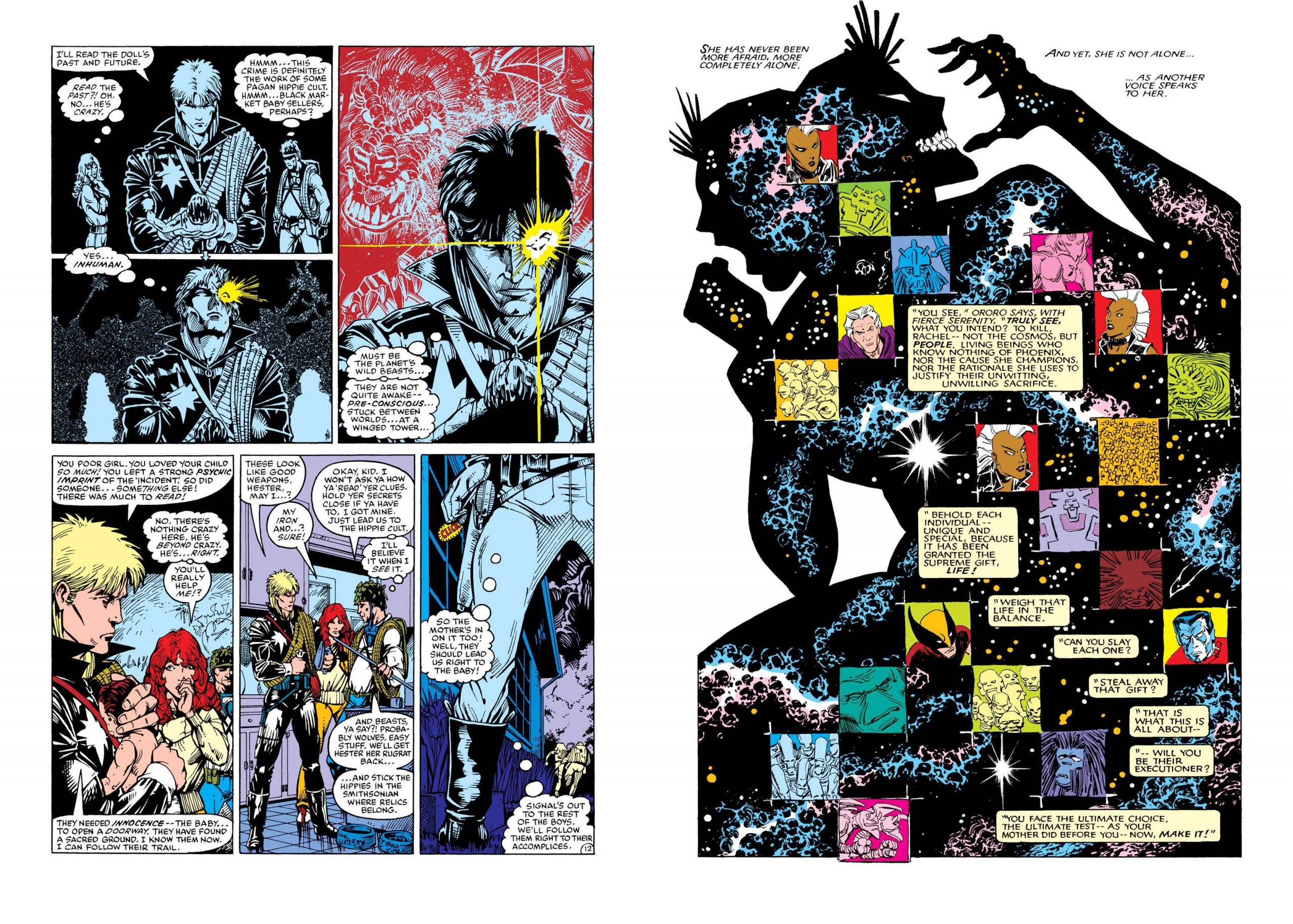 This selection is far more straightforward than either of the previous two volumes, reprinting nine X-Men issues from 1986, plus the entire six chapter story introducing Longshot. That’s not got any great relevance to this content, but Longshot joins the X-Men during the material presented in Masterworks Volume 14.

Art Adams drew the X-Men spectacularly well in stories reprinted in Masterworks 12, but he first came to wider attention with Longshot, Ann Nocenti’s story of an innocent with a heroic character arriving on Earth and gradually revealed to have luck always working in his favour. With the mullet hairdo, his design screams 1980s, and although distinctively detailed, with hindsight the attention drawn by the opening chapters of Adams art speaks more to general standards of the time than quality on his part. By the final chapters, though, he’d weeded out most faults, and developed an attractive style while holding onto the intense detail. However, Nocenti’s script is barely readable. There’s no ear for dialogue, and while she’s attempting something different and filtering in some interesting ideas (largely in passing) it’s extremely difficult to work through the story as written.

Before then there are nine X-Men chapters written by Chris Claremont. In his introduction he refers to them as the story of Rachel Summers, which isn’t entirely the case, as there’s a lot more going on, but her moments of emotional drama have a greater resonance than those of other team members. She’s from a future where her father is Scott Summers/Cyclops, although he doesn’t know that, and in the present day he and Madelyne Pryor have just become parents to a son. It prompts issues, like charging off to challenge the Beyonder. The Beyonder’s infinite power is then used as a means for Nightcrawler to question his faith,

Artistically this is a strong volume. Adams’ growth over six chapters can be seen on the pages, Romita Jr has settled into a functional, but not always spectacular style, yet here he surprises several times, the sample page among them. Barry Windsor-Smith’s Wolverine solo is breathtaking and would lead into his Weapon X story, Rick Leonardi is an exceptionally under-rated talent (as Claremont’s introduction mentions) and June Brigman has exactly the light touch for what the Nightcrawler story becomes.

In terms of the ideas introduced, Claremont’s really on fire. The way Cyclops and Storm decide which of them will lead the X-Men is novel, as is the idea of the Brotherhood of Evil Mutants having government sanction, and the use of the Beyonder, although Magneto is underused considering the way the last volume set things up. However, what at the time was considered scintillating characterisation hasn’t aged well. It’s too often too melodramatic, and can drift way off course when the editor’s not paying attention. Wolverine kills someone and justifies it by claiming he was preventing an unjustified murder. What? Thankfully, the questionable ethics are washed over by a genuinely thrilling and unpredictable final X-Men chapter when Nimrod comes calling again, and ends with a cliffhanger leading into Uncanny X-Men Masterworks 14.

There’s plenty to enjoy here despite things being of theiur time, but six incomprehensible chapters of Longshot drag.