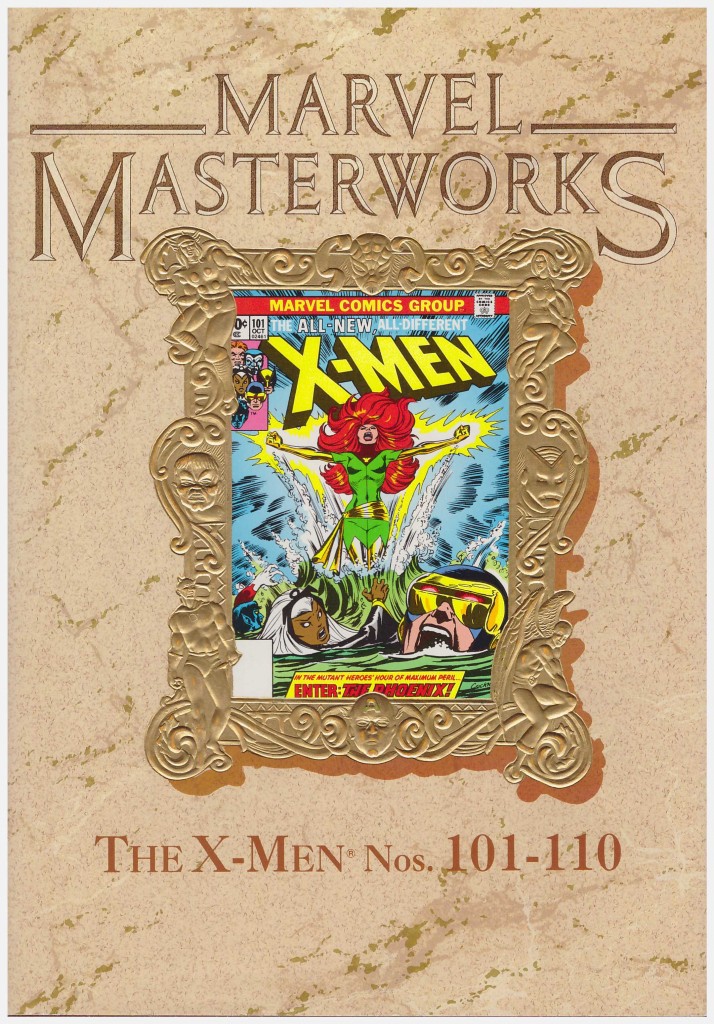 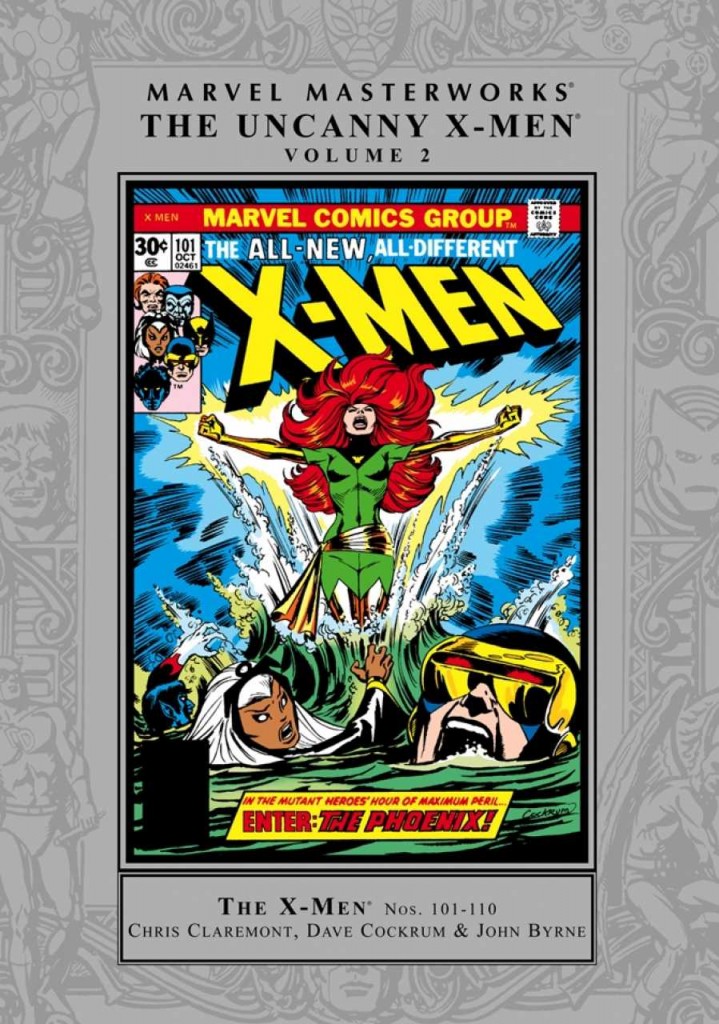 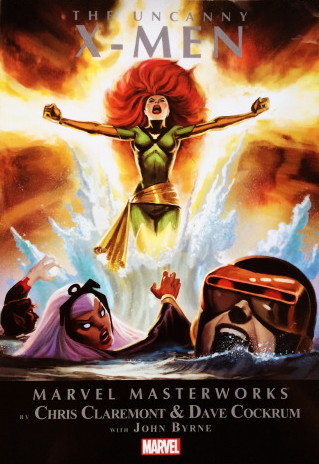 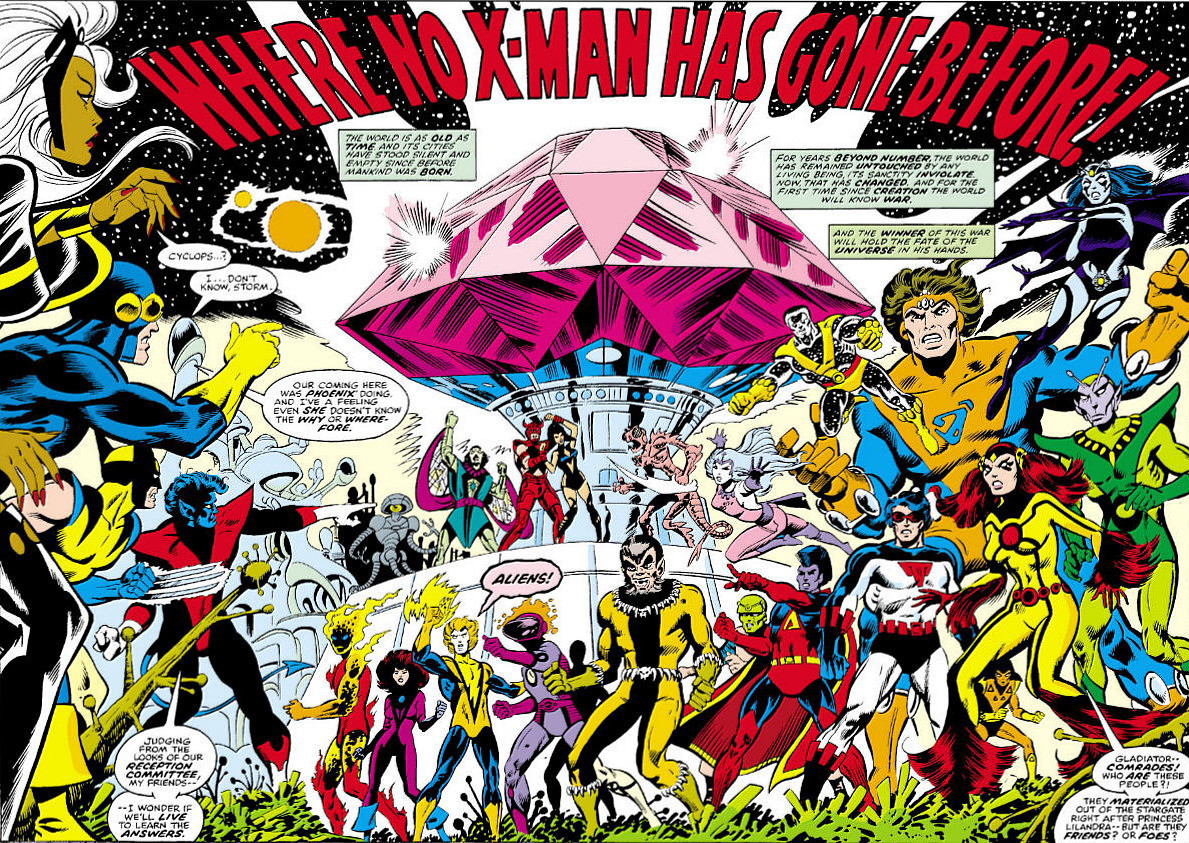 This second high-end reprinting of the revived X-Men’s late 1970s adventures is one of artistic compromise. After two years Dave Cockrum resigned from the series he co-created and helped popularise to the point where monthly publication was finally considered viable. The trouble for Cockrum was that he was having difficulties pencilling the comic every two months. His final half-dozen issues from this stint are reproduced here, thankfully more sympathetically coloured than in the previous volume, but no less than four inkers embellish Cockrum’s expressive pencils, the best of them Sam Grainger. The reason deadlines might be problematical is apparent from his final chapter (which followed a fill-in). He first introduces sixteen new characters forming the Shi’ar Imperial Guard, in reality simulacrums of DC’s Legion of Super-Heroes, whose adventures he once illustrated. That’s followed by a further five new characters as the Starjammers appear for a decisive intervention.

Before that Cockrum and writer Chris Claremont have fun developing their relatively new cast, with particular attention paid to Storm and Nightcrawler, and returning villains from the X-Men’s previous incarnation. Juggernaut’s always rather odd alliance with Banshee’s cousin, Black Tom Cassidy is introduced amid a nicely drawn, but possibly ill-advised story of leprechauns instrumental in saving the day. Over the years Claremont would tinker considerably with Magneto, transforming him from mutant terrorist into the complex multi-faceted character familiar today. It’s odd, then, to see his first encounter with the new X-Men being as a villain for hire. There’s also time for a brief Star Trek homage and a battle with Firelord as story hints from the previous volume crystallise into a conflict over the leadership of a galactic empire.

While most of the material still holds up, this exemplified Claremont’s ambition for the X-Men. It began distancing them from their previous limiting status as an allegory for racism, mutants hunted and feared, to superheroes capable in any environment. A key element, introduced in this volume’s opening pages, concludes the cliffhanger from volume one. The transformation and power upgrade applied to one team member would spin into this era’s unforgettable sequence a few volumes down the line.

When a new artist was required, experience teaming with Claremont on Iron Fist proved John Byrne was a good fit. He was quicker, able to maintain quality and a monthly schedule, and he’s now more fondly remembered. Over time he’d also influence plots, but on the two chapters he illustrates here it’s just his graphic realism and dynamic layouts. Byrne’s second story introduces the character confusingly known as both Guardian and Vindicator, but here as Weapon Alpha. In the next volume this coalesces into the introduction of Canadian super team Alpha Flight.

The material without Cockrum or Byrne is decidedly sub-par. To be fair, Bill Mantlo and Bob Brown were handed the task of picking up from the previous chapter’s shock ending, then delivering a story that left everyone where they were. Cockrum supplied a splash page, but it’s no surprise that inspiration is low. This also applies to Tony DeZuniga, but the Claremont strip he illustrates is patently rapidly constructed filler with little other than action scenes.

As with the first volume, this is a patchy collection. When the creators are firing on all cylinders it’s exciting, well-drawn superhero action, but a few minor teething problems remain. That disappears from the next collection. The entire content is also available in two decent value products. In colour it can be found in the Uncanny X-Men Omnibus volume one, and there’s a black and white reprinting on pulp paper in Essential X-Men volume one.