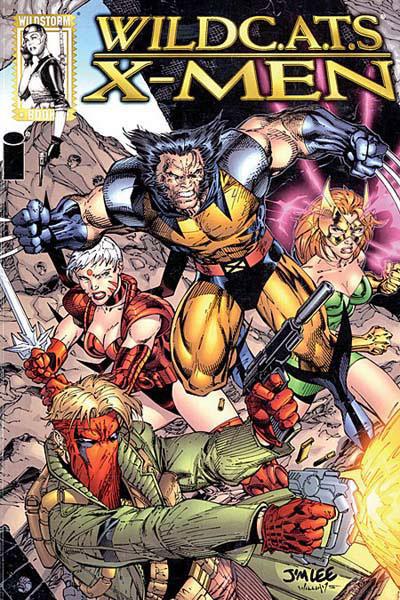 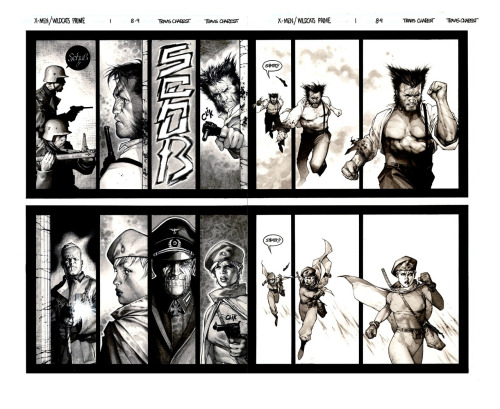 WildC.A.T.S./X-Men gathers four stories by different creative teams of meetings between the super teams (from different publishers) across the latter half of the 20th century, labelled according to the eras used by fans to date comics. It’s a decent connecting theme, enabling the near immortal members of the two teams to meet in 1940s Germany long before either team existed.

The opening story looks spectacular due to Travest Charest’s fine artistic choices. His layouts are strong, his fine-lined art attractive, and his choice to deliver most of the story in shades of grey inspired. It not only reflects the manner in which most experience the era via monochrome footage, but the occasional use of colour delivers a strong statement. Writer Scott Lobdell teams Wolverine and Zealot in what’s effectively one long chase sequence interspersed with clashes, but all the wonder is in the art.

Jim Lee illustrates the segment set in the 1960s, providing a weird incorporation of Neal Adams into his own style merged with Jim Steranko’s innovative layouts. Given that Lee’s 1990s art was cluttered and adorned with an excess of lines it’s not an attractive amalgam, but his many fans may disagree. Also written by Lobdell, the main plot teams Grifter with a pre-Phoenix Jean Grey, but also impacts on WildC.A.T.S. continuity by nailing down the point he began training with Zealot.

‘The Modern Age’ by James Robinson and Adam Hughes is the best story in the book by virtue of a superior plot, incorporating a full meeting of both teams. The Hellfire Club and Daemonites appear, but it’s hardly the work Robinson will be remembered for. Hughes, though, is impeccable, which is beauty before the beast as ‘The Dark Age’ doesn’t succeed on any level. It’s written by Warren Ellis at a time when he was coasting on an ear for smart dialogue and an eye for cheap shock. Mat Broome’s innovative layouts initially impress before the poor technique beneath catches the eye. His style alters throughout the story, occasionally morphing into Jim Lee, and further points are deducted for the ghastly and gratuitous fetish costumes.

Fans of the artists involved might find this a worthwhile package, but it otherwise promises much and delivers little.