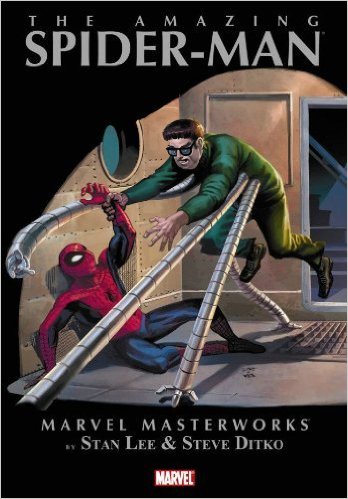 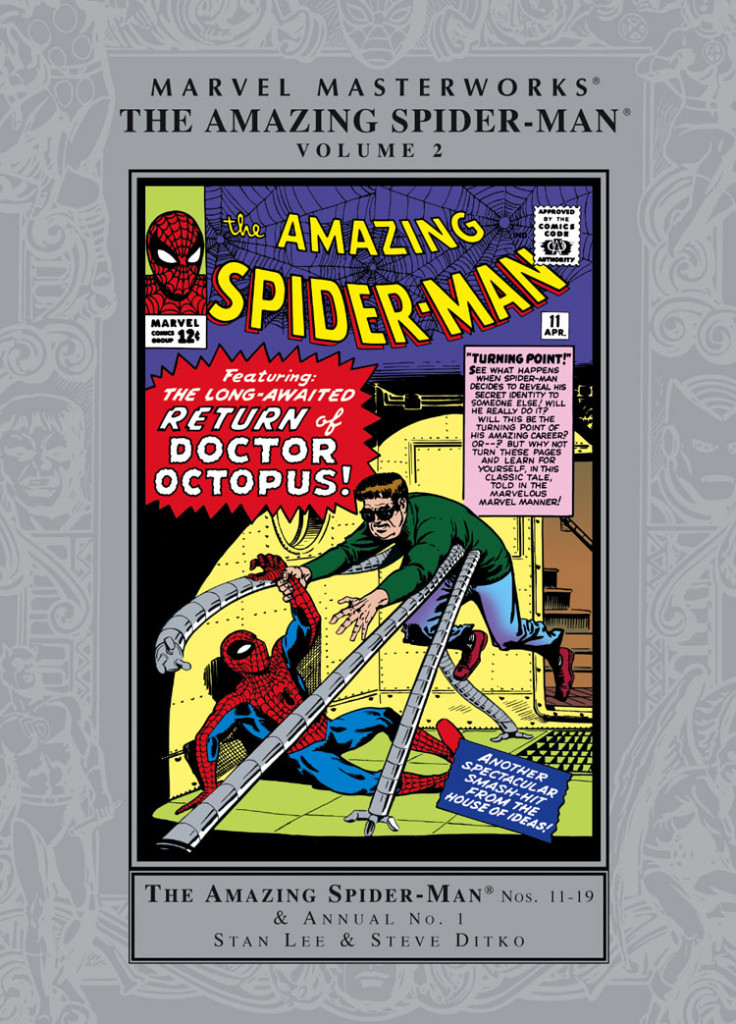 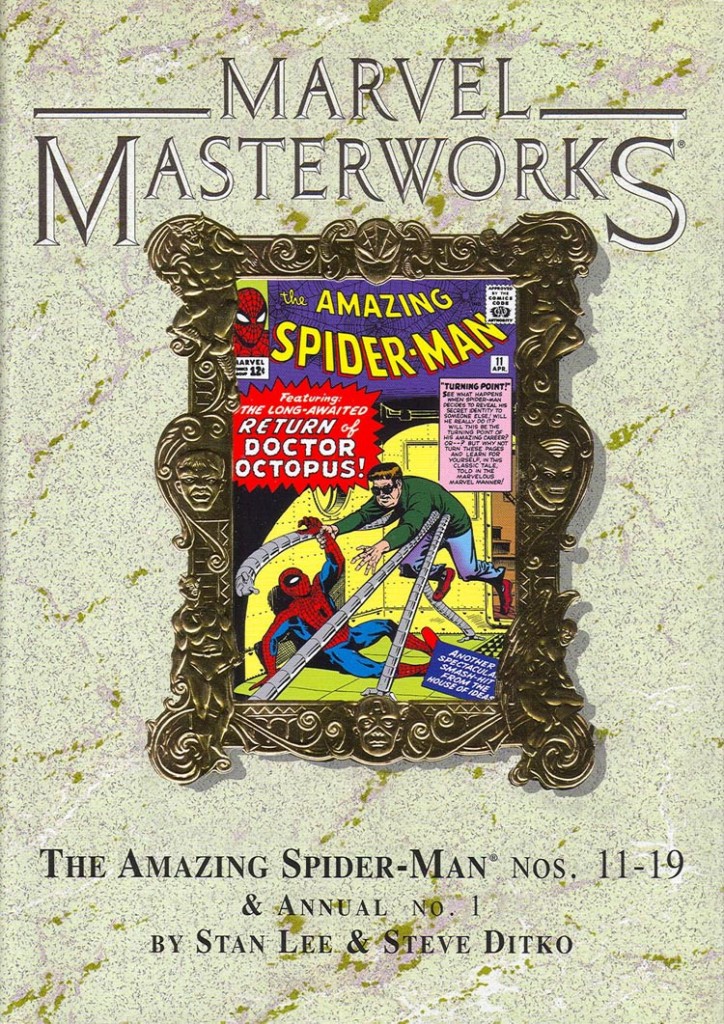 As is the case with the introduction of almost any new title, there were teething problems with the earliest issues of Spider-Man, but these were rapidly rectified, and there’s barely a foot wrong in this second collection dating primarily from 1964. It introduces recurring foes Mysterio, Kraven the Hunter and, most importantly, the Green Goblin, really cranks up the soap opera problems in Peter Parker’s life, and the spider-tracer is developed.

Appreciate what artist Steve Ditko compresses into a panel. Very few in the entire book lack a background, and his chosen viewpoint is almost always the middle distance, so as often as not Spider-Man or Peter Parker and those with them are seen as full or almost full figures. It’s a rare page with less than six panels, with eight and nine being the norm, which it speaks volumes as to Ditko’s work ethic. There’s no cheating and no shortcuts here.

There’s an awkwardness and uncertainty to his Peter Parker, and an odd quality to his Spider-Man. The depictions of the character perched on a wall, twisting between Dr Octopus’ metallic arms, or balancing on the struts of the Brooklyn Bridge have been repeated ad infinitum over the years. It’s a rare artist, though, who’s illustrated them with Ditko’s athletic grace, and Ditko who conceived these poses.

It’s with this volume that the idea of Spider-Man as perpetually misunderstood takes root. He’s impersonated to commit crimes, targeted by villains masquerading as heroes, and portrayed as a menace by the Daily Bugle. Stan Lee at this stage is still more involved in plotting, and while his dialogue tends to the florid, he sustains a very high level of tension by running Peter Parker through the wringer. His developing relationship with Betty Brant is constantly curtailed, his Aunt’s health is a concern, and while he’s successful in costume, this comes at a cost.

Two stories stand out. Six foes team to finish off Spider-Man in his first annual. Their not attacking him together is explained by each egotistically believing they should be solely responsible for his humiliation. As Spider-Man works his way through them Ditko supplies a full page action shot for each, so contrasting his usual style that it’s a stunning effect. Earlier printings place this out of sequence to close the book and also include issue 20, now shifted to volume three.

Matching this is the seeming end of Spider-Man. He’s revealed as cowardly, the world unaware his priority is caring for an ailing Aunt May as Peter Parker, to whom it’s occurred for the first time that she’ll be alone if he’s seriously injured fighting the Sandman. There’s some brilliant characterisation of former school jock Flash Thompson, Parker and Spider-Man’s lives falling to pieces and the almost permanently raging J. Jonah Jameson a happy man. Ditko illustrating him grinning is magnificently oily and perturbing. The following issue’s euphoric rectification isn’t quite as accomplished, but still of a high standard, and solidifies the friendly relationship between Spider-Man and the Human Torch.

Other highlights include the Green Goblin luring Spider-Man to the New Mexico desert intending to defeat him outwith his comfort zone, but neither realising a surprise awaits in the caves, a team-up with Daredevil, and the solidly menacing introduction of Kraven the Hunter.

These are also available along with all other Steve Ditko Spider-Man tales in Amazing Spider-Man Omnibus volume one, and collected along with the material from the previous volume in the more affordable black and white Essential Spider-Man volume one. All but the final two issues can also be found in the more recent Great Power.