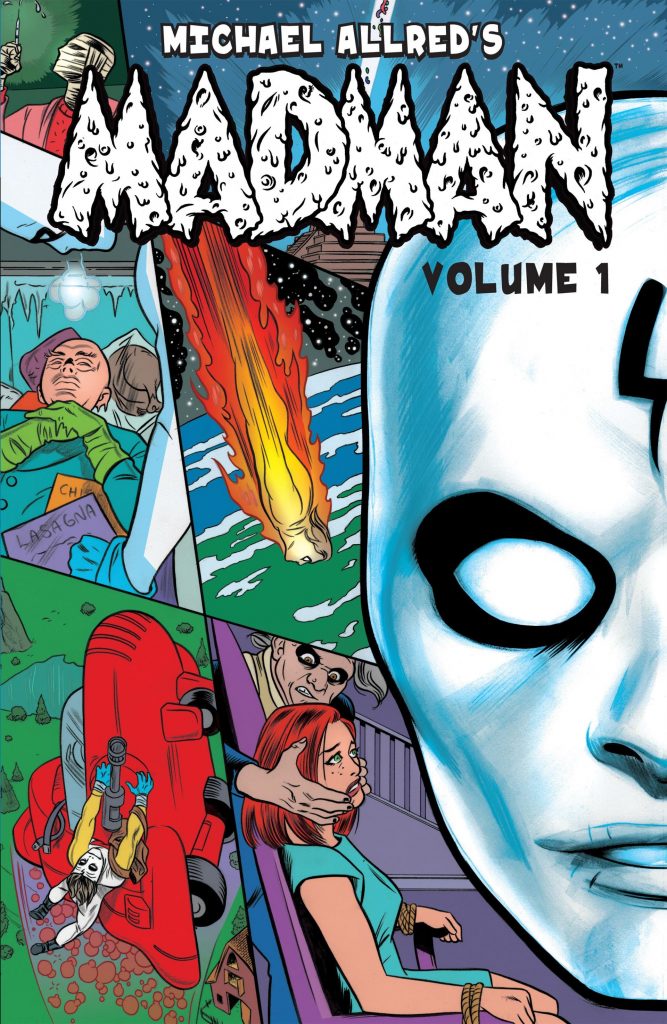 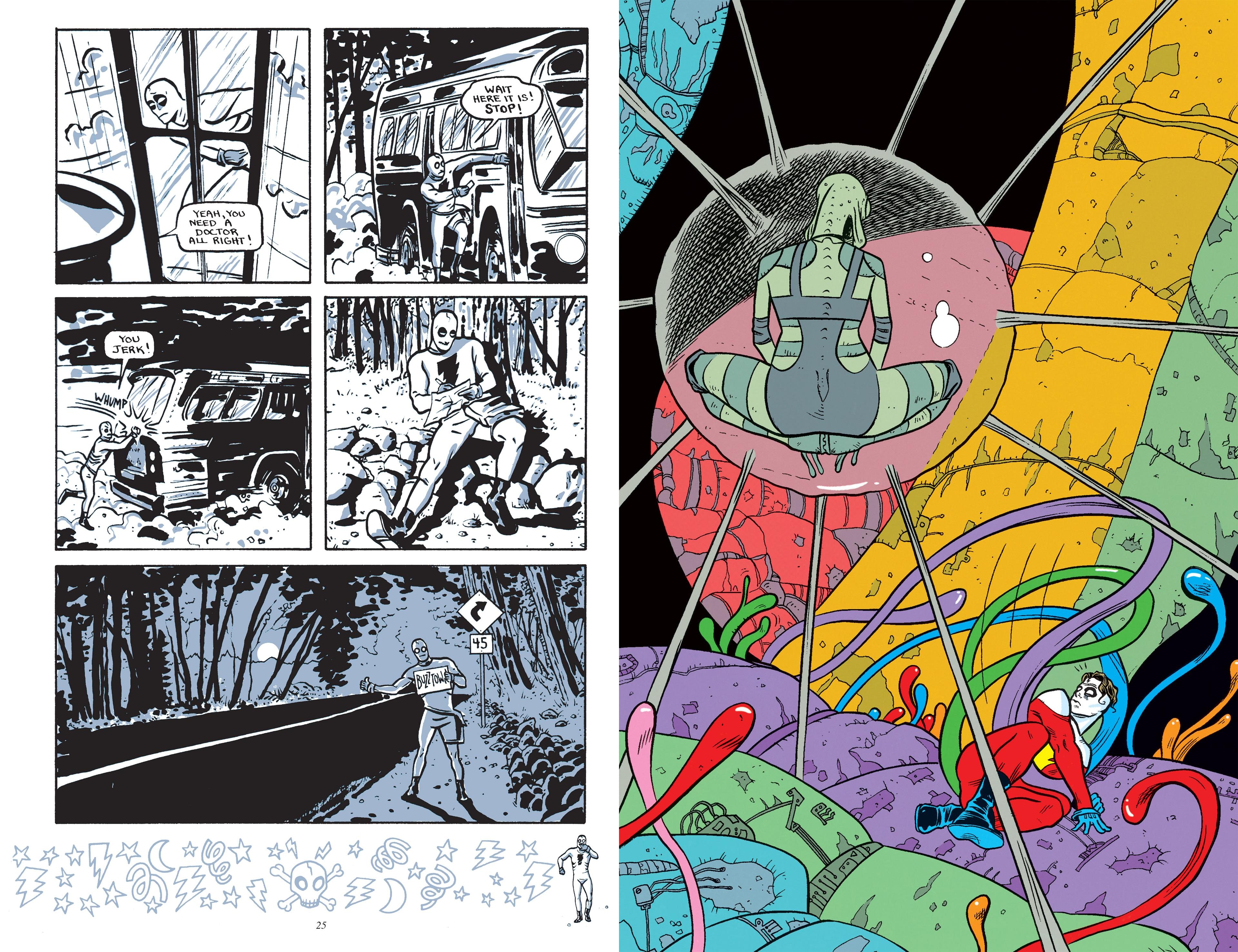 For such a popular character, it’s a frustrating and troublesome process following Madman’s chronology over numerous different publishers and several books labelled ‘Volume one’. Well, this is the ur book, Madman’s first prolonged costumed appearances, combining what was previously issued as The Oddity Odyssey and Madman Adventures.

Laura Allred’s bright colours are such an integral constituent of Madman that it’s strange to crack this book open and discover that Frank Einstein’s first adventure was in black, white and grey. Other oddities that were wrinkled out include a costume hood that covers his entire head and a tendency toward the gruesome later completely excised. If you want to see Madman removing an eyeball and sticking it in his mouth, this is the one time only opportunity. What’s astounding, however, is how much Michael Allred managed to hit the right note first time out. Despite the mis-steps into horror, the light and whimsical eccentricity is there, Madman conceiving unconventional solutions to dangerous situations, and the generosity of his spirit shining through. Allred the artist is also near fully formed. As with any top talent, he can surely point to a few panels that didn’t turn out as expected, and he hasn’t quite evolved the cartooning that would be associated with Madman, but for what was only his second long-form story, it’s some achievement.

Madman is never referred to as such. He’s Frank Einstein, returned to life by a nutty scientist, but left lacking any memory of his previous life, with a strange skin colour and a large scar across his forehead. In what’s unusual for the dramatic elements of superhero comics, his condition matters not at all to Joe Lombard, and for the remainder of the series theirs will be a mutual love untainted by tawdry soap opera plot considerations. Madman’s first outing requires he track down a Dr. Flem in order to save the life of Doctor Boiffard, the nutty scientist who saved him. It’s a discursive, but always entertaining mission.

The consequences of unfettered experimentation by visionary scientific engineers is a regular feature of the series, and results in Madman being deposited in prehistoric times. By the colour feature Allred’s made a few tweaks and the result is Madman as he’s been ever since. There’s the resolutely positive nature, colour pages and a joyful regurgitation of pop culture and scientific wonder. A final presentation sees Allred release his experimental side as dreams and hallucinations feature heavily in what’s an amazing artistic showcase, but less satisfying in story terms. It doesn’t matter in the greater context as Allred has now found his magical formula, and Madman has taken flight.

A fantastic bonus section should also be mentioned. Allred asked dozens of comic creators for a pin-up, and they responded incredibly enthusiastically. The roll call is a who’s who of comics. Genuinely. We have legends Jack Kirby, Alex Toth and Barry Windsor Smith, the hot turks of the early 1990s Jim Lee, Todd McFarlane and Marc Silvestri, the contemporary independent darlings Dan Clowes, Gilbert Hernandez and Jaime Hernandez, the classical stylings of Frank Frazetta, Michael Wm Kaluta and Charles Vess… and loads more people, equally good.

Volume 2 has a fine matching cover, and Image previously published both along with the third volume in the oversized Madman Gargantua!, but as that was very expensive limited edition this remains the best affordable option. 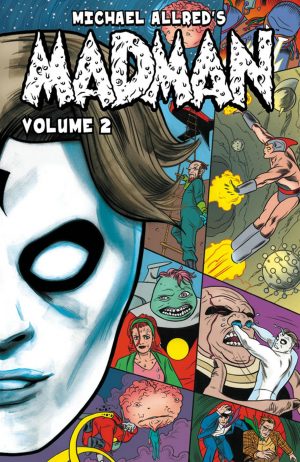 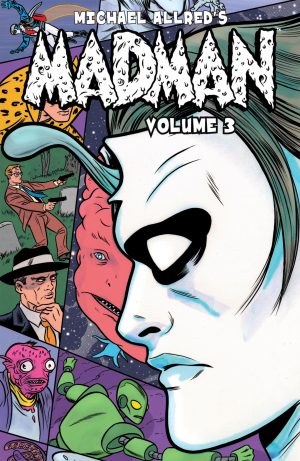 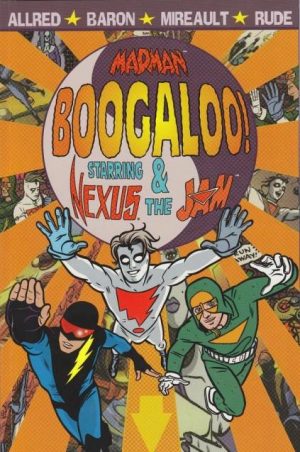