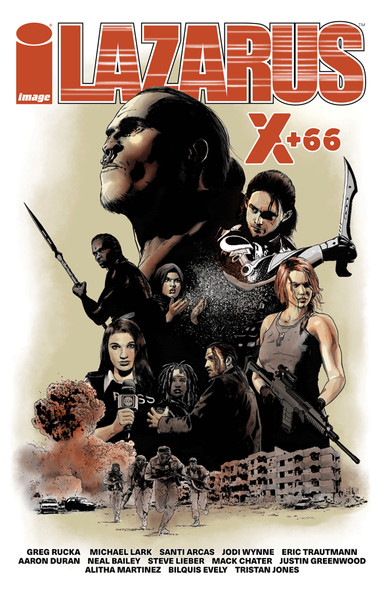 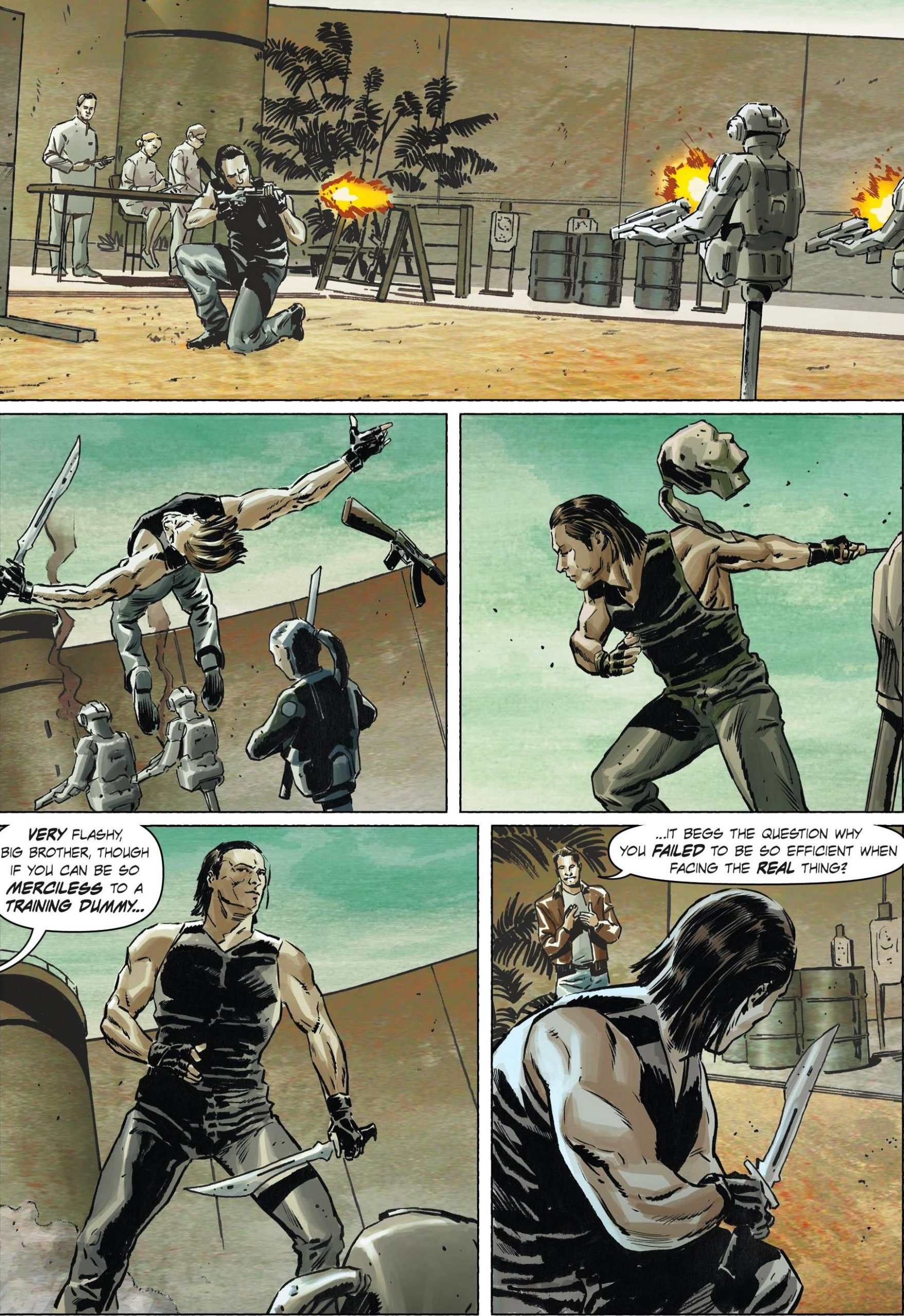 By the time Lazarus creators Greg Rucka and Michael Lark reached their fifth volume Cull, Lark, the kind of artist who works intensely one project at a time, needed a break and a change of scenery. As writer, Rucka saw the series taking a new direction, involving three other writers and six new artists for six chapters tying up plot points and preparing for this new start. X+66 focuses on cast members introduced through the course of the previous five books within a year of events in Cull and 66 years after X, the point at which the Families began their rise to power.

Introducing other creators into a popular and established series runs the risk of derailing your hard work. Thankfully the quality remains high on X+66, Rucka steering the ship with the help of Eric Trautmann, Aaron Duran and Neal Bailey, Trautmann contributing to three of the six tales. In ‘Special’ Casey Solomon has been sent to try out for The Daggers, Family Carlyle’s elite squad for her actions at the Battle of Duluth. Though blessed with the favour of “God”/Forever herself, does Casey still have anything to prove? ‘Binary’ explores the Lazarus Joaquim’s internal conflict after Moray’s betrayal of Carlyle. How do you hold onto your own honour when greed and power are your Family’s motives? When Michael Barret was drafted into the service of Carlyle (Lift) his parents Joe and Bobbie were given a life of luxury compared to their daily scrabble to survive as farmers out in the Waste. Their lives are so much easier, but can they ignore the injustices they see around them in what is effectively a totalitarian society?

‘Zephyr’ sees the Lazari Aalimah (Meyers-Qosimi) and Xolani (Nkosi) on a dangerous mission into the former territory of the now defunct Soleri Family. A research facility holds the key to turning the tide of war and defeating the formidable Zmey, but knowledge is power and the betrayal is a way of life. ‘Post-Fact’ follows Seré Cooper as she tries to prove her worth after being sidelined from her role as “Face of the Post”, the Carlyle sanctioned news. It’s a conspiracy thriller that overlaps with ‘Spark’ and suggests new developments for the future. ‘The Dragon’ tells antagonist The Zmey’s origins in flashback, a disturbing unpleasant tale that does not bode well for anyone trying to face him.

Artistically Steve Lieber (‘Special’), Mack Chater (‘Binary’), Justin Greenwood (‘Spark’), Alitha Martinez (‘Zephyr’), Bilquis Evely (‘Post-Fact’) and Tristan Jones (‘The Dragon’) pretty much stick to Michael Lark’s stylistic template, but each influence the tales in subtle ways. Martinez delivers high action levels for ‘Zephyr’ while Jones’ attention to unsettling details makes ‘The Dragon’ a disturbing horror tale. Greenwood’s art lends to the conspiracy thriller feel with a growing sense of disquiet in ‘Spark’. In the end all credit for each artist’s success goes to colourist Santi Arcas who ensures that every tale carries the tension and foreboding atmosphere that is a trademark of the series.

Essentially X+66 ties up loose threads from earlier volumes and hints at ground shaking events on the horizon. Being short stories they don’t always move fluidly, but they are inventive and intriguing, injecting freshness into the series and won’t disappoint old fans. X+66 can be found with Cull in Lazarus: The Third Collection.

The series continues with Fracture, not numbered in the same way as the previous books and re-starting the series.