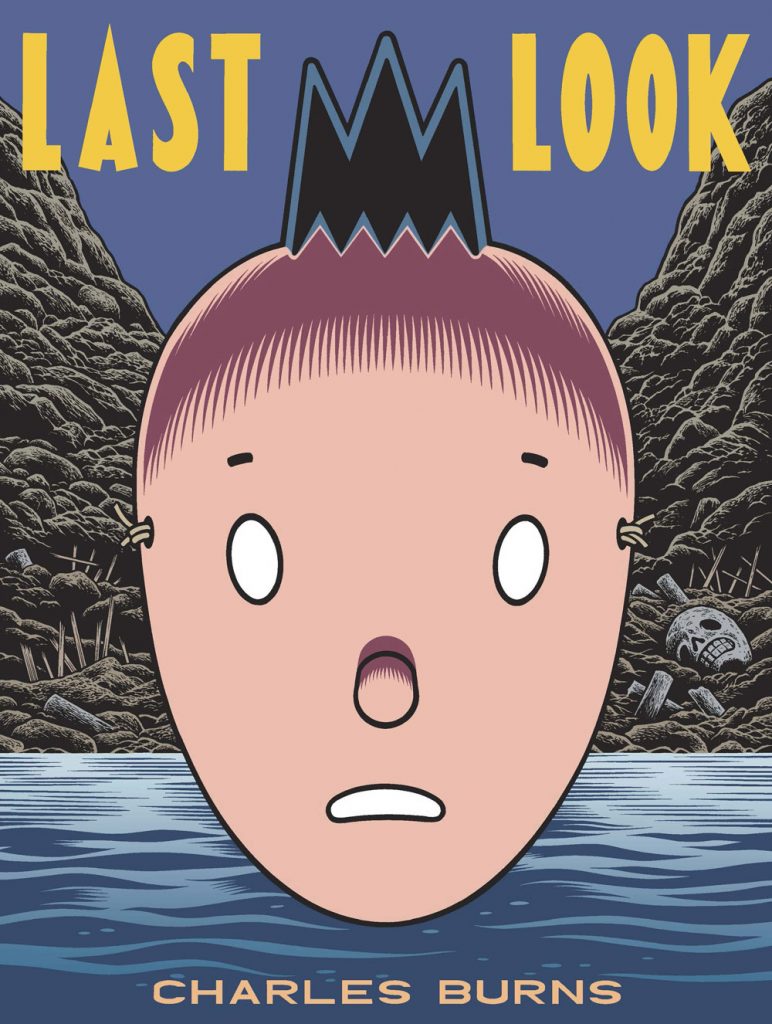 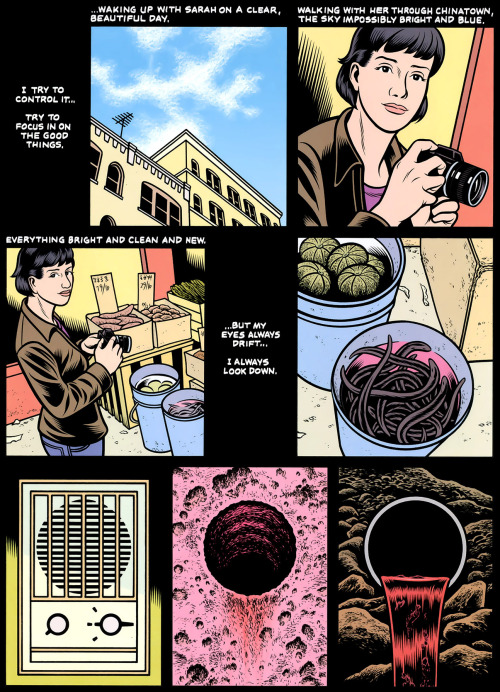 Burns’ art has the classic American comics style of brush-inked black lines, but composed and rendered with such painstaking precision and elegance, as to become Lichtenstein-like works of formal beauty. His drawings are realistic and diagrammatic at the same time, and may have inspired Dave Gibbons’ art on Watchmen. This trilogy is Burns’ first major work in colour, and he uses mostly flat but subtle colours that complement his line work perfectly. As a one person labour of love, it’s perhaps not surprising that the trilogy took six years to complete. His distinctive style, though, can mask his range – he’s always been able to move between more abstract stylings and a greater realism. Here though, he goes further, juxtaposing fantastic and realistic versions of a character facing similar concerns.

The first part, X’ed Out opens with a character drawn in a ligne clair style evoking Hergé, and looking like a young adult version of his Tintin. He wakes up in a slightly more realistically drawn room, and follows his cat through a hole in the wall into a strange landscape. This recalls classic portals to fantastic worlds through a looking glass or a wardrobe. Yet it’s a much darker world we go into, initially mixing sewer, wasteland, and archaeological dig, then (as he reaches ‘civilisation’) grotesque and melancholy scenes in factories, canteens and markets.

Later we see a more realistic version of the same character, an art student called Doug, wake up and begin a journey that’s more naturalistic, yet equally strange. He climbs a ladder into a party with performance art, punk rock, and pills, and most significantly – a relationship with edgy fellow-student Sarah, whose possessive ex-boyfriend Larry is introduced as yet-unseen threat.

When we return to the Tintin version, he’s under-reacting to the encroaching strangeness of The Hive. He doesn’t flinch at the canteen food’s mixture of the familiar and the alien, or sense the threat facing the young women. In the realistic strand though, the characters are the opposite – knowing and ironic. Both versions play out recurring Burns themes: adolescent confusion and alienation; romantic longing; the struggle between self-confidence and self-loathing; and the feeling of being an outsider even amongst other outsiders. The portal they both go through seems to be into adulthood – there’s the shock of seeing the older generation as people too, with their hopes and disappointments, and the recurring spectre of your actions having consequences you’ll need to face up to.

The final part, Sugar Skull opens with an older-looking Doug, and continues the flashbacks of his relationship with Sarah, including the inevitable face-off with her menacing ex. The flashbacks take us up to the point where the first book started, then their story continues into the years ahead. Questions about quite what happened with him and Sarah are answered, though for fans of the weirdness, perhaps a little too tidily. Burns is a confident guide to his strange world, but he doesn’t moralise or tell us what to feel, instead letting us have our own response.

All of this then, is distinctively Charles Burns, yet even after decades of his unsettling weirdness, it still feels fresh. The effect is multiplied by the complementary fantastic and naturalistic narratives, and the sensitive addition of colour. Burns fans will definitely want this, and for those new to his work, it’s as good a place as any to start.