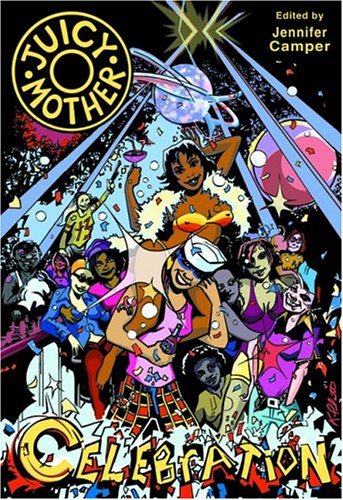 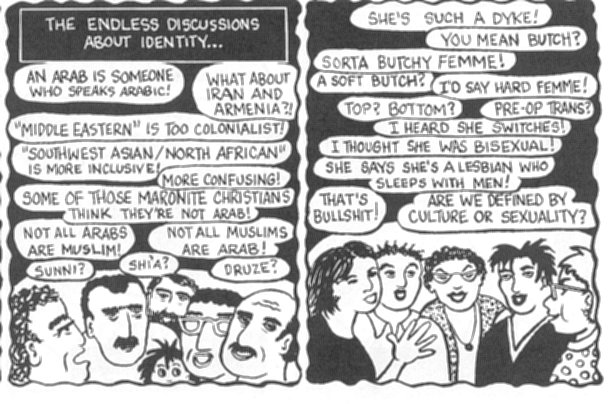 Opening an anthology with one of Diane DiMassa’s in-your-face stories is a clear signal: we’re not here to cuddle you! DiMassa doesn’t even know how to cuddle her readers, although her characters aren’t looking for anything more exotic than love and friendship. Right from the start, Juicy Mother shows that it’s not here to mollify or please a complacent audience.

Robert Kirby (Curbside) teams up with film-maker and producer Stephen Winter for another bitter-sweet story of young love in New-York City. Between DiMassa and Kirby’s art, the contrast couldn’t be stronger: there’s a manic energy in the former’s line, whereas the latter’s is all round and precise.

Ariel Shrag (Potential) contributes two short autobio stories, while Alison Bechdel (Dykes to Watch out for) manages to both skewer mainstream press’ attitude toward minorities and gently mock her own reactions. Italian artist Serena Pillai gives us a rather hot encounter between a young dyke and her butch cousin, and the far too rare Howard Cruse only contributes one page, about an old woman’s view of typewriters. After Leanne Franson (Liliane) tells the story of her art-school crush which lead to the offering of a chicken head, Michael Fahy gives new meaning to one of Shakespeare’s Sonnets in a sexy interpretation, and then Jennifer Camper (Rude Girls and Dangerous Women) writes and draws one of the strongest contributions to this very good and varied anthology.

Entitled ‘Ramadan’, it tells the story of Arab lesbians, and the way anti-Muslims/anti-Arabs racism can compare with homophobia, especially in the current American climate. Thanks to talks with a number of concerned women, Camper manages to tell a realistic story where personal and societal problems conflate, which doesn’t prevent those women from living a full life, some being quite religious. Camper’s strip feels like a good documentary on the specificities of the lives of people who might find themselves doubly lost, among other Arabs for being queer, and among queers for being Arab.

Back to funnier stuff, we have a one-pager by Joan Hilty (Bitter Girl) about the dangers of reading One Hundred Years of Solitude after a break-up, and former Gay Comics editor Robert Triptow contributes an acerbic strip about gay marriage. The following jam between some contributors is also quite funny, if only because all those artists with so different styles in art and themes seem to have a blast lampooning each other. Ivan Velez Jr. creates a very weird strip where a young, angry girl discovers why a bland classmate often sleeps at school, and Jennifer Camper and G.B. Jones close the book with a fun story showing dangerous lesbians at play, drawn in a style reminiscent of Tom of Finland, without the big dicks, obviously.

As these too short indications hopefully show, Juicy Mother is another proof of the vitality and variety of queer cartoonists. Editor Jennifer Camper selected the contributors well, a job she would equal with  the second volume of this anthology.