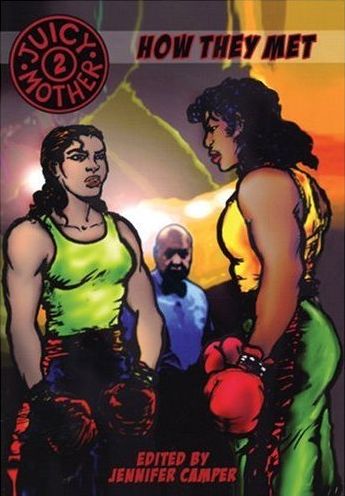 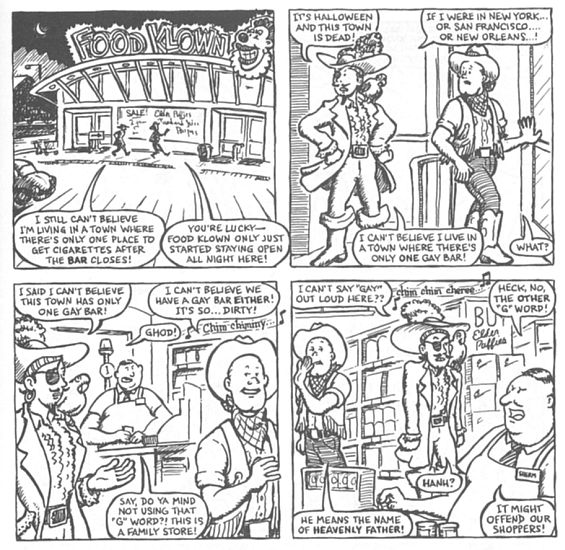 A couple of years after the first volume and with a change in publisher, editor Jennifer Camper and her very varied crew are back with Juicy Mother 2: How They Met. This time, the theme is about people meeting–or leaving–each other. There’s a strong independent/underground vibe, more than before, and this also almost doubles the size of that first book, providing space to even more artists, who all have a very personal style.

There are more than 25 contributions offered here, and rather than offer a few words about each it’s worth highlighting a few.

Robert Triptow‘s ‘Food Klown’ has two lovers dress up for Halloween, hoping to have fun somewhere in their staid town, only to meet a kindred soul in the most unlikely place. Triptow’s brand of humour is very effective, mocking a lot of sacred cows, and his detailed art somehow manages to both give a believable life to the characters and comment on their foibles. Triptow is a long-time cartoonist who’s far too rarely seen nowadays.

Lawrence Schimel and Sara Rojo Pérez’s contribution couldn’t be more different. ‘The Anniversary’ is an extremely cute and engaging tale of family life, where two young boys, one raised by two men and one by two women, all friends, spend an evening with the women, while the men are out celebrating something. The boys then philosophize about the two dads, wondering how they met and what they can be doing right now, showing they’re perfectly aware of what goes on between adults, and find it rather funny, while the two women are divided between behaving like moms (“don’t talk like that!”) and laughing with the boys. There’s a warmth and ease in the conversation that induces a big smile, a testament to the talents of the writer and the artist, who draws in a children’s book style perfectly suited to the subject.

Joan Hilty is also a cartoonist, and in ‘Zion’, we meet two teenage girls, one from a Mormon family, with a stern father and an innocent outlook on life, and the other, definitely not well-off, who lives with her somewhat unhinged grandmother and is far more wordly-wise. They find themselves working together on a school project, and an unpredictable friendship begins–or maybe more. While this is only the first part of a longer story, Hilty has created interesting characters, separated by family traditions and views on life but joined by circumstances. Her cartoony style might seem simple, but is has that priceless quality of bringing people and surroundings to life with only a few strokes and she has a fine knack for body language.

Jennifer Camper’s contribution might be the most powerful in the book, politically speaking. As with her story in the first volume, she manages to create a character who defies stereotypes. Rania, a young lesbian from Egypt, has a factory job, does the night shift and gets along well with the other workers. When she meets one of her neighbours, a married woman seemingly interested in a little affair, she loses control of her life. ‘Night Shift’ is not about the conflicts of lesbian life, but more about the difficulties of people without much control over their lives, this time for economic reasons.

There are other good contributions in this collection, and anyone with an interest in indy comics should find a favourite.