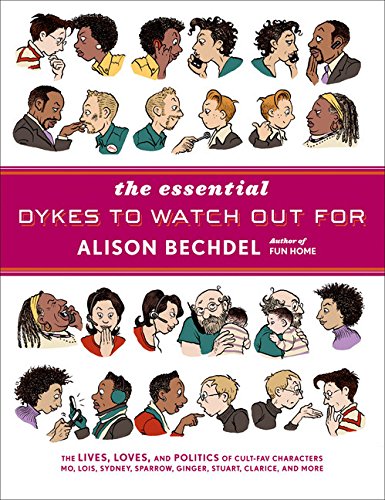 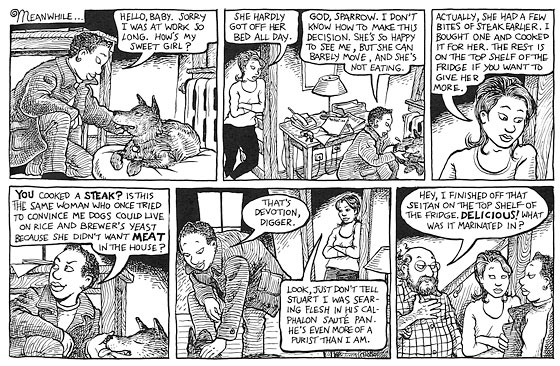 Now perhaps better known for the acclaimed Fun Home and the Bechdel test, Alison Bechdel first made her reputation with the strip Dykes to Watch Out For. This chronicle of the lives of a group of lesbian friends living in a mid-sized American city ran with its regular characters from 1987 to 2008 (technically it remains only on hiatus, but there is no sign of new material). Essential Dykes collects most of that material, leaving out 137 of the full 527 strips. One of those omitted, interestingly, is the one that first introduced the Bechdel test. Those that remain give a good coverage, and the reader rarely feels that they are missing any part of the story. There is also a twelve page introduction, which both explains the background that led to Bechdel creating the strip, and asks serious questions about what she thought she was doing, and what she was actually doing.

At the centre of the strip is Mo. This character is clearly based on Bechdel herself, but is quite a self-critical portrayal. Mo often appears overly intense, self-righteous and sometimes even sanctimonious, though the character remains essentially sympathetic. Often the strip deliberately confronts Mo with challenges to her perceptions of what being lesbian and queer are all about – Lois (who is sometimes almost the conscience of the strip) cross-dresses as a man, Sparrow after a long period in a relationship with a woman takes up with a man (albeit a man who often wears a kilt), and Jasmine’s child Jonas decides that she is actually Janis. Mo’s preconceptions about the disabled are also shaken up by her encounters with co-worker Thea. Bechdel writes all the characters with warmth and sympathy.

The strip is open about sex, with quite a bit of nudity, especially in the earlier stories, and overtly political. It is clear that there is little love here, either on the part of the author or most of the characters, for Presidents Reagan, Bush Sr, or Bush Jr, but also not much for Clinton or Obama, who are often seen as at the very least disappointments for progressives. Yet Bechdel’s sympathies are extended to right-wing conservative Cynthia, who has to negotiate the difficult dichotomy of being Republican and gay.

The artwork is quite crude in the very earliest strips, but it soon smooths down into a warm cartoon style. The work is funny, enlightening, and sometimes (as with the strips dealing with the deaths of beloved pets) deeply moving. Highly recommended.