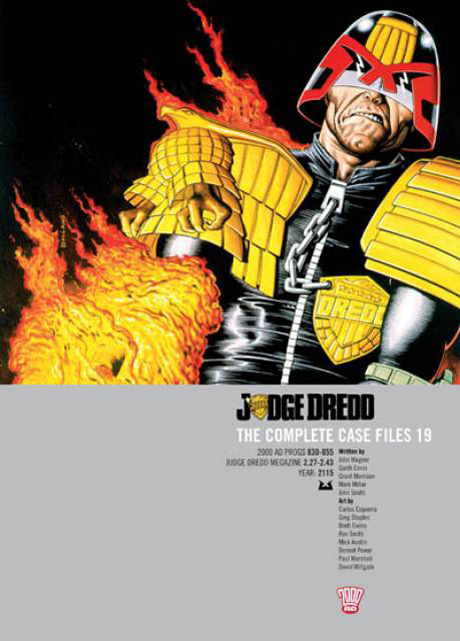 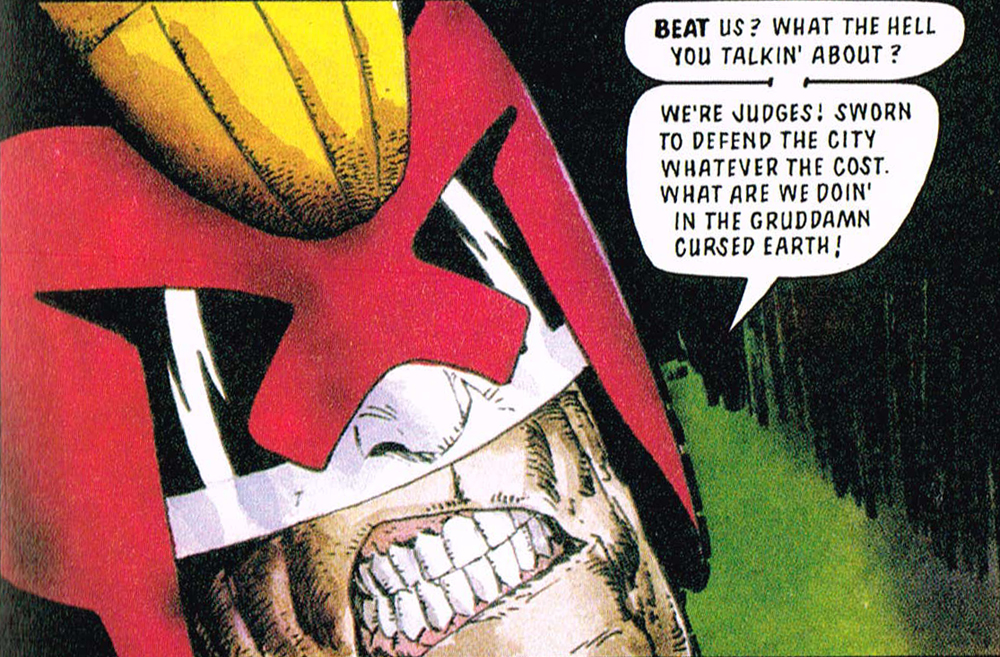 Case Files 19 begins with five Garth Ennis-penned tales, the best of which is ‘The Chieftain’, a futuristic Scottish-flavoured take on The Outlaw Josey Wales. The Mick Austin illustrated revenge story is largely by-the-numbers, and one doesn’t have to look far for similar Dredd stories, but it is done well.

Then we get a couple of clunky stories by Mark Millar, before the longest story in this collection, the twelve part ‘Inferno’, Grant Morrison’s only Dredd story. Mega-City One is attacked by ex-Judges who have escaped from their lunar penal colony. Morrison said, “My objective was to write Dredd as an action movie. All of the Dredd stories I did were attempts to develop a filmic approach to the character. I couldn’t see much else to do – at least Batman has Bruce Wayne, giving him all of two dimensions.”

Morrison’s successful in aping the feel of an action movie, with explosions, multiple deaths and mayhem galore. Much like all the other tribulations that Dredd has had to endure of late. Although Carlos Ezquerra, drawing the entire story, produces some of his best work in years. Morrison’s lack of empathy for Dredd is most apparent at the climax, where he has Dredd behaves in a way that one strongly suspects John Wagner would have handled differently. This is yet another example of a writer (and a good one at that) just missing the point and portraying Dredd as a vicious bastard. It’s little wonder that many fans feel Wagner is the only person who can really write Dredd.

After ‘Inferno’ (also available as an individual book), we have another pair of stories by Millar, and the second is probably his best effort in this collection (and that’s really not saying much). Then we’re into the section of material reprinted from the Judge Dredd Megazine, and it’s time to guess who wrote and drew what, as this book won’t tell you. The first two mediocre stories are by John Smith, then it’s over to Wagner for the remainder. While undeniably the best Dredd writer, here he struggles to produce much of note. And, with a couple of exceptions, the stories are not helped by uninspired or amateurish artwork.

To wrap things up we have the third appearance of the robot judges in ‘Mechanismo – Body Count’. A year after disappearing into the sewers, Number 5 is on the rampage again. Luckily, Chief Judge McGruder is ready to roll out the next generation of Mechanismos, so she intends to have them pursue and destroy the psychotic robot. To say Dredd is against this plan would be to put it mildly, and his blunt assessment of McGruder’s mental state is one of the most amusing scenes in the entire book. Events in this tale (which sees Dredd falsifying evidence in order to have the Mechanismo programme shut down) would have repercussions for later stories.

Colin MacNeil drew the first Mechanismo story beautifully, and Peter Doherty did a great job on the second. Manuel Benet, responsible for the art in this instalment, has a very similar style to Doherty’s. Similar, but nowhere near as good.

One of the weakest books in the series. Although it does have a nice Brian Bolland cover.