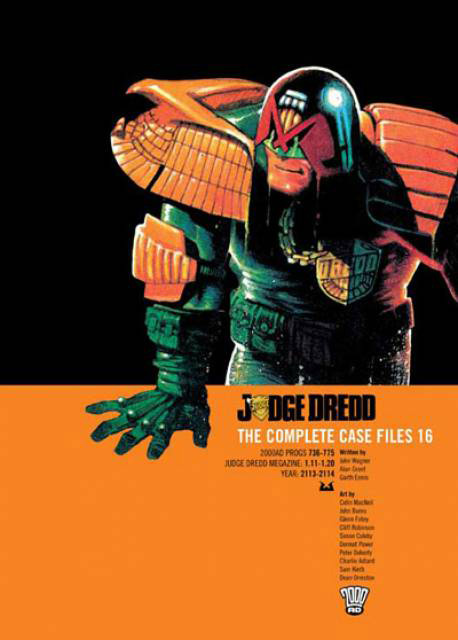 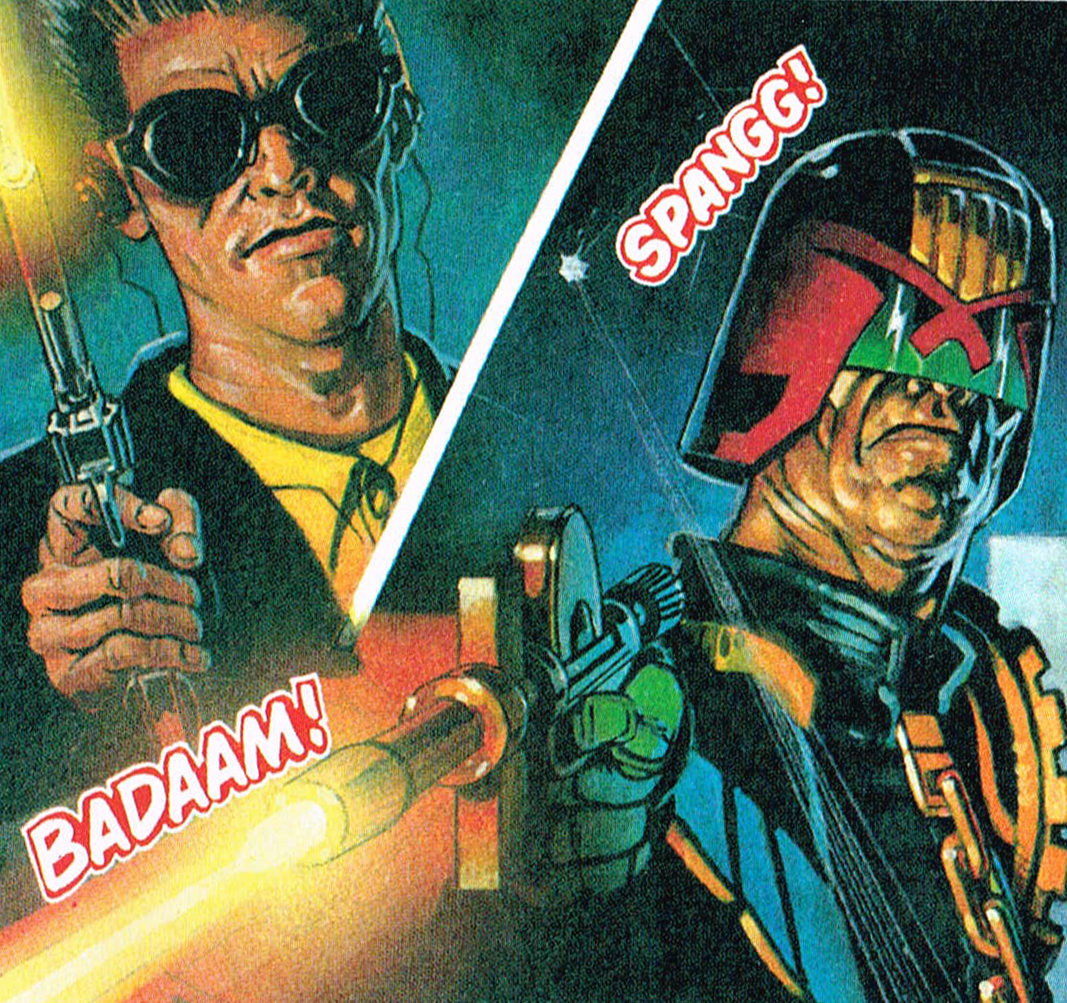 Case Files 16, written by John Wagner, Alan Grant and Garth Ennis, contains stories from both 2000 AD and the Judge Dredd Megazine, continuing the practice begun in the previous volume.

We kick off with ‘Firepower’, a great six-page story written by Ennis and illustrated beautifully by Colin Macneil (the front cover picture is lifted from this story). This is perfect Dredd: exuberantly violent, bonkers and with Dredd displaying great dry wit. Unfortunately, few following stories are up to the high standard set by the first, though there are exceptions.

Ennis teams up with John Burns to produce three other winners: ‘Garbage Disposal’, ‘Twilight’s Last Gleaming’ and ‘The Art of Geomancy’. The last is perhaps the best story in the collection, revisiting the saga of Stan Lee, the assassin sent to kill Dredd (he failed, but his pals are a bit upset). Burns’ style is very Modesty Blaise, which won’t appeal to everyone, but he’s very good, with pages that wouldn’t look out of place in an upmarket French graphic novel. Which, when you see some of the other artists on display here, is high praise indeed. Though his Dredd does look like a skinny old man.

Other highlights, art-wise, include Glenn Fabry, whose stuff is always nice even if everyone looks, strangely, like ancient Egyptians. And Dermot Power is good, though his work is very similar to the aforementioned Fabry, all grimaces and glowers. Dean Ormston’s nice art on the seven-part ‘Raptaur’ is Simon Bisley-like, and follows the Megazine’s apparent aim to include as much evisceration as possible in each story. On the whole, it adds nothing to the Dredd chases an Alien-type alien through the streets of Mega-City One plot, which has been repeated time and again. But it looks nice.

With the exception of those mentioned above, there are few standouts. Ennis is keen to show off his knowledge of Dredd’s past, either referencing it in conversations or using it as a stepping-off point for his own material. While it’s comforting that he knows his stuff, it can be a bit wearing and obvious at times. He also has a few stumbles, with clumsy dialogue apparent in a few stories.

Wagner, a seasoned pro, stumbles badly too. The final three stories, from the Megazine lack credit pages, although are all written by Grant and are different kinds of bad. ‘The Hand of Fate’ has poor artwork from Charlie Adlard. This is followed by ‘The Boy Who Thought He Wasn’t’, where Russell Fox’s amateurish artwork is matched only by the awful story.

These, however, are as nothing compared to Sam Kieth’s work on ‘I Was a Teenage Mutant Ninja Priest Killer’. Truly. Awful. This staggeringly pointless story seems to be neither spoof nor homage, and has no reason for existing (something to which it admits by blatantly dodging any explanation for the ‘plot’). One could be forgiven for cynically assuming that the publishers wanted Kieth to draw something he was familiar with, as his depiction of Dredd clearly demonstrates no such knowledge of the Mega-City lawman.

So, a strong beginning, a piss-poor ending, and the usual mixture of the good, the bad and the ugly in between. Not a great collection, but enough good stuff here, just, to make it a worthwhile read.