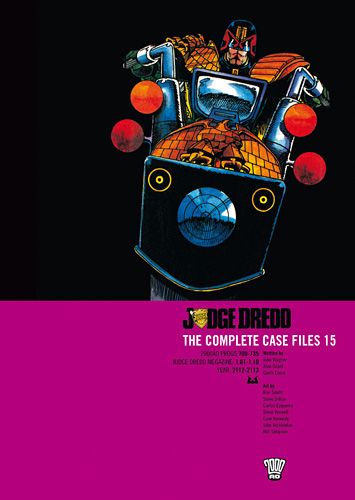 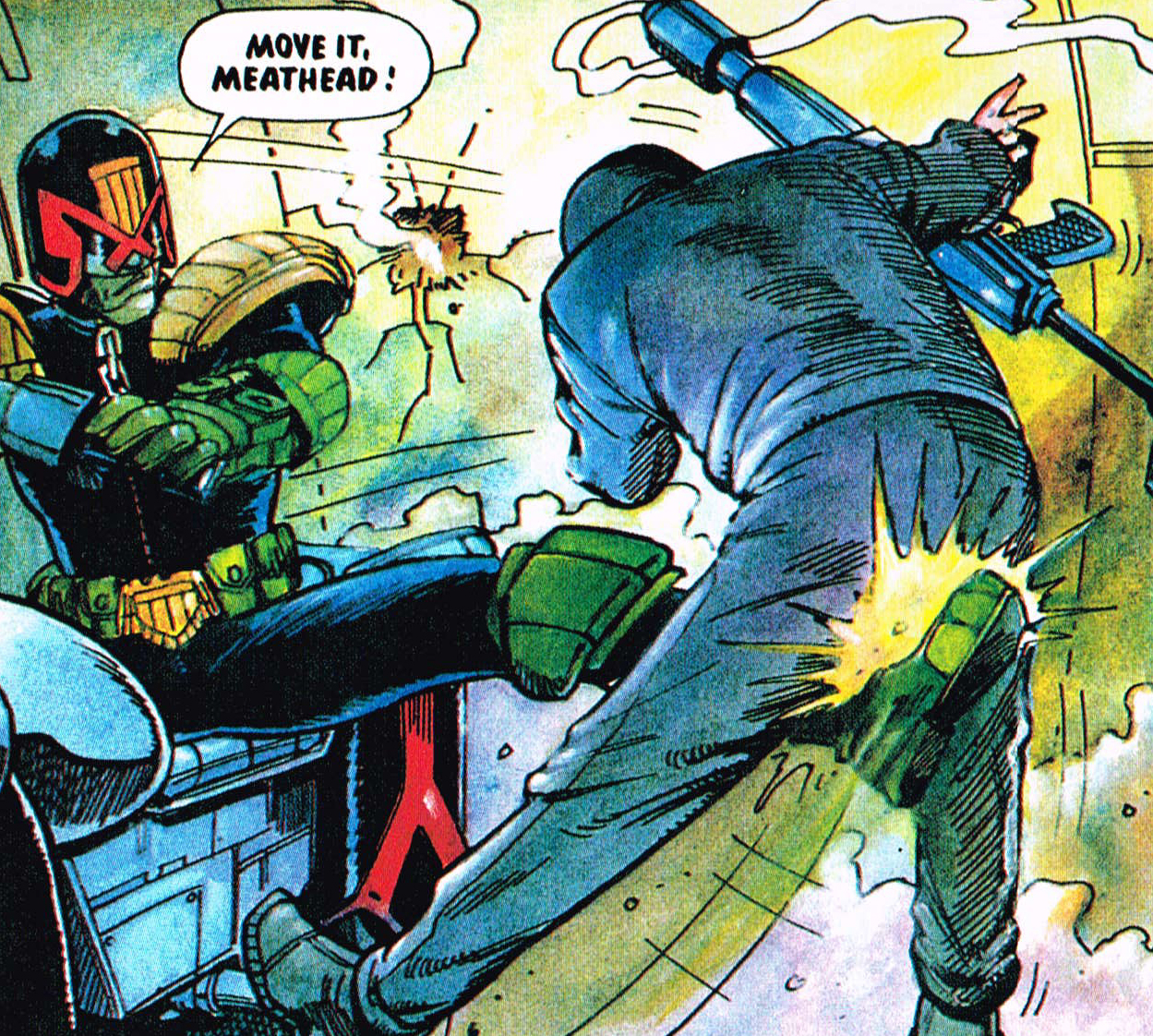 Over a thirteen year period since his 1977 introduction, John Wagner and Alan Grant had written most Judge Dredd, and all since 1979, but Case Files 15 also includes stories by Garth Ennis, brought aboard so Wagner could concentrate on the Judge Dredd Megazine, launched in 1990. This is the first volume to include stories from the Megazine, with longer episodes and content pitched at a slightly older age group than 2000 AD episodes. Unless indicated otherwise, all stories are written by Wagner.

‘What I Did During Necroplis’ (sic) by Anthony Williams is a light-hearted romp featuring the return of psycho P. J. Maybe, who relates how he fared during Necropolis. The story is amusing, though the art is cartoony. This is followed by a mercifully short story with poor art by Mike Hadley.

‘Death Aid’, by Ennis, has sloppy Carlos Ezquerra art: at one point the number of bars in Dredd’s respirator changes between panels. How often has Ezquerra drawn Dredd? Ennis handles himself well, with his Dredd tough but witty. Later writers would prove that it was harder to strike the correct tone with Dredd than one might think. Ennis shows what he can do with Dredd in ‘Emerald Isle’, one of the book’s highlights. Dredd’s never more fun than when a fish out of water, which he certainly is in the easy-going version of future-Ireland depicted here. There’s loads of humour, cracking action and top class artwork from Dillon. Both these longer Ennis tales can be found as individual graphic novels, although long out of print.

Five single part stories mark the midway point. Steve Yeowell proves he really can’t draw children, and Wagner doesn’t always get it right, here resorting to the world’s oldest cliché. Gary Caldwell’s art on the next tale is unremarkable before Cam Kennedy shows what a difference a good artist can make, lifting the story to the almost-mythic level at which Dredd often operates best. George Coleman’s ‘Driller Killer’ is amateurish, and the final short story reworks an old plot, though helped by polished art from Dermot Power. Then we’re back to longer stories with the four-part ‘Bill Bailey, Won’t You Please Come Home’, illustrated by Vanyo in a style that could be from the 1970s.

‘Return of the King’, features an undead Chief Judge Silver. ‘Necropolis’ was overstretched, and this Ezquerra-drawn postscript only serves to stretch it further still.

The remainder of the book features Wagner and Grant stories from the Megazine, but it’s a shame there are no credits. Grant’s five-part Midnite’s Children, is a humorous tale of a dysfunctional family complemented by Jim Baikie’s accomplished artwork. Also written by Grant, ‘I Sing The Body Electric’, features polished artwork by Dean Ormston.

The penultimate ‘Black Widow’, is three Wagner chapters drawn by the late John Hicklenton, whose style wasn’t to everyone’s taste, although his work is certainly striking. Will Simpson’s art on the final story, ‘The Gipper’s Big Night’, written by Grant, is so dark it’s hard to tell what’s going on.

Like many in this series, Case Files 15 is a mixed bag. On the whole, it’s a weak collection, with a low hit rate of memorable stories. However, Garth Ennis is a welcome addition to the small number of writers that have been entrusted with the keys to Mega-City One.