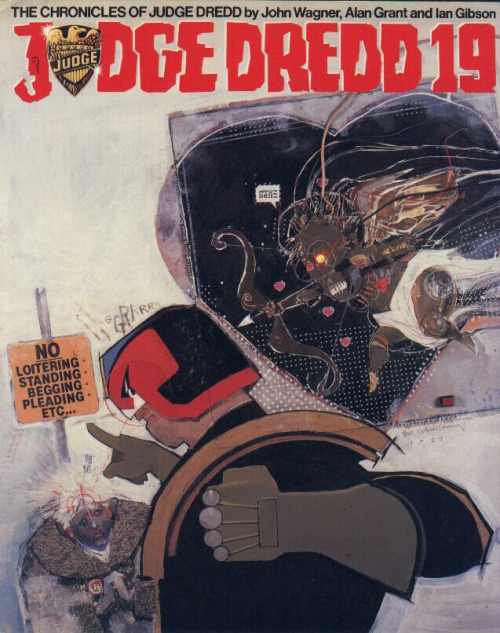 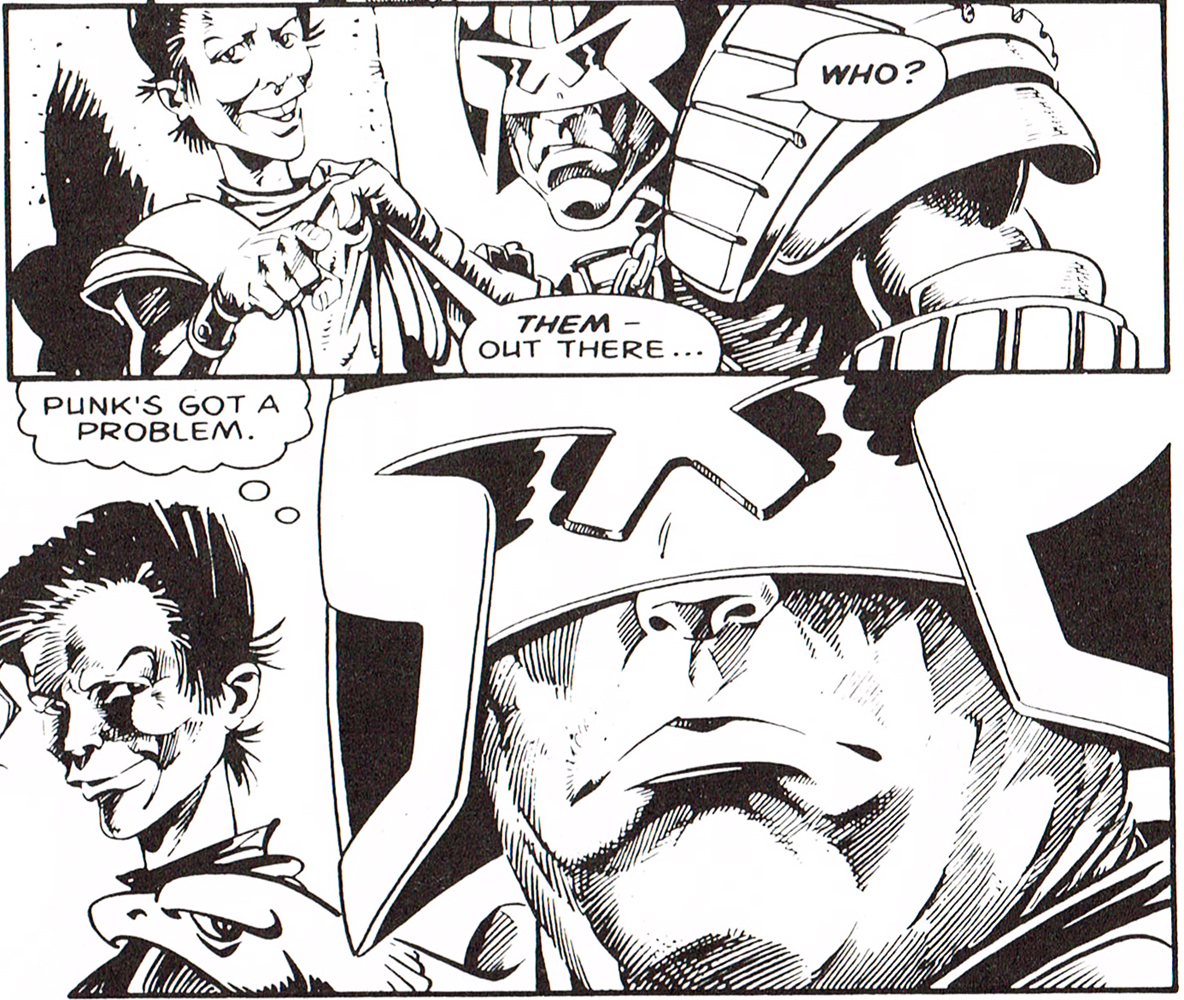 Judge Dredd 19 features the artwork of Ian Gibson, and includes seven stories, all written by T. B. Grover (Alan Grant and John Wagner). Gibson himself also employs pseudonyms, and is credited as Emberton or Q. Twerk. Quite why he bothered is anyone’s guess. While writers can easily pull the wool by using an alias, most artists’ styles are so recognisable as to make it pointless, and Gibson is certainly no exception.

‘High Society’ is a tale of hubris set aboard an orbital space station that offers luxurious living for the filthy rich. Or at least it does until the Judges force them to take a bunch of ordinary Mega-City citizens too, with inevitable consequences.

‘The House on Runner’s Walk’, inspired by Cary Grant’s Arsenic and Old Lace, concerns a couple of delightful old ladies who take in guests, lobotomise them and collect their welfare checks. This is the kind of tale that could be pretty bloody in other hands, but which Gibson’s style manages to keep this side of amusing rather than gruesome.

‘Rumble in the Jungle’ is a three chapters of a massive juve riot, and it’s a good example of a story that might have been a better fit for someone with grittier sensibilities. The art is wishy-washy, and would have benefited greatly from more solid blacks. Although, it must be said that Gibson’s design for the Manta Tank (which first appeared in this story) is excellent, and the vehicles would become a regular feature of Dredd stories.

‘Are You Tired of Being Mugged?’ is a silly little story of yet another Mega-City One craze that gets out of hand. Yet, ‘It Pays to be Mental’, another comedic tale, is the best in the book. Jim, the card-carrying mental case who narrates the tale, is very amusing, and breaks the fourth wall to speak directly to the reader on a few occasions. Jim would later return in ‘It Still Pays to be Mental’.

‘Bob’s Law’ is a slight story about an administrative decision causing mayhem, as citizens riot when their housing sectors are renamed, and in ‘Love Story’, the final story in the collection, Dredd has to deal with the one thing he’s never gone up against before: someone falling madly in love with him. Bella Bagley would also return further down the line.

This collection’s (un-credited) cover is by Bill Sienkiewicz, and it also includes, inside, two Gibson front covers from 2000 AD.

In his introduction to this collection Gibson admits that he’s always leaned towards cartoony in his depiction of Dredd and his universe, probably in an attempt to leaven what are otherwise undeniably violent stories. Grant and Wagner told a mixture of whimsical and gritty tales, in any number of genres, and Gibson’s style is undeniably better suited to the lighter tales.

The stories in this collection can also be found in the Judge Dredd: The Complete Case Files 06, 07 and 09.