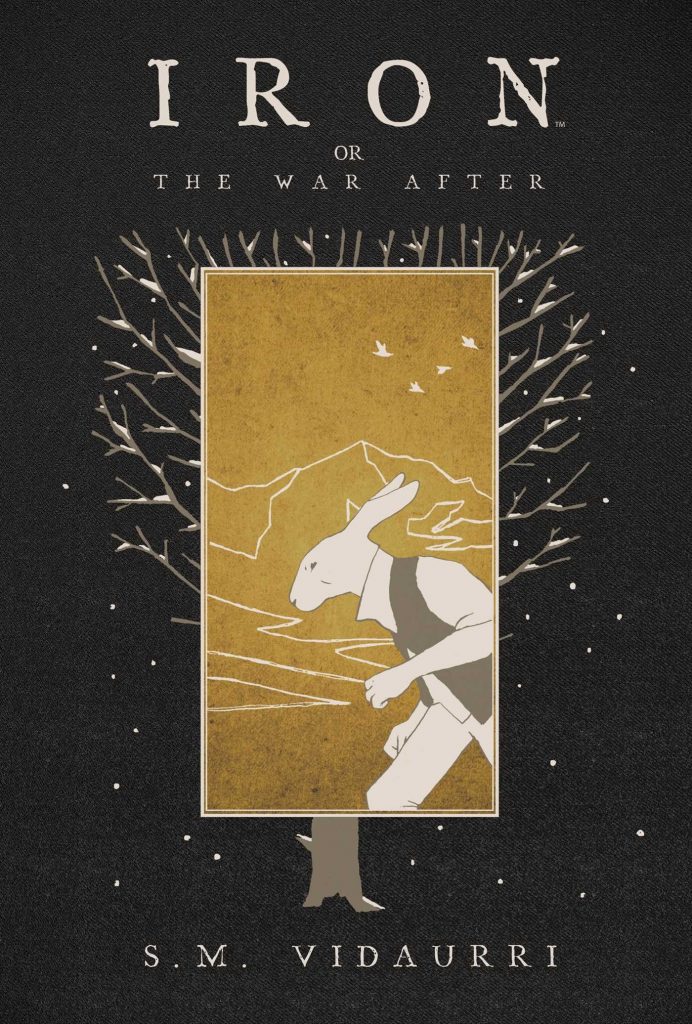 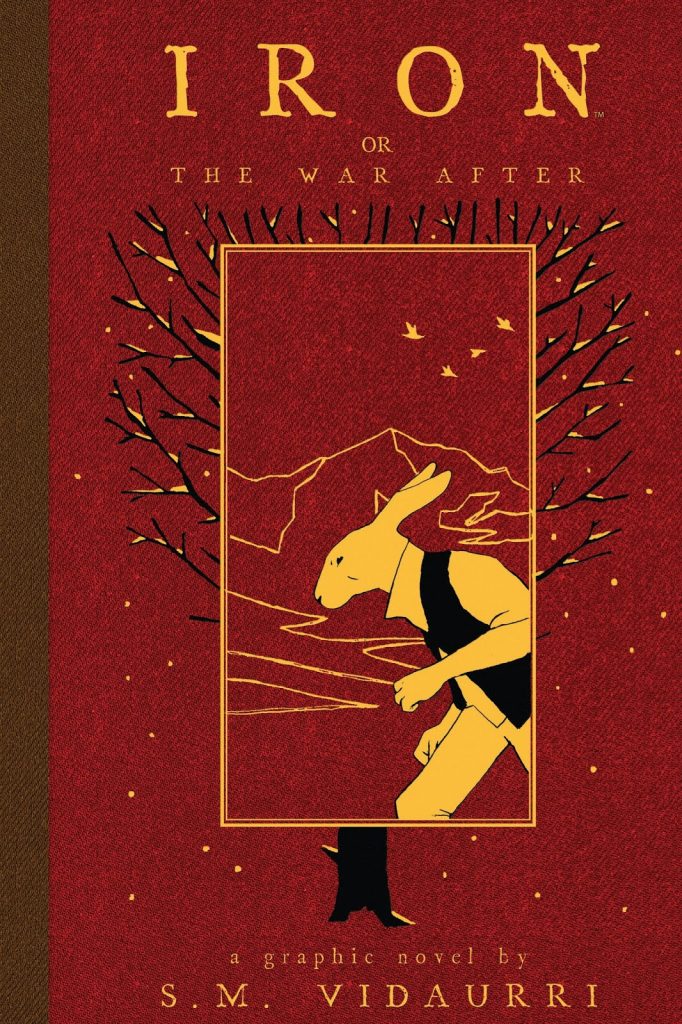 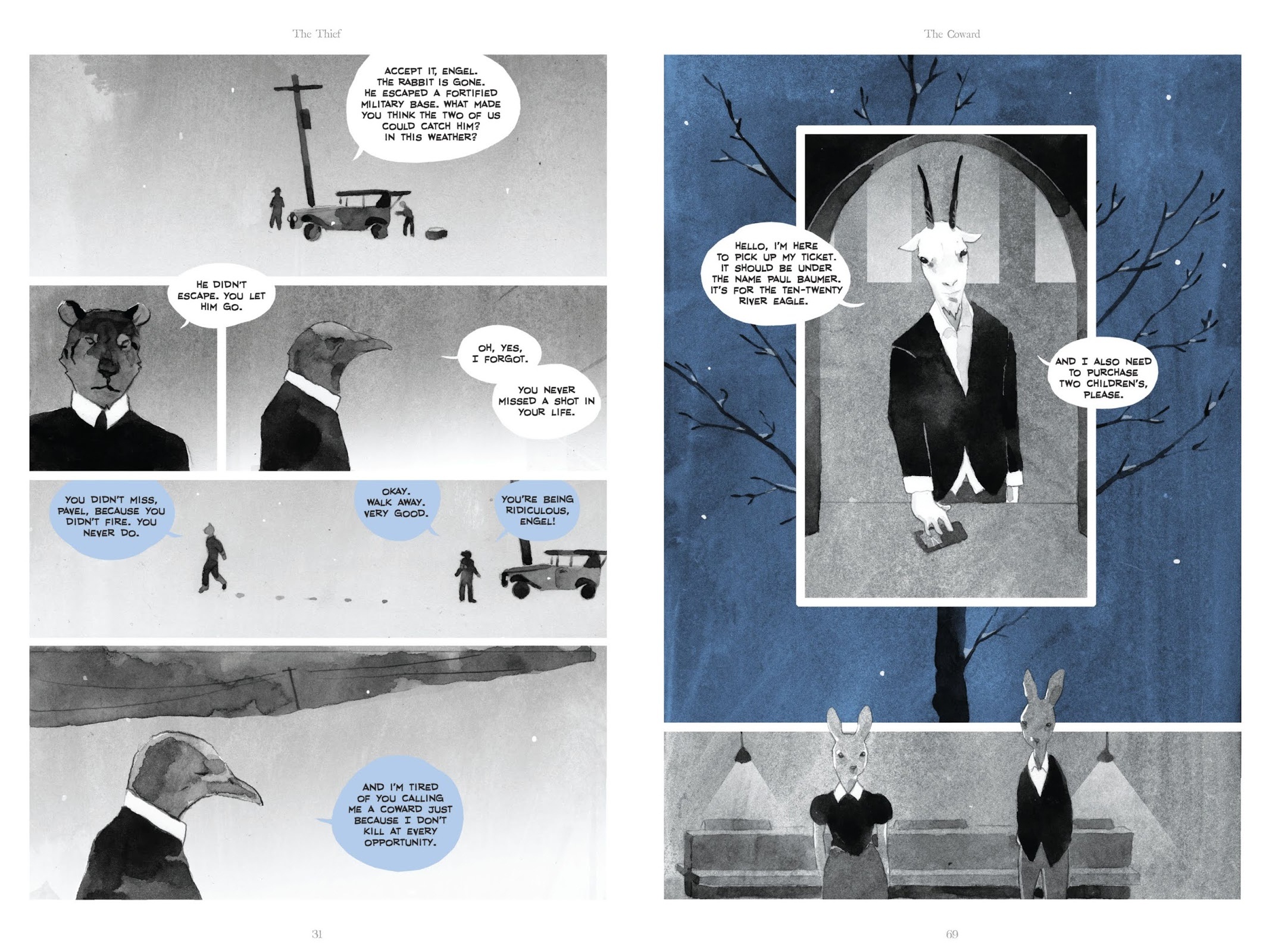 S.M. Vidaurri works very hard to establish an individual form of storytelling, and by and large succeeds in delivering something different with Iron or The War After. There’s his memorably designed art, a rich cast of humanised animals, the strange dual title, and the idea that momentous events of great consequence can occur in relative isolation among few people.

A war has divided a nation, and although ended there’s an active resistance to the now governing victors in a land that appears perpetually covered in snow. This information is pieced together very gradually, as Vidaurri isn’t dealing in specifics, but abstracts. We never learn, for instance, what the war was about, or any defined ideology, just about opposing forces. The book opens with Hardin having stolen some information. It’s been planned, and other notes, seemingly of greater importance, have also been taken to lay a false trail. Not everyone still fighting the otherwise finished war has Hardin’s dedication, and over the four chapters Vidaurri switches the focus with each new start, the story continuing from someone else’s view. Each, however, keeps an emotional distance, and that’s very much the narrative style, with the cast largely impassive, the art slowing the pace and the focus on small groups of characters to the exclusion of a wider world. Vidaurri also offers chapter titles, these interestingly open to interpretation, Which of two participants, for instance, is ‘The Patriot’?

Despite the apparent simplicity of the art, there’s a complexity to events, a manipulation to suit needs. As the story continues, Vidaurri introduces a growing sense of unease along with a thread of political repression, and this makes his list of inspirations interesting. He credits contrasting illustrators E. H. Shepherd and Andrew Wyeth, Erich Maria Remarque, the novelist best known for anti-war masterpiece All Quiet on the Western Front, and children’s authors Kenneth Graeme (The Wind in the Willows). The influence of each is obvious when revealed, with Wyeth’s sense of space paramount, but there’s also something of Graham Greene in his plot of deception, manipulation and excess.

It may seem perverse to take a minimalist and distanced approach to a story positively dripping with heavy emotion, but it packs a strong and affecting punch amid a humane message that wouldn’t have been achieved with more familiar storytelling methods. There’s plenty of space to effectively investigate big themes and although a familiar path is trodden, Vidaurri surprises several times.

Kudos also to Howling Monkey Studios for the book design. As well as a story you’ll want to read, this is a wonderfully textured book you’ll want to feel and one that stands out on a shelf with its rust and gold shades.

Iron or The War After is an excellently conceived, rewarding experience that’s remained a word of mouth recommendation rather than reaching the audience it deserves.