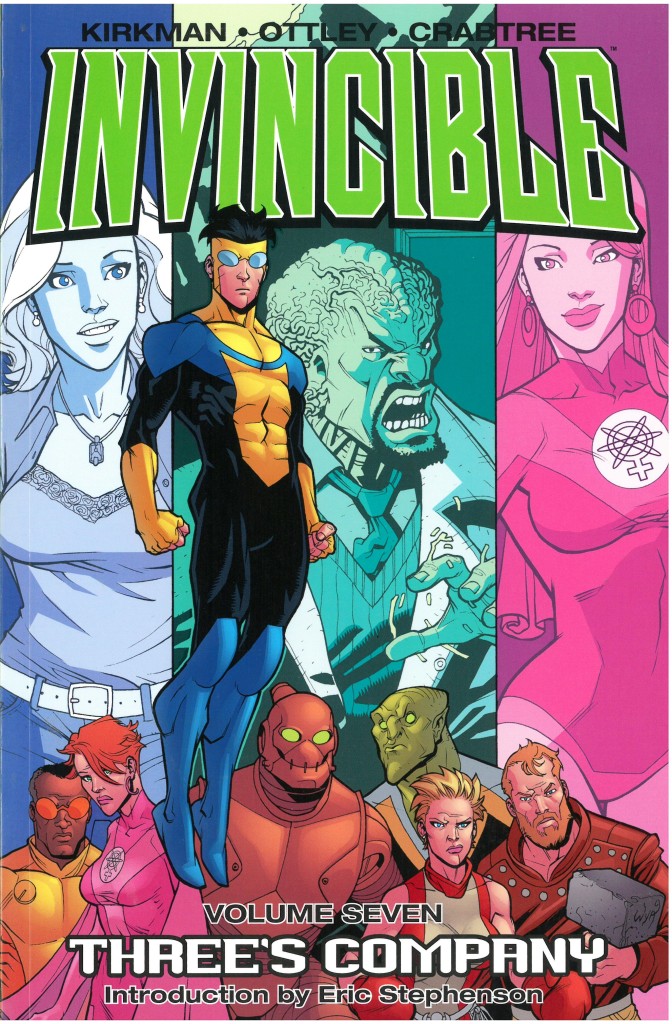 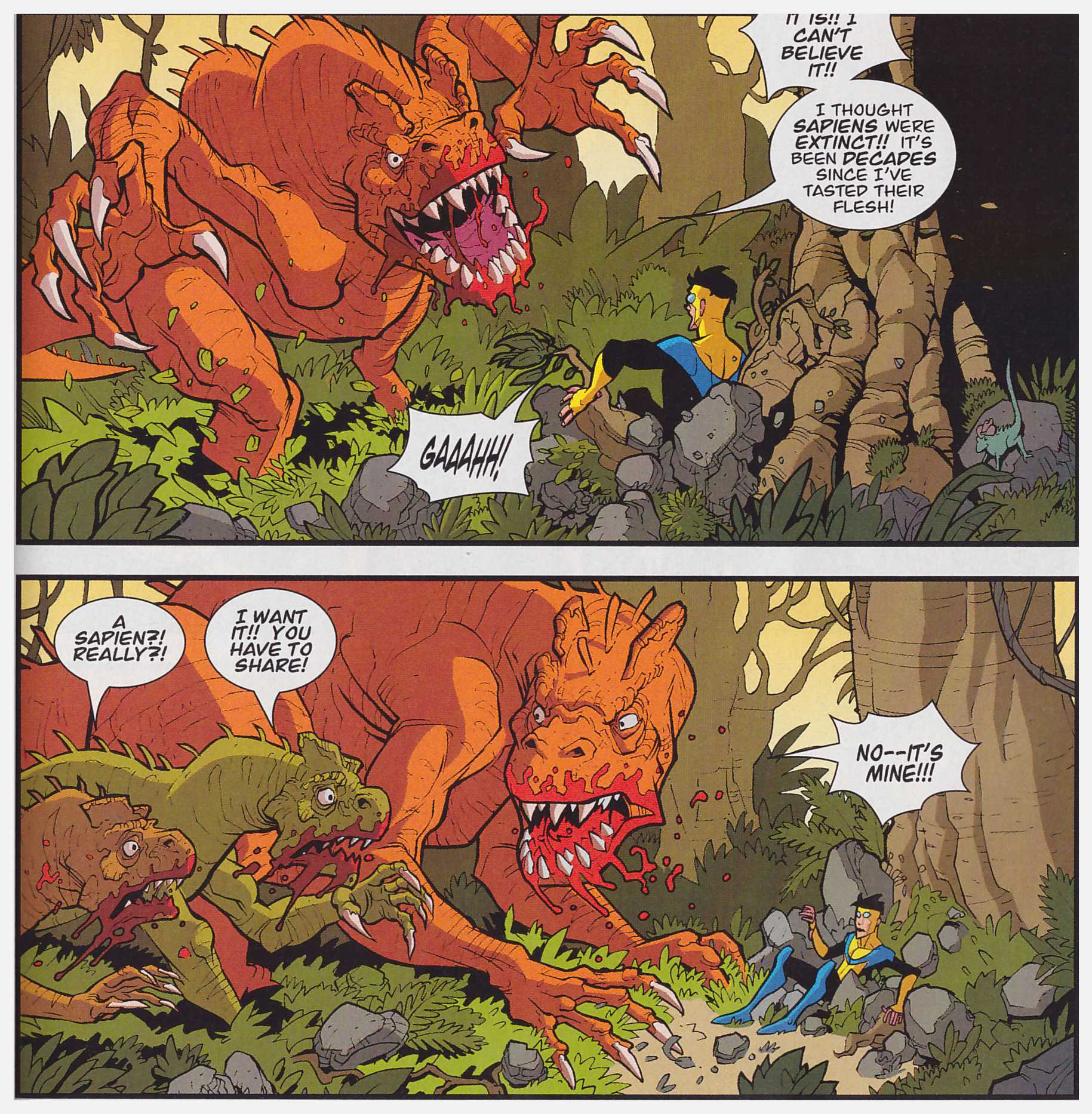 Volume seven of Robert Kirkman and Ryan Ottley’s ongoing superhero story opens with the new domestic arrangements introduced during A Different World at Mark Grayson’s house bedding in. Mark is also  Invincible, being of mixed human and Viltrumite parentage and as his moniker suggests, is an impervious superhero, righting wrongs, biffing bad guys and aliens and is a sometime associate of the Guardians of the Globe.

After a trip to an alien planet Mark returns and presents his human mother with an addition to her household, courtesy of her estranged husband, the Viltrumite, Omni-Man. He left the Earth after a fairly definitive father/son disagreement although they have subsequently made up. So given this slightly fraught home situation, Mark does what any normal young male would and leaves his mother carrying the baby whilst he heads off to Africa with his girlfriend to stay with his ex. All perfectly normal behaviour.

Elsewhere, following the curtailed trip to Africa, Invincible’s girlfriend Amber meets a guy in the library that may provide him with a neat solution to the girl-next-door vs beautiful-superheroine dilemma; within the Guardians of the Globe, Robot’s master uses Rex Splode’s DNA to have a new body cloned by the permanently bickering Mauler Twins; and their previous employer, Angstrom Levy pitches up again and exercises his beef against Invincible. In an effort to exact his revenge he tumbles Mark through various alternate realities until Mark finally resolves the situation, possibly permanently and thereby marooning himself in another dimension. His rescue, courtesy of an alternate Guardians of the Globe throws in another complication when the alternate Atom Eve helpfully informs him that she has always loved him. Now there’s a plight that training from an all-powerful alien father can’t help you with. This leads to an interesting section discussing relationships with Invincible’s tailor who also supplies a potential method to defeat the forthcoming invasion of Earth by Viltrumites. You don’t get that in Top Man. In another scenario that proves how far-fetrched the whole thing is, the government provide a tutor for the new member of the Grayson household, demonstrating their concern and care.

There are numerous storylines in Invincible and Kirkman’s skill lies in deftly interweaving them in and out of each other setting up potential future shenanigans. If he hadn’t made such a success of comics, you could quite see Kirkman writing for Eastenders, but the thought does allow for Atom Eve shouting out to a battling Invincible “Leave it Mark, that multi-limbed, death-ray wielding, alien octopus just ain’t worf it!”. Sadly, it’s not terribly likely. Yet even the most unlikely situations here, calling for the wholesale suspension of disbelief, have some form of hook and end on some form of cliffhanger that compels you to tune in again to see whose the baby is. Actually, in this volume, that’s not so far-fetched.

Ottley continues to depict the ongoing saga with bright, clean and sharp art that faithfully reflects the plot and it’s hard to imagine how another approach could work in this straightforward and linear story. The inclusion of issue 4 of The Pact at the back of the book, featuring Invincible and written by Kirkman but with his Super Dinosaur collaborator Jason Howard providing the art tends to prove the point. It might seem out of place, but given the way the Invincible story arcs break down, this would have been a very slim volume without it. Invincible is still recommended but you do need to start at the beginning to make sense of it. The series continues with My Favourite Martian.