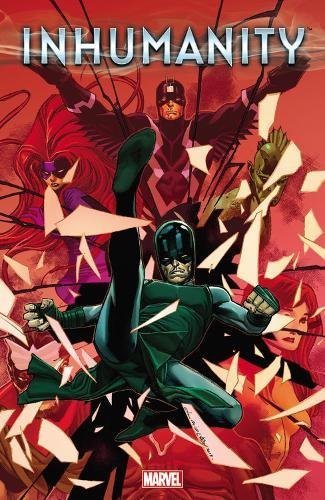 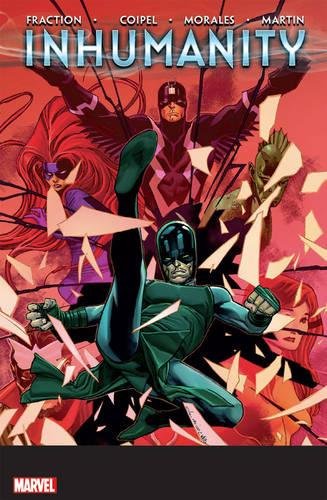 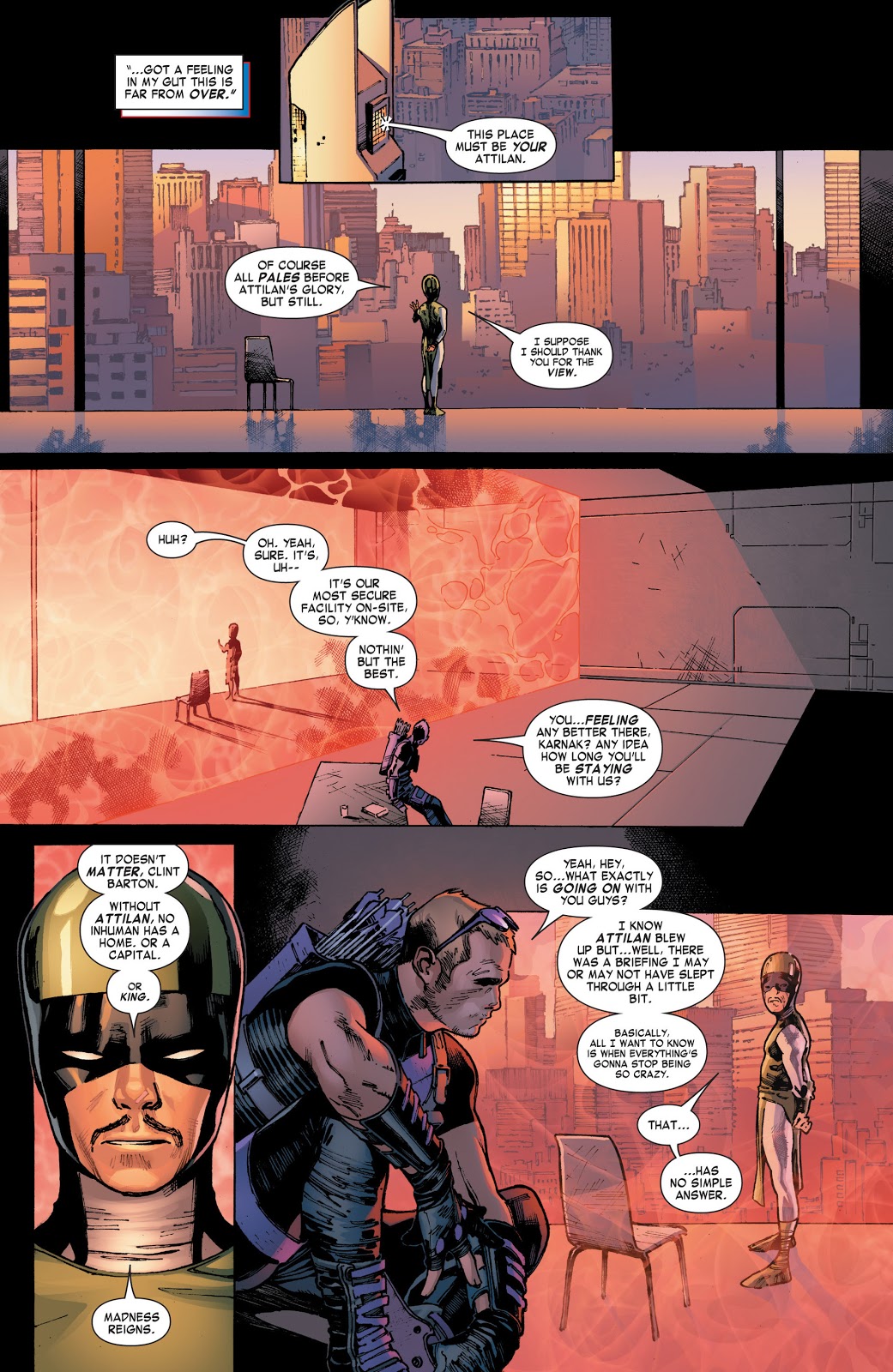 Inhumanity doesn’t begin well, not connecting unless you’ve memorised everything else occurring at Marvel around 2014. The important plot points of Matt Fraction’s dull opening episode are that some combination of Thanos, Black Bolt and Maximus has destroyed the Inhuman city of Attilan, consequently releasing their transformational Terrigen Mists around the world, sketchily drawn by Olivier Coipel (sample art). Ordinary people are now being encased in cocoons on a vast scale. Fraction’s second chapter is no more interesting than his first, but the concept broadens into stories written by others where the cocoons become matters of interest to assorted Marvel heroes. Most pick up with the emergence of transformed people.

That’s not the case for Mark Waid’s Hulk story, in which other superheroes may be scientific geniuses, but aren’t smart enough to avoid agitating Bruce Banner, after which a smart carrot is dangled in front of the Hulk. Five artists over three chapters, all of them rushed, drag this down, and missing the conclusion doesn’t help either. Iron Man is less irritating in his own story, but do you think the Mandarin’s deadly rings developing sentience is a good idea? Kieron Gillen did.

Five fun chapters have Kelly Sue DeConnick and Warren Ellis teaming Spider-Girl with individual Avengers as she tries to rescue her teacher. The complication is that he’s in a cocoon and he’s been abducted. Assorted mad scientists are fused with touching character moments. The Avengers as seen through ordinary eyes makes for a nice contrast, and if the art slips when Paco Diaz takes over from Matteo Buffagni, the good natured story wins through anyway.

A different set of Avengers feature alongside Daredevil dealing with a New York transformation. André Lima Araújo seems to be trying for Frank Quitely’s style, but while layouts and designs are exemplary, there’s an awkwardness to his figures. Sam Humphries’ plot is unusual for looking at an older person being transformed, but otherwise unmemorable.

Matt Kindt and Paul Davidson focus on a bunch of junior X-Men investigating transformations in a small town, telling some of their story as social media comments. Kindt’s humane plot finds time to explore the mutants alongside the two new characters, and a twitter feed running above the action scenes is a separate plot, but one worth following as it argues back and forth. It’s far better than another X-Men story by Brian Michael Bendis in which the women go shopping. It’s meant to be buddy bonding, but is twee and fake.

It’s the remarkable art of Stephanie Hans that distinguishes the Superior Spider-Man sequence, although she could do with some guidance concerning layouts. Christos Gage eventually arrives at an interesting ethical dilemma, but overdoes the final acknowledgements, and his Doctor Octopus in Spider-Man’s body isn’t quite the callous sociopath that Dan Slott wrote.

Inhumanity closes with Jonathan Hickman and Simone Bianchi focussing on the Illuminati of an alternate Earth. Hickman’s plots are invariably part of a bigger picture so individual stories presented in isolation lack the overall gravitas, and that’s the case here. The chapter is of significance to his Infinity story, but removed from the surroundings it comes across as a very ordinary piece introducing another bunch of pompous and all-powerful world conquerors.

Quality edges out the disappointing material in this collection, but not by a margin great enough to make it a must have buy. You might be better off just picking up Avengers Assemble: The Forgeries of Jealousy. Alternatively, the British version features eccentric cover credits, but earns an extra half star for being leaner and missing the Hulk, Iron Man and X-Men stories.