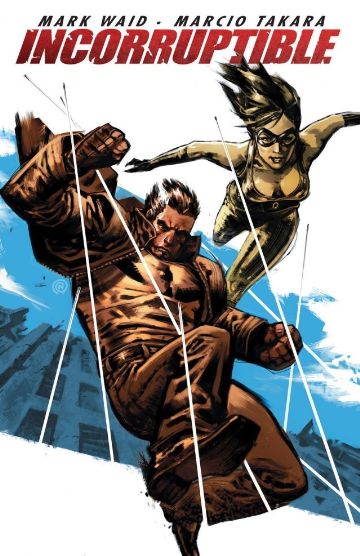 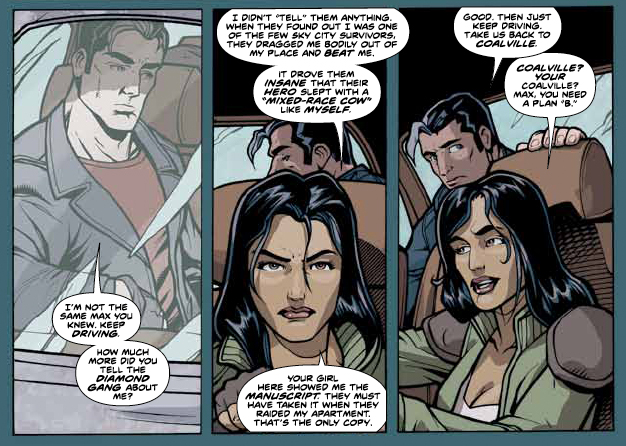 This third Incorruptible graphic novel opens with Max and Jailbait (Annie) head out to ground zero at Sky City where Plutonian’s rampage began, trying to track down Alana Patel. As Plutonian’s former girlfriend she would have had access to various secrets across the super-powered community, and the Diamond Gang had an unpublished document written by her in their possession (Vol. 2). Max wants to see if Alana is still alive, but his motivations are unclear. Whether this is to atone for his past sins against her or simply protect himself is known only to Max. Annie on the other hand is a celebrity junkie desperate to meet her. The Diamond Gang may be mindless Aryans but other people are becoming increasingly aware that the Plutonian’s planetary rampage has left a void for those with vision to fill. Stupid people can be ambitious and even the slightly smarter people can easily be manipulated by a bigger fish.

Mark Waid sets up some interesting developments as Max comes face to face with the consequences of his criminal past. Using flashbacks, he slowly provides more insight into Max and Jailbait/Terri’s relationship while introducing Alana. Horatio Domingues illustrates the book’s first half in a manga style that Marcio Takara imitates in the remainder. Of the two, Takara’s work is the more detailed and effective although his style in general tends to render the cast as too youthful, and works against the apocalyptic nature of the story. Both artists fail to convince with a supposedly apocalyptic setting that’s too glossy and shiny. Waid’s story is unique and stands out, but the art reduces it to standard comic fare, exacerbated by the cover gallery at the back of the book showcasing excellent work by Peter Nguyen, Jeffrey Spokes, Christian Nauck and Takara himself that promises more than what is on offer.

The story succeeds because Waid’s characters are complexly interesting and variously motivated, meaning they play off each other well. Max is bottling up his pain, while Alana is leaking her rage onto everyone. Max doesn’t care that people don’t trust him, but Alana secretly wants to be the centre of attention again. Armadale is trying to heal his pain and stick to sobriety, hilariously juxtaposed against an Annie (dubbed ‘Headcase’ due to her deathwish) who has found temporary solace in the bottle and beating people up, though not at the same time. It is difficult not to relate to the emotional characterisation. We’ve been there ourselves or know someone else who has. We may still carry the scars from our own pasts.  Waid’s wonderful scripting is what keeps this boat afloat in marvellous style and while it isn’t highbrow, it is massively entertaining.

This is a major artistic turning point for the series as Takara gets to grips with his own style, the illustration issues of the previous books just melting away from Vol. 4 onwards.