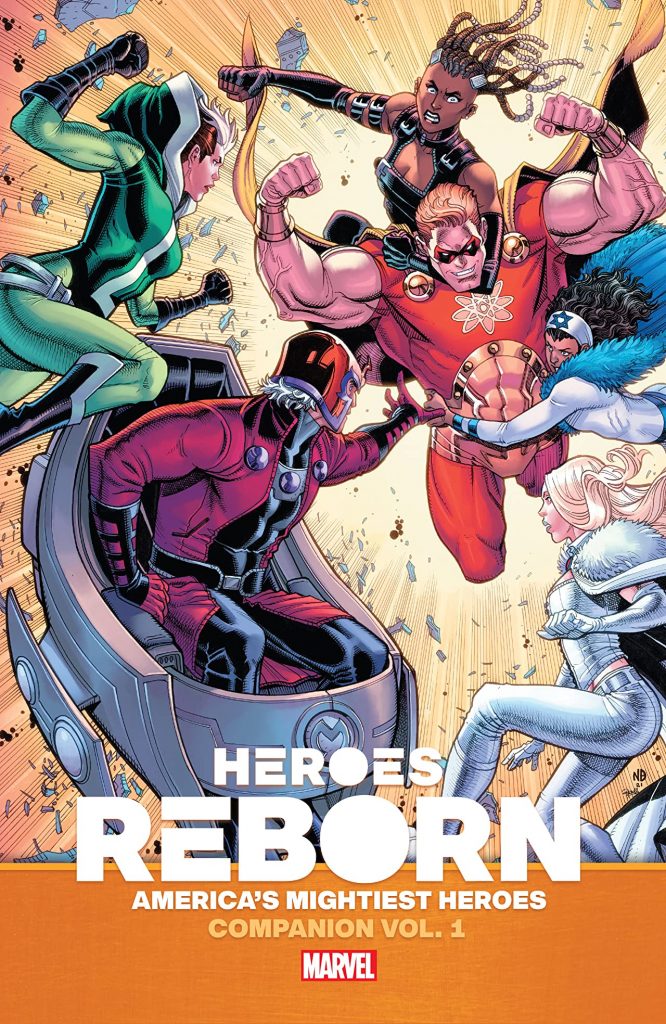 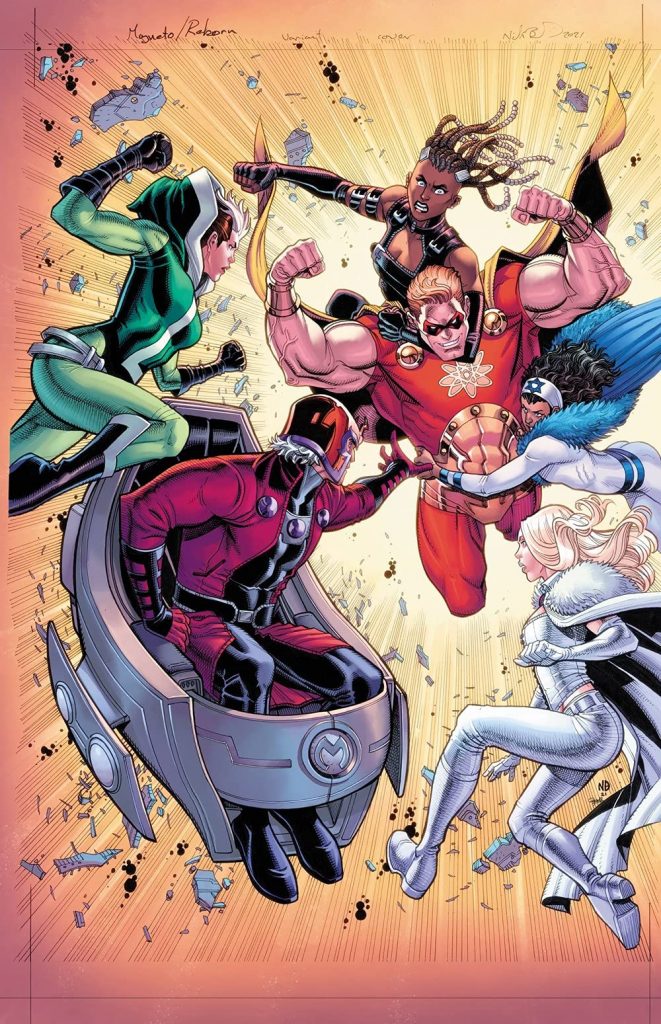 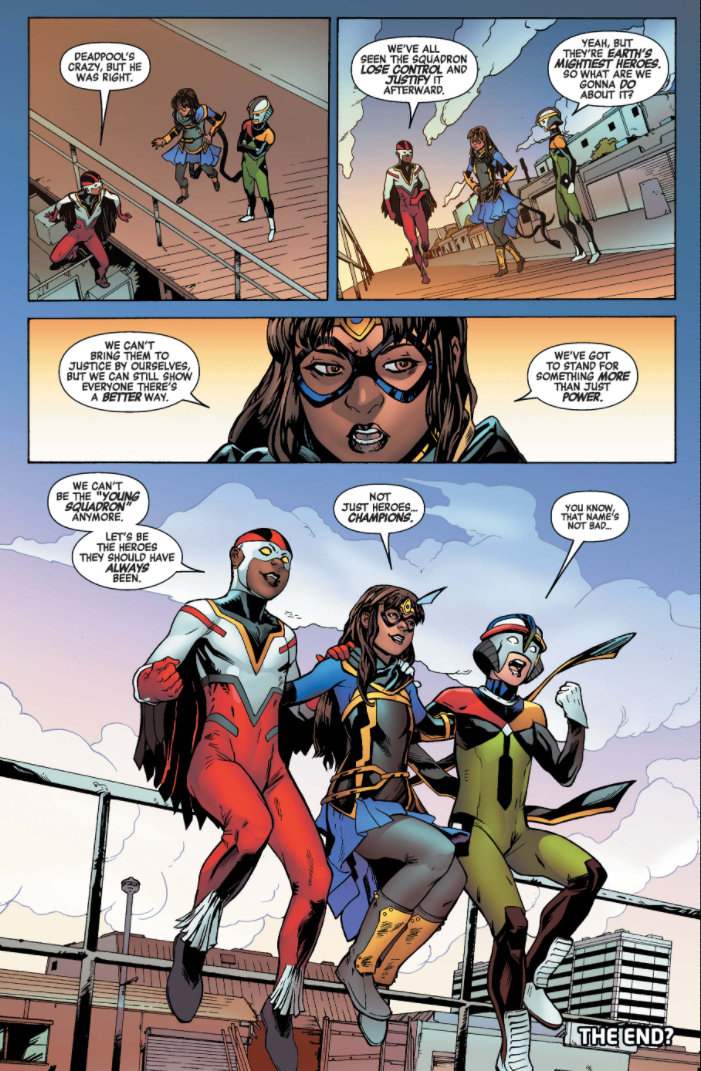 One positive thing about 2021’s Heroes Reborn event, which takes place in an alternate version of Marvel’s Earth, is that the linked crossovers don’t interrupt the regular runs of various titles. Instead Marvel published a series of one-offs, exploring various aspects of the world in which the Avengers never came to be, and the Squadron Supreme of America are the dominant superhero team. Most explore how Marvel’s usual superheroes have been transformed, or fill in a few bits of backstory to this alternate world. Each title has a different creative team, though presumably Jason Aaron has some sort of role co-ordinating everything. Few of the creators are A-listers, but perhaps that’s to be expected.

The idea of Hyperion, Marvel’s Superman equivalent, teaming up with the Imperial Guard, a pastiche of the Legion of Superheroes, and their Superman equivalent, Gladiator, in a story set in this world’s past, is intriguing. However, in the hands of Ryan Cady and Michele Bandini, it doesn’t quite work, not least because almost everyone is killed before the reader has time to get to know them. This story also loses pages to an alternate version of the Starjammers, by Cady and Stephen Byrne, who aren’t that different from the mainstream Starjammers. Peter Parker is re-imagined by Marc Bernardin and Rafael de Latorre as a Jimmy Olsen type, best friend of Hyperion, and this story links in directly to the Hyperion chapter in the main comic. The X-Men become Magneto and the Mutant Force, enemies of the Squadron, and Steve Orlando and Bernard Chang are most successful in filling in back story, but there’s little else to recommend it.

In the best tale here (see sample image), Miles Morales (Spider-Man), Kamala Khan (Ms Marvel), and Sam Alexander (Nova) are reimagined by Jim Zub and Stephen Cummings as three kid sidekicks of Squadron members. They come to realise that the Squadron are not deserving of the adulation that they give them, and decide to be better heroes. Finally, ‘Siege Society’, by Cody Ziglar and Paco Medina, is a group of super-villains, or perhaps anti-heroes in the Thunderbolts mode, several of whom (Natasha Romanoff, Clint Barton, and Scott Lang) have become heroes in mainstream Marvel continuity.

These stories recall the Amalgam comics from the 1990s. They too were a series of one-shots intended to open windows into a larger universe that was meant to be imagined as having all the depth and history of the Marvel and DC universes. On average, these stories are improved (Amalgam did happen in the the 1990s, after all), though there’s nothing here as good as Mark Waid and Dave Gibbons’ Super-Soldier. What the Heroes Return stories certainly are is a lot grimmer and more violent. There’s an awful lot of death here, as if to emphasise how much worse the Squadron’s Earth is, compared with that of the Avengers. All the Imperial Guard, several mutants, and even some members of the Squadron buy the farm, and by the end of their story, half of Siege Society are dead or imprisoned.

There’s nothing terrible in these pages, and these one-shots are probably better than the main narrative, but only ‘Young Squadron’ and ‘Siege Society’ really rise above mediocre, and you’re unlikely to want to revisit these comics. The rest of the one-shots are in volume 2. 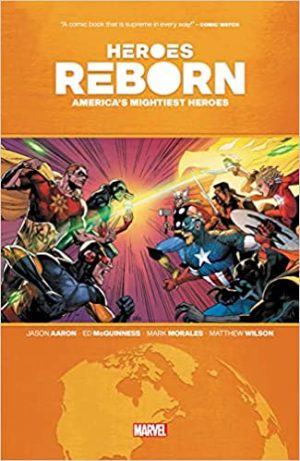 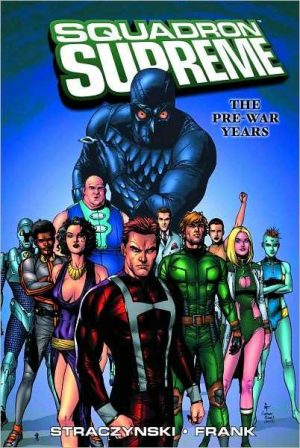