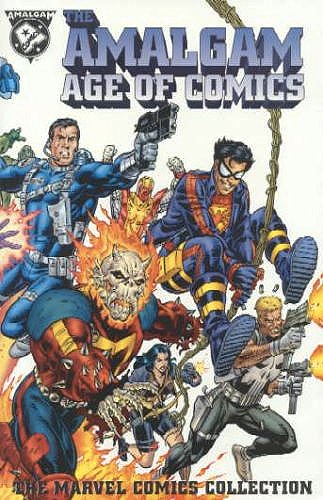 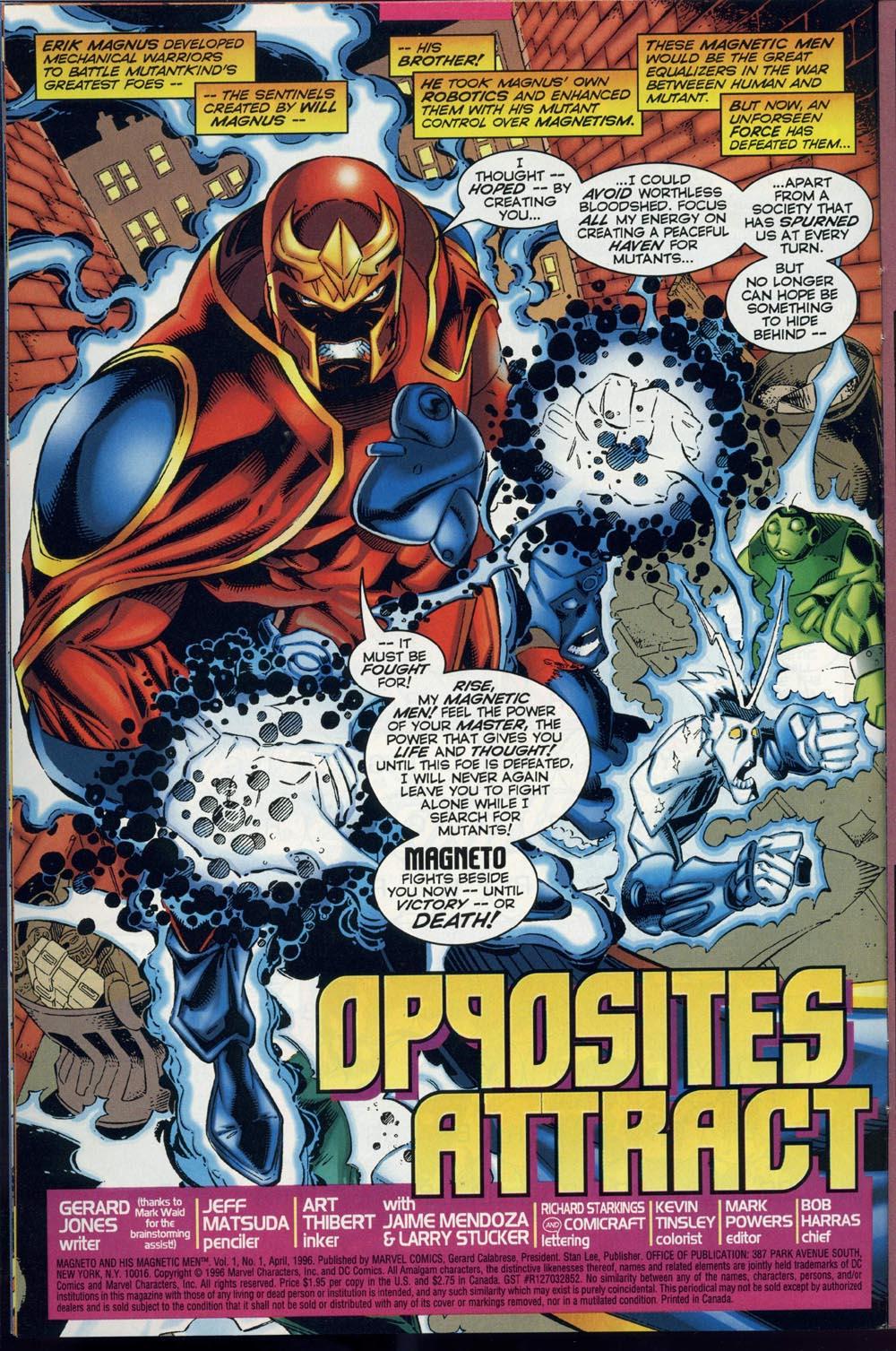 During the 1990s a renewed period of detente between the USA’s two major publishers of superhero comics resulted not only in the long delayed Avengers/JLA, but in four graphic novels in which their characters were smushed together. New hybrid creations appeared in one-offs featuring the merged attributes of a single Marvel character and single DC character, and each publisher issued two collections of this work.

It’s an interesting idea with possibilities, but with the considerable drawback of being published in the midst of the 1990s comic boom. This boom wasn’t due to quality, but to gimmicks and perceived investment value. More and more comics were published, the talent pool diluted and in hindsight the era is a creative cesspit. The exaggerated styles of popular artists became a template, and in this collection otherwise noteworthy superhero pencillers such as Roger Cruz and Salvador Larroca embarrass themselves imitating lesser talents.

The sample page is from Magneto and the Magnetic Men, an almost unreadable 22 pages of bombast based on the not unworkable idea of DC’s Will Magnus, creator of the Metal Men, and Marvel’s Magneto, Eric Magnus, being brothers with ideologically opposite viewpoints. However, to refer to Gerard Jones’ script as merely overblown is to diminish the inflation considerably, and Jeff Matsuda’s background free pages featuring large pin-ups are tailored more for resale value than storytelling. Yet, that’s not the worst on offer, which is X-Patrol. Cruz is obviously taking the piss with his anatomy free women, while Barbara and Karl Kesel adopt the style of Rob Liefeld’s X-Force comics without understanding why they were popular.

Another halfway decent concept mired in mediocrity is mixing the mythologies of Flash, Ghost Rider and Demon to provide Speed Demon. Howard Mackie and James Felder write this supernatural mess while Larroca’s crowded art has a rudimentary dynamism hinting at his future.

Gary Frank is a step ahead of that, but still draws in the spirit of the times for a teaming of a different looking Punisher and Diana Prince, secret agent, but with Wonder Woman’s bullet deflecting bracelets. Hence the Bullets and Bracelets title. They’re a bickering pair whose relationship soured when their infant son was abducted. John Ostrander throws in a lot of Apokalips villains without overcrowding the plot, and manages a surprise twist, but his heart’s not really in the idea and he’s written far better.

Chuck Dixon presents Bruce Wayne as an agent of S.H.I.E.L.D., making further use of characters also seen in the DC Amalgam graphic novel. This Bruce Wayne channelled his drive and anger into becoming a secret agent, and Dixon with Cary Nord delivers a rocket paced action thriller that’s fun enough if you don’t stop to unpick the plot.

It’s difficult to image any contemporary comic fan, unaware that Marvel and DC’s characters were once merged, looking at this with any kind of desire as it’s so cemented in the times. The single strip that isn’t provides the only creative success, but it’s a knowing pastiche of mid-1960s Marvel comics complete with villains clueing us in about their nefarious plans via thought balloons and a dizzying mix of characters with background roles. Karl Kesel’s Spider-Boy merges Spider-Man and Superboy, and it’s fast-paced fun leading to a good final page. Mike Wieringo cements this as the best offering by providing this graphic novel’s artistic highlights.

Sales determined a second run for the Amalgam superheroes, and Marvel’s next presentation is Return to the Amalgam Age of Comics. 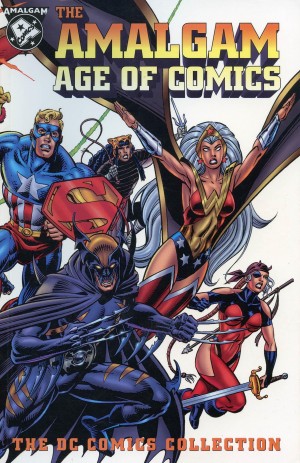