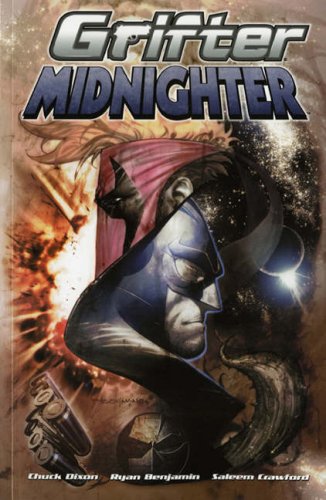 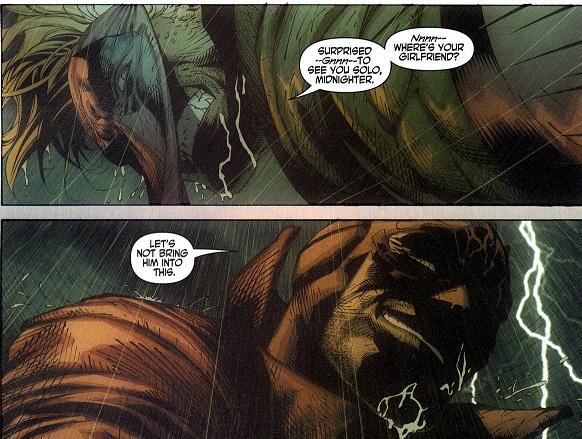 Theoretically Grifter/Midnighter should work. Individually both are interesting characters and their approaches to violence should make for an anarchic and wildly fun read. Midnighter is a gay and more violent pastiche of Batman who can strategise a million scenarios in a nano-second. Grifter can use his mind to manipulate targets with the terrifying efficiency of a super-villain. Both are expert hand-to-hand-combatants, both are sarcastic cynical gits, both get the job done by any means necessary. At the very least, the banter between the two might be extremely entertaining.

Writer Chuck Dixon and the artistic pairing of Ryan Benjamin (pencils) and Saleem Crawford (inks) start off promisingly with an epic battle between Midnighter’s team the Authority and some spectacular carnivorous worms. It plays out brutally before the scene pulls back on the Authority rescuing a catatonic Midnighter from an induced trance. Back on duty he experiences flashbacks of the worms, which are dismissed as post-traumatic stress, so he is reassigned to non-combat duties. Grifter performs black ops for the government but after ‘showing’ his handlers how his powers work, he is cut loose. Midnighter’s new assignment is protecting a hedonistic Saudi prince, incidentally Grifter’s target and after a tense stand-off the pair discover that the contract is a disguised alien entity named Zee who needs the help of both men and has information on Midnighter’s recent abduction. Zee reveals that Midnighter wasn’t dreaming, that the alien worms are real and the super weapons of an alien race. They are headed to Earth now, Grifter and Midnighter reluctantly dragged along to stop them despite a nagging suspicion that their new ‘employer is not all he/she/it seems.

The story goes well for about two chapters before the plot becomes looser, ploughing ahead at full steam without much sense. There’s barely a pause in the action, Grifter and Midnighter sniping at each other all the way. The humour is dark and irreverent, inappropriately funny, but very likely to offend with foul-mouthed slurs about being gay, having a mental illness, or references to inept jihadists. It fits the profile and personality of both characters but won’t be to everyone’s taste. The story itself is nothing new although there are some unexpected surprises. Investigating the pressures of being an openly gay superhero and a soldier with a mental illness could have made for an interesting and compelling story, but there was apparently more merit in poking fun at the subjects.

Ryan Benjamin’s and Saleem Crawford’s artistic efforts are not bad per se, the first few opening chapters better than the remainder, which is inconsistent. Characters look better in costume than out of it, close-up profiles presented from varying angles better than full-body shots. In places the art is too simplistic for the level of violence intended, in others (against aliens) it is great, the general rule being that the action is not easy to follow. With characters like these, the artists should have permission to let loose on the grit and gore but appear restrained from doing so for whatever reason.

Grifter/Midnighter had all the potential to be an excellent story that pushed the boundaries much like the original WildC.A.T.S. and The Authority titles did. If you like your monsters phallic-shaped and the story mindlessly entertaining, then Grifter/Midnighter might just be your cup of tea. Alternatively, you could give the better The Authority and WildC.A.T.S. books a look.