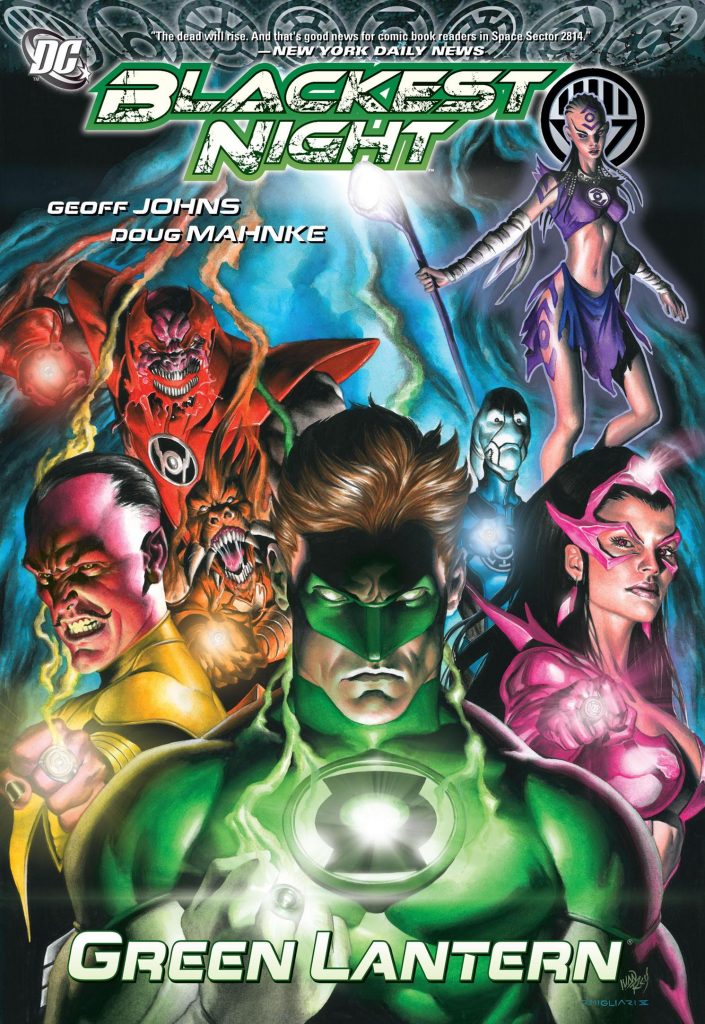 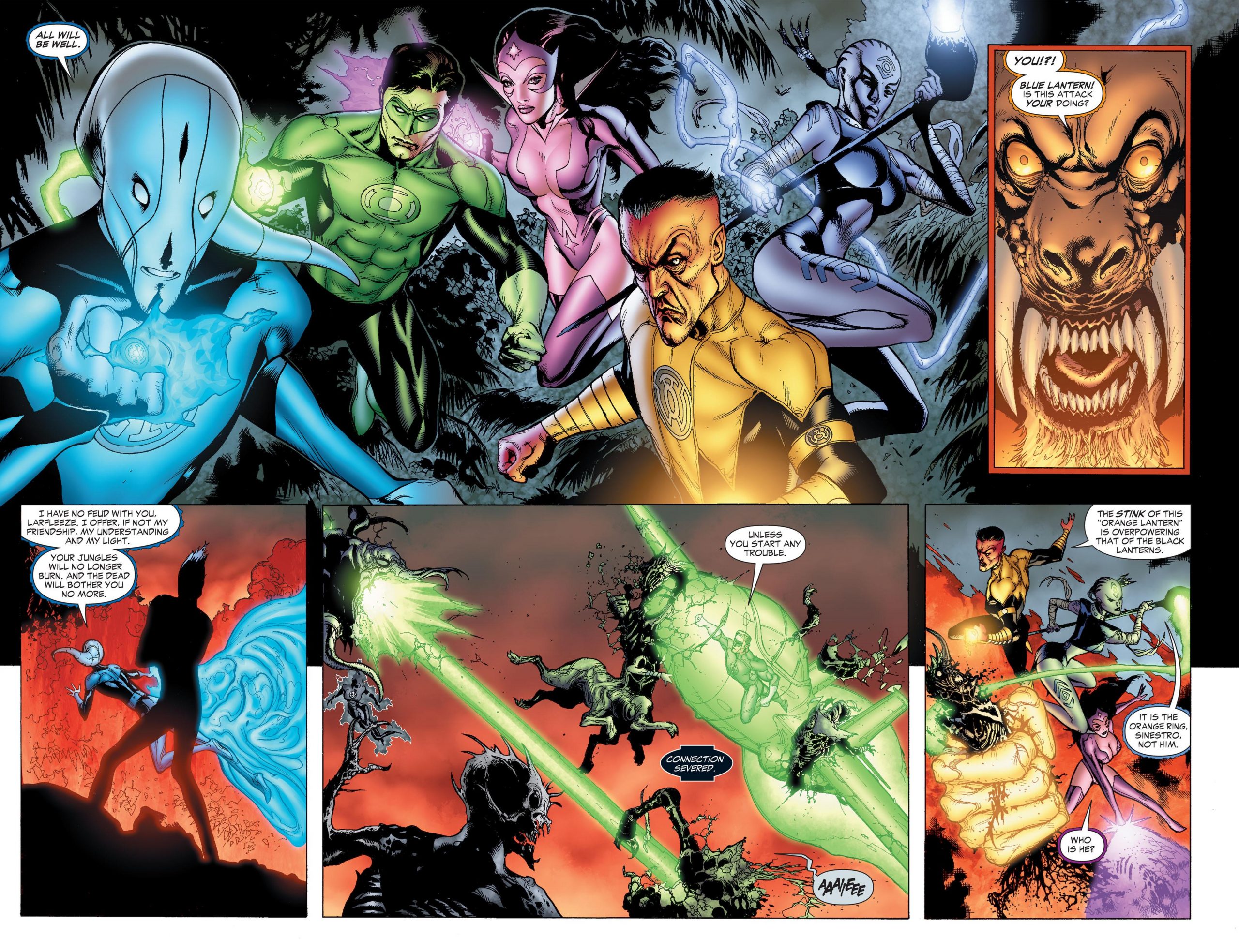 Geoff Johns spent a considerable amount of pages over the previous few Green Lantern graphic novels working toward Blackest Night, and this meaty collection should really be read in conjunction with that. This is despite both volumes beginning with the story of William Hand, who became Green Lantern’s enemy Black Hand, and then the first of the Black Lantern Corps, all revived from the dead to sweep across the universe. As drawn by primary artist Doug Mahnke, a tragic suicide is explicit and distasteful.

To begin with there’s a variety to the stories, as Johns takes a look at how the Black Lanterns are reshaping the world. He delivers a crowd pleasing Hal Jordan and Barry Allen team-up, followed by another chapter with which the Flash could also be involved from the way it zips from person to person and world to world, this time avoiding Jordan. He’s returned as Johns finally discloses the secrets of Abin Sur, the Green Lantern whose ring found its way to Jordan. From there the spotlight again spreads far and wide over the assorted ring corps, but this time in longer segments, which is more satisfying. As he moves around, Johns gradually reveals the little secrets held and the pacts made to have ensured one vision of the universe for millennia, now collapsing as the Black Lanterns rise.

With Green Lantern artist of choice Ivan Reis busy with the primary Blackest Night story, Mahnke draws almost all of this tie-in. His style is more distinctive than Reis, and he’s equally prepared to spend time on detail, while his Artrocitus and Larfleeze have a something repulsively alien about them. Ed Benes and Marcos Marz illustrate a chapter featuring the torment of John Stewart, which has some relevance to later events in revealing his marine duties, but Mahnke’s art is preferable.

Johns attempts to keep most of Green Lantern: Blackest Night readable without reference to main story, but because there are slight leaps in the continuity, text information provided between chapters keeps everyone up to date on the progress of the war against the Black Lanterns. This means Johns can concentrate on a cast that eventually distils to the leaders of each of the different Corps. He continues to throw in twists, though, with the return of Parallax one of the best sequences. People who know their Green Lantern history are going to be impressed at what Johns dredges up for inclusion, but there is going to be disappointment that it builds to an impressive crescendo only to discover that for the finale the core Blackest Night graphic novel is compulsory reading after all.

When it comes to wars involving large quantities of people, as it often does in Green Lantern, Johns wisely reduces the combat to an essence, using a handful of characters for the essential moments. It’s exemplified well with Blackest Night, but the difference here is the lack of quieter moments. This is nine chapters of mad rush from one crisis to the next with no let-up, and the story cries out for some respite somewhere along the way. There’s also the assumption that readers are going to know everything Johns has been building in Green Lantern, and while most probably will, it’s still a fair percentage who’ll be attracted by the crossover status only to be left confused as to who everyone is and their purpose. Regular Green Lantern readers will rank this higher. Brightest Day follows. 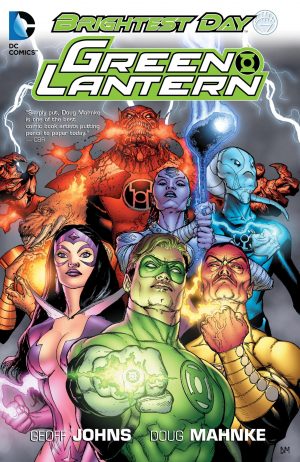 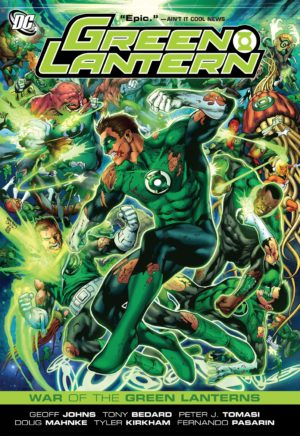 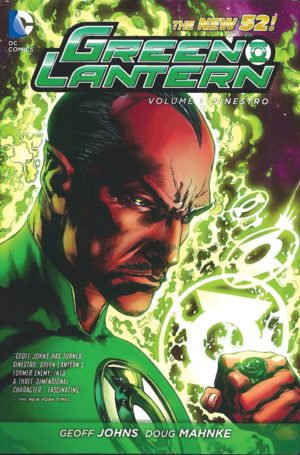 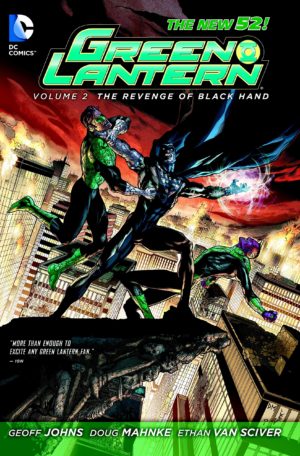