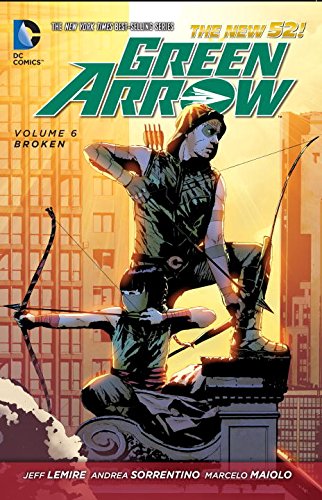 With Broken Jeff Lemire and Andrea Sorrentino end after three volumes of what was otherwise a dismal run for Green Arrow under the New 52 banner. Lemire was astute enough to strike a balance between the character familiar to several generations of comic readers while edging his material toward those attracted to the character via the TV series Arrow. That balance eluded other writers working on the series.

That said, at four chapters and a few extra pages, this is a very slim collection. The title story forms the bulk of it. While Green Arrow was away from Seattle (see The Outsiders War) the city was left without protection and the predators have moved in. He returns to learn the police have lost control of the city, there’s a significant bounty on his head and no shortage of willing claimants, and his best friend has been abducted.

We learn more about the past and as well as Oliver Queen we see two further Green Arrows, one announcing themselves as the future, which proves more than a glib soundbite. Over three chapters Lemire ties a bow around the material he’s generated, in the process delivering a taut and unpredictable thriller.

Sorrentino has progressed enormously as an artist since starting on Green Arrow, and takes further steps here. He’s always been good at a form of grainy naturalism, but to indicate events of the past he switches to bold colour-based outlines that are almost abstract in places. He works closely with colourist Marcelo Maiolo for a memorable effect.

Even better is a sequence that could only be effective in comics, as in the final chapter of ‘Broken’ Lemire and Sorrentino combine for a spread that compresses an enormous amount of information in ten panels. They then follow it with a spread equally as good. If you’re going to leave a series, this is the way to do it.

But they’re not quite finished. There’s ‘Futures End’ to deal with. This is one of series across all DC superhero titles in 2014 leaping ahead five years from the situation as last seen. Lemire’s set matters up well in ‘Broken’, and there are some surprises, but overall it’s more a prologue for the Futures End series, and doesn’t match the title story. Green Arrow continues under new creative team starting with Kingdom.