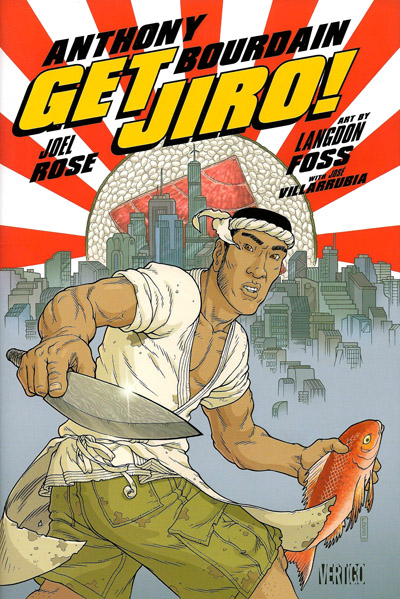 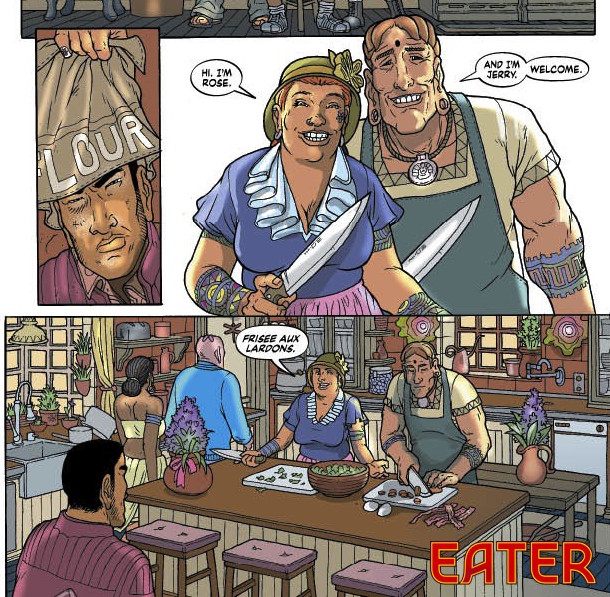 As graphic novels and food books continue to resist the book publishing downturn, it’s perhaps inevitable the two forms would be combined. Unsurprisingly, food and manga loving Japan has been ahead of the game with Oshinobo, a long-running docudrama exploring Japanese cuisine’s unique qualities and the hit family saga The Drops of God, which savours the joys of French wine. In the West, who better to rise to the challenge than bad boy master chef, Emmy award-winning presenter and bestselling author Anthony Bourdain, who in turn looks to Japan for inspiration in his graphic novel debut Get Jiro!

Co-written with novelist Joel Rose, there’s no mistaking Bourdain’s abrasive, irreverent voice in Get Jiro!, a broad, pungent satire that cuts a bloody swathe through American food culture. Get Jiro! is immaculately set in a near-future Los Angeles where food has overtaken music, film and sports as the national obsession, and celebrity chefs reign supreme.

Presiding over this dyspeptic dystopia are two culinary empires locked in a deadly turf war. In the blue corner is Global Affiliates managed by Bob, a sharp-tongued, commercially savvy restaurateur who exploits the gourmet pretensions of his patrons while saving the good stuff for himself. In the green corner, the healthier-than-thou Rose runs The Farm, a cult-like collective of locavores, vegetarians and macrobiotic avengers who commandeer the ethical high ground, while its leaders secretly indulge in the finest foie gras. Caught in the middle are the independent eateries and street food hawkers, eking out a living on the fringes of the city.

One such sole trader is Jiro, a taciturn, consummate sushi chef with a mysterious past and exemplary knife skills – whether slicing blue fin tuna or dispatching ill-mannered customers. When Bob and Rose discover Jiro’s existence they try to recruit him to their own cause, and he seizes the chance to play both sides off against each other. The ensuing mayhem is predictably violent, gastronomically enlightening and fitfully entertaining.

With a very deep bow to Kurosawa’s samurai epic Yojimbo, by way of Leone’s spaghetti western remake Fistful of Dollars, and a dash of Tarantino, Bourdain whips up a curious tale to air some of his pet peeves and passions. Yet despite being a lively romp for much of its length, Get Jiro! abruptly runs out of steam and bite in its closing scenes.

In his now customary harangue against the worst excesses of contemporary food culture, Bourdain targets the obvious – America’s inexorable drift towards an all-you-can-eat fast food nation – and then gets personal with sneering caricatures of two thinly disguised culinary sparring partners. Where Bob is a passable impersonation of Michelin man Alain Ducasse, Bourdain reserves particular venom for the sanctimonious Rose, a militant version of the doyenne of organic cuisine, Alice Waters. At the moral centre of this food fight, the reluctant iron chef Jiro battles to maintain his honour and purity of vision.

The novel’s overcooked characterisation is hardly helped by a wafer thin storyline that buckles under the weight of Bourdain’s well-worn shtick, undermining an otherwise promising premise. Thankfully, Get Jiro! is redeemed by acid dialogue, tasty asides on food preparation, cooking and eating etiquette, and Langdon Foss’s expressive, precise draughtsmanship and vivid colour palette.

It’s hardly a revelation to learn that Bourdain was a serious comics fan who once fancied being an underground artist in the mould of Robert Crumb. While he may have channelled that youthful creative zeal and rebellious streak into his cooking, Get Jiro! reunites the inner geek with the showman for a bombastic, boys’ own fantasy that sizzles but fails to fully impress.