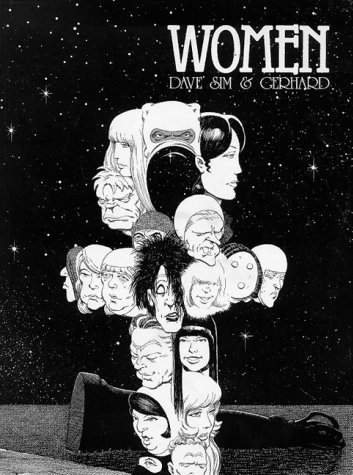 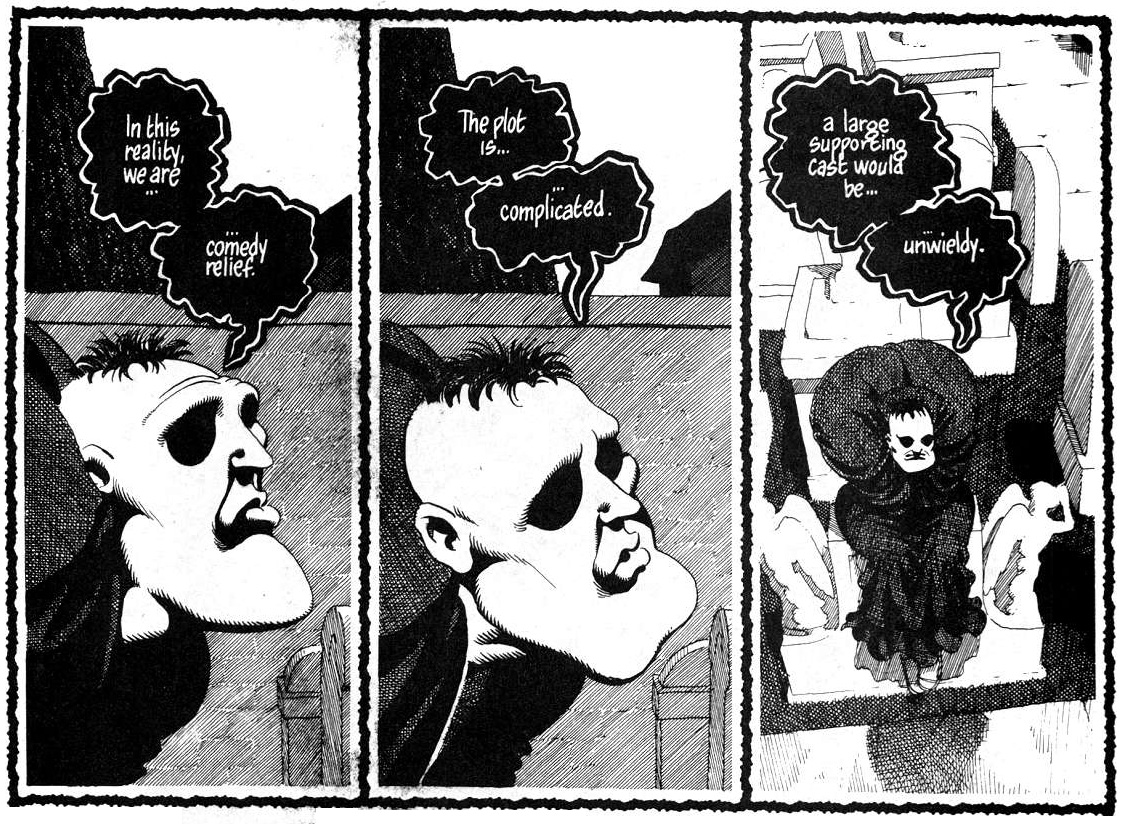 Flight ended with a miniature, flying version of Cerebus appearing to both Cirin and Astoria, before he winked out of existence. This volume begins with two text pages, one by Astoria and one by Cirin, before picking up where that book left off. Artemis Strong, AKA PunisherRoach, has fallen in love with a prostitute, Astoria is preparing for her meeting with Cirin, and Cerebus pops back into normal existence having wandered through the Seventh and Eighth Spheres for the last couple of hundred pages.

If this isn’t making much sense, you’ve clearly not read all the earlier books, and we don’t have space (or inclination) to summarise everything that’s gone before. Short version: Cerebus started out as a parody of Conan before morphing into a political and then religious satire that got increasingly mystical, convoluted and controversial as time went by.

Anyway, Cerebus has reappeared, though unfortunately it’s hundreds of feet in the air. He falls, crashes through a window, and finds himself with an old woman whom the Cirinists have under house arrest. She tells Cerebus to hide in a tavern, as the Cirinists won’t enter. There then follows lots of typical Cerebus fare: visions, mystical happenings and philosophical conversations. Light relief is provided by a heartbroken PunisherRoach, who transforms into Swoon, a piss-take of Neil Gaiman’s Dream from Sandman, with Elrod (himself a parody of Michael Moorcock’s Elric of Meliboné) assuming the guise of Snuff, Swoon’s sister.

Lord Julius also puts in a welcome reappearance, with his pages amongst the many that abandon the convention of speech bubbles and instead print conversations as blocks of text, normally with an accompanying illustration. The book is also peppered with tracts from both Cirin (another aardvark, and leader of the Cirinists) and Astoria (the leader of the Kevillists, though they refuse to accept anyone as leader, of course) who get to put forward their contradictory arguments on a variety of subjects. Cirin and Astoria represent the mother and daughter of the title, and the text pieces are intended to show flaws in feminist thinking, or flaws in women in general. This is certainly a book that gives you a great deal of reading for your money. And a lot of food for thought, with Sim having mulled much of this over for years. You can accuse Dave Sim of many things, and people have, but lacking focus isn’t one of them.

At this point Cerebus was losing readers, and the situation would only worsen with later books, as Sim apparently pursued a path of career suicide which continues to this day. This is a great shame, as this book ably demonstrates, he is an accomplished writer and artist with a great deal to say.

Any readers that have persisted this far will find much to admire and appreciate here, not least of all the superb artwork, imaginative page layouts and beautiful background work by Gerhard, and repeated readings reveal how smart and well-constructed the entire series is, but it definitely isn’t for everyone.