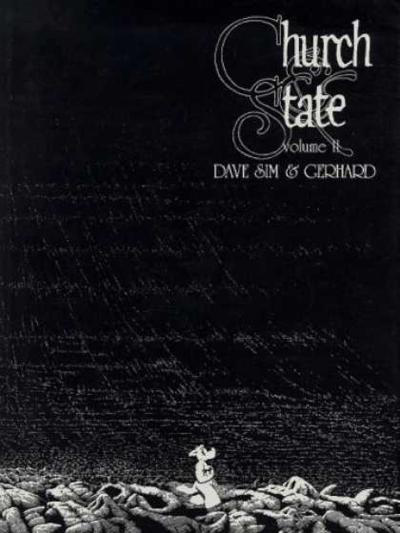 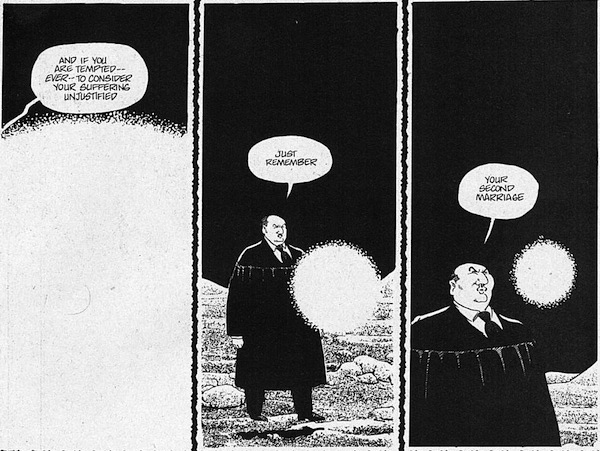 Church and State 2 makes it clear from the start, which in this case is page 595, that this is the second half of a book. If you haven’t read the previous volume, go and do so now. We’ll wait.

Dave Sim’s plot is going to sound bonkers, though it all makes sense, of sorts, if you’ve read the earlier books. Cerebus has been thrown off the tower (which is mysteriously growing) by Thrunk, a giant rock-monster. He returns, only to be dragged into complex religious matters that imply, Battlestar Galactica-style, that everything “has happened before, and will happen again”, and they’re all doomed to play out their parts in a constantly-repeating pattern. We also have a rape which upset readers even more than the baby-tossing from the previous volume. And, as always, there’s comedy, whether it’s Mick and Keef (Jagger and Richards) or the Roach’s latest incarnation, who spends much of this book obsessed with the Secret Sacred Wars.

It transpires that whomever stands atop the tower with a perfectly-cast gold sphere will ascend, to heaven or some equivalent. Weisshaupt had intended that it would be he who ascended, but it’s Cerebus who is atop the tower when it breaks off and flies towards the moon. Then, in a rare crossover with another title, Cerebus meets Flaming Carrot, a character that makes a talking aardvark seem pedestrian: a lunatic wearing a huge flaming carrot head (hence the name) and a pair of flippers on his feet (hence the lunatic). Flaming Carrot flies off, and, after a fight with a three-headed monster (another reappearance from the early days) Cerebus lands on the moon. He has a long telepathic conversation with the Judge (based on actor Lou Jacobi), who tells him how the world will end and also how Cerebus’s own life will end. Without spoilers, let’s just say that it’s not good news. Cerebus awakes, back home, and discovers that the Cirinists have invaded and take his gold.

One critic’s assessment was that the story’s ending was “too darn cosmic”. Which Sim called “moronic… in a medium where the blowing up of the universe and getting superpowers from radioactivity are the norm rather than the exception”. One can see Sim’s point, but it would be fair to say that blowing up universes and getting superpowers from radiation aren’t what those stories are normally all about, they’re just plot devices. Whereas this book attempts an intelligent examination of forces, be they human, religious, metaphysical, quantum mechanical or other, rather than a deus ex machina followed by 22-pages of fights in tights.

There is an epilogue published later, and collected in Cerebus Zero. Sim hoped to include it, but this book, the largest of the series at 630 pages, literally couldn’t be any thicker, as the binding wouldn’t hold.

Church and State 2 is the largest of a series unequalled in comics in terms of size and scope. It’s been described as Sim’s attempt at War and Peace in comic form, something at which it largely succeeds. Its attempts to be taken seriously as literature are leavened with a great deal of well-executed comedy. While it might be a bit too spacey for some, there’s a great deal to admire in a book that’s packed with beautiful artwork and thought-provoking writing. Cerebus continues with Jaka’s Story.